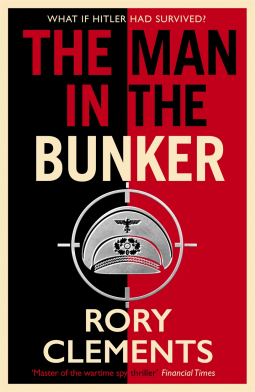 Germany, late summer 1945 – The war is over but the country is in ruins. Millions of refugees and holocaust survivors strive to rebuild their lives in displaced persons camps. Millions of German soldiers and SS men are held captive in primitive conditions in open-air detention centres. Everywhere, civilians are desperate for food and shelter. No one admits to having voted Nazi, yet many are unrepentant.

Adolf Hitler is said to have killed himself in his Berlin bunker. But no body was found – and many people believe he is alive. Newspapers are full of stories reporting sightings and theories. Even Stalin, whose own troops captured the bunker, has told President Truman he believes the former Führer is not dead. Day by day, American and British intelligence officers subject senior members of the Nazi regime to gruelling interrogation in their quest for their truth.

Find The Man in the Bunker (Tom Wilde #6) on Goodreads

Rory Clements’ books featuring Cambridge professor turned spy, Tom Wilde, have become one of my absolute favourite series. I’ve devoured every one of them and The Man in the Bunker was no exception. (I’m also a fan of his John Shakespeare series set in Elizabethan England.)

Who do the intelligence services in Britain and the United States call on when they’ve a tricky problem to solve? Why Cambridge professor of history turned spy Tom Wilde of course – much to the exasperation of his wife, Lydia, in this case.

The brilliantly dramatic and chilling opening chapter is a prelude to everything you could possibly want from a spy thriller: plenty of action scenes, car chases, narrow escapes, assassins waiting in the shadows, wily and ruthless villains, double-crosses galore. There are also a host of interesting secondary characters, such as the colourful Boris Minsky, Jerzy ‘the boy with the camera’ and the dedicated Dr. Angie Gray.  The skilfully crafted plot means there are plenty of side stories the reason for whose inclusion remains deliciously intriguing for a large part of the book.

Wilde is assigned a companion in his investigation, Lieutenant Mozes Heck. Heck is a wonderfully drawn character. Whilst, as readers of the previous books will know, Wilde has his own share of traumatic memories, Heck’s are beyond imagining. His first-hand and very personal experience of the atrocities committed by the Nazis has given him a deep-seated hatred of those Nazis who survived the war and ‘an overpowering hunger’ for revenge. As a result he is utterly ruthless – shoot first, think later – meaning at times he is difficult for Wilde to control.  ‘Heck was in a blood-red world of his own, and no amount of reasoning was going to alter that.’ On the other hand, Heck’s sharp-shooting skills, physical resilience and ability to pass unnoticed are definitely things you want in a difficult situation, and Wilde and Heck experience plenty of those.

Wilde’s investigation into whether Hitler remains alive takes him to the heart of post-war Germany giving the reader a vivid insight into the destruction visited upon cities such as Berlin by Allied bombing and the advance of the Russian army.  ‘This is real life, this is the detritus of war, right here.’ Berlin has become a place of ruined buildings, piles of rubble and people trying to eke out a living in the shattered remains of their city. It’s a dangerous place as well.  ‘The problems start after dark when the desperate and the dispossessed come out and defy the curfew. It’s kill or be killed.’

There also unsettling scenes in the makeshift camps for people displaced by the War including those who survived the concentration camps. And a visit to a particular site in Berlin brings Wilde a chilling reminder of the evil of the Nazi regime. ‘He did not believe in the occult, nor even an afterlife, yet he could hear the children’s cries.’

I can’t say much more about the plot without giving too much away. But, I hear you ask, does Wilde discover if Hitler survived the Berlin bunker? Sorry, not telling. Read the book and find out.

I thought The Man In The Bunker was absolutely fabulous, another masterly spy thriller from the pen of Rory Clements. A few loose ends left subtly dangling at the end of the book leaves me hoping this is not the last outing for Tom Wilde. In the meantime Tom, Lydia deserves her holiday. 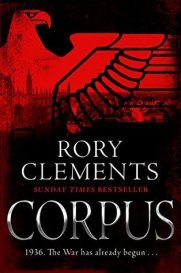 Rory Clements was born on the edge of England in Dover. After a career in national newspapers, he now writes full time in a quiet corner of Norfolk, where he lives with his wife, the artist Naomi Clements Wright, and their family. He won the CWA Ellis Peters Historical Award in 2010 for his second novel, Revenger, and the CWA Historical Dagger in 2018 for Nucleus. Three of his other novels – Martyr, Prince and The Heretics – have been shortlisted for awards.

To find out more about The Man In The Bunker and the previous books in the series, join the Rory Clements Readers’ Club via the link in his website. (Photo credit: Author website)