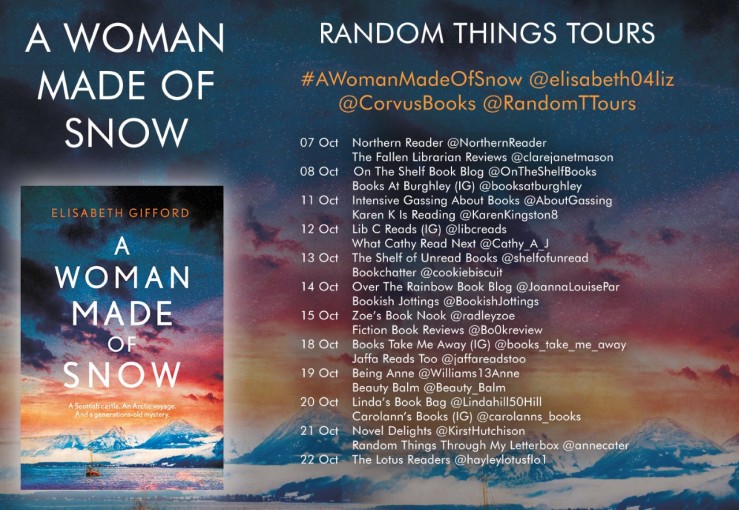 Welcome to today’s stop on the blog tour for A Woman Made of Snow by Elisabeth Gifford. My thanks to Anne at Random Things Tours for inviting me to take part in the tour and to Corvus for my digital review copy.

A gorgeous, haunting and captivating novel of a century-long family mystery in the wilds of Scotland, and one woman’s hunt for the truth.

Scotland, 1949: Caroline Gillan and her new husband Alasdair have moved back to Kelly Castle, his dilapidated family estate in the middle of nowhere. Stuck caring for their tiny baby, and trying to find her way with an opinionated mother-in-law, Caroline feels adrift, alone and unwelcome.

But when she is tasked with sorting out the family archives, Caroline discovers a century-old mystery that sparks her back to life. There is one Gillan bride who is completely unknown – no photos exist, no records have been kept – the only thing that is certain is that she had a legitimate child. Alasdair’s grandmother.

As Caroline uncovers a strange story that stretches as far as the Arctic circle, her desire to find the truth turns obsessive. And when a body is found in the grounds of the castle, her hunt becomes more than just a case of curiosity. What happened all those years ago? Who was the bride? And who is the body…?

Find A Woman Made of Snow on Goodreads

I’ve become a great fan of Elisabeth Gifford’s books having read and enjoyed The Sea House, The Lost Lights of St Kilda and my absolute favourite, The Good Doctor of Warsaw. I’m pleased to say A Woman Made of Snow incorporates all the elements I’ve enjoyed in previous books: fascinating period settings, atmospheric locations, a combination of mystery and love story, and a cast of well-crafted characters. I mean, what more do you want from a work of historical fiction?

The book moves back and forth in time between 1949 and a century earlier focusing on the inhabitants of Kelly Castle through the years. Caroline (Caro) is trying to balance the demands of motherhood with her desire for independence.  She finds living at Kelly Castle difficult to get used to whereas for Alasdair, away for much of the day at work, it seems so easy to adapt to its routines. ‘A map of Alasdair would have clear lines, useful for going places. A map of herself, Caro realized, would be full of shaded liminal areas, still in the process of becoming, coastlines up for discussion.’ Caro is also trying to navigate the tricky relationship with her mother-in-law, Martha, who seems to find fault in much that Caro does, whether that’s the names she calls things – ‘mirror’ rather than ‘looking glass’ – or the way she looks after her daughter.

Charlotte, Caro’s counterpart in the earlier timeline, is facing a similar conflict between the expectations of society and a desire for personal freedom: to go where she wants to, dress how she wants, to eschew marriage. Despite being financially independent, she still finds the world a place dominated by men and where double standards apply when it comes to men’s and women’s behaviour. ‘It was a bitter truth to learn, that men may wade through all kinds of muddy waters and come out smelling if not sweet, then at least acceptable. Not so for a woman.’  Charlotte’s affection for a member of the Gillan family, destined to remain unrequited, nevertheless inspires a loyalty and sense of duty that will remain unacknowledged for years.

For me, the standout sections of the book were those set in the Arctic aboard a whaling ship. These positively oozed atmosphere, capturing both the beauty of the scenery and its inherent dangers – the intense cold, the risk of frostbite or of ships becoming icebound or even crushed in the shifting ice. It also introduced me to a way of life I had limited knowledge of before, about which I’ll say no more so as not to spoil your enjoyment of the story.

As well as being an intriguing mystery and a touching love story, what I enjoyed about the book was the way it explored more serious issues such as gender and social inequality, and racial prejudice. The latter is demonstrated in the most dramatic way by an act so despicable it left me reeling.

Those who enjoy the mystery element of a story will be gripped by the gradual accumulation of clues about the identity of the body found in the grounds of Kelly Castle. Mirroring the research that goes into writing a work of historical fiction this involves perusing diaries, letters and photographs. Prepare to be surprised when the answer is finally revealed, and to find yourself a little tearful at the end of the book.

A Woman of Snow is another thoroughly absorbing and satisfying read from the pen of Elisabeth Gifford.

Try something similar: The Secret by Katharine Johnson

Elisabeth Gifford grew up in a vicarage in the industrial Midlands. She studied French literature and world religions at Leeds University. She has a Diploma in Creative Writing from Oxford OUDCE and an MA in Creative Writing from Royal Holloway. She is married with three children, and lives in Kingston upon Thames. A Woman Made of Snow is her fifth novel.