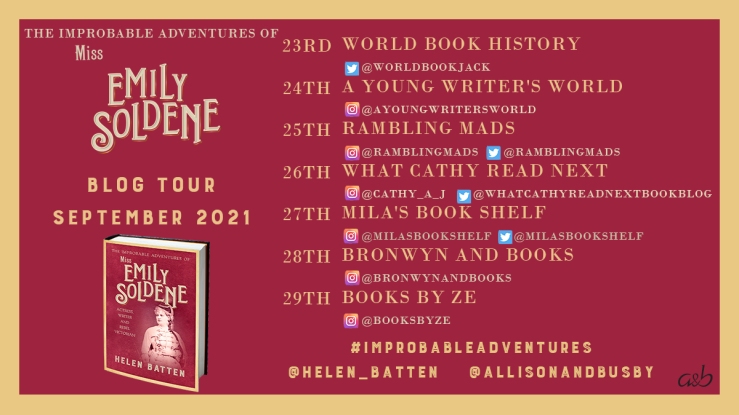 Welcome to today’s stop on the blog tour for The Improbable Adventures of Miss Emily Soldene: Actress, Writer, and Rebel Victorian by Helen Batten. My thanks to Helen at Helen Richardson PR for inviting me to take part in the tour and to Allison & Busby for my review copy. Do be sure to check out the reviews by the other book bloggers taking part in the tour. 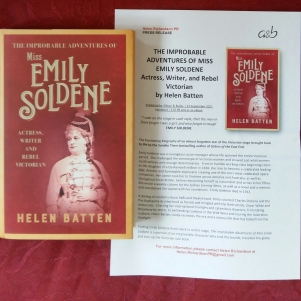 ‘I rode on the stage in such style, that the men in front forgot I was a girl, and also forgot to laugh.’

From humble beginnings as the daughter of a Clerkenwell milliner, Emily Soldene rose to become a leading lady of the London stage and a formidable impresario with her own opera company. The darling of London’s theatreland, she later reinvented herself as a journalist and writer who scandalised the capital with her backstage revelations.

Weaving through the spurious glamour of Victorian music halls and theatres, taking encounters with the Pre-Raphaelites and legal disputes involving Charles Dickens in her stride, Emily became the toast of New York and ventured far off the beaten track to tour in Australia and New Zealand. In The Improbable Adventures of Miss Emily Soldene, a life filled with performance, travel and incident returns to centre stage.

Helen Batten’s fascinating book explores Emily’s eventful journey from country girl, to music hall artiste, to doyenne of opera bouffe, to theatrical producer, novelist and journalist.  She also brings out of the shadows Emily’s family – her husband, children, nephews and nieces – who are curiously absent from not only Emily’s memoirs but also largely from her life and career. The exception is the relationship between Emily and her sister, Clara, the dynamics of which the author explores in some detail.

Helen Batten admits in her introduction that there are gaps in Emily’s memoirs – and sometimes downright untruths – which she has filled either with information from other sources or with speculation. The latter is always well-argued and insightful. By the way, in the introduction Helen explains her own very particular connection to Emily Soldene.

Alongside Emily’s story, the author includes fascinating nuggets of social history whether that’s contemporary attitudes to marriage and parenting roles, the Victorian male’s predeliction for saucy postcards, the prevalence of the casting couch in Victorian theatre, or the beginnings of the cult of celebrity journalism. Clearly the product of extensive research, this historical detail is delivered in an accessible way that never feels heavy-handed. Helen Batten also takes the opportunity to bring other female theatrical entrepreneurs out of the shadows, such as Charlotte Cushman, a singer and actress who became the first female theatre manager in the United States.

The author makes judicious use of excerpts from Emily’s memoirs and her newspaper columns. These really allow Emily to come alive, showcasing her keen observational skills and wicked sense of humour. One example is her less than complimentary observations about New York ladies of 1874: ‘They wore diamonds at the breakfast table, and cut through the vast space of the hotel dining-room with elevated, thin, nasal, metallic voices that made one’s skin creep.’ Being thin is something Emily herself could never be accused of.  Many years later attending the Motor Show at Olympia Emily imagines the conversation in the salon set aside for members of the Ladies’ Automobile Club: ‘Tea and transmissions, coffee and clutches, macaroons and magnetos, discussed with ardour and zest’.   As the author rightly observes of Emily’s journalism, ‘Her joie de vivre bubbles up in her prose like the literary equivalent of Offenbach’s champagne bounce’.

There is a great cast of secondary characters with walk-on parts for, among others, Charles Dickens, Oscar Wilde (‘unconvential, not to say impertinent’ remarks Emily) and aristocratic figures such as Lord Dunraven, whom Emily describes admiringly as ‘Gay, bright, clever and full of life; and who after the opera would walk home with us, cut the cold beef, and open the oysters and stout with the unconvential facility of the man who has been everywhere…’  As it happens, oysters and stout feature prominently in Emily’s life.

During her life Emily was also witness to many historic events including the 1908 London Olympics, the Sidney Street siege, the opening of the Central Line of the London Underground, and even the invention of the mobile phone. Yes, really… okay, an early version of it.  About the latter Emily wonders with uncanny prescience whether it will prove ‘a beneficent boon or a holy terror’.

As well as being a fascinating, impeccably researched and hugely entertaining read, the book contains some wonderful photographs of Emily, members of her family and of locations mentioned in the book. I absolutely loved following Emily’s ‘improbable adventures’ as she criss-crosses the globe. The book is a picture of a woman who lived life at full tilt and on her own terms; an example of girl power in the Victorian age, if you like.

In her introduction to the book, Helen Batten observes that Emily’s memoirs don’t tell the whole story. She writes, ‘I think she left some of the best bits out. So I’ve put them back in’. Helen, you absolutely did.

Helen Batten is the Sunday Times bestselling author of Sisters of the East End, and of The Scarlet Sisters which told the story of her grandmother’s life. She is also the co-author of Confessions of a Showman: My Life in the Circus, Gerry Cottle’s autobiography.

After reading history at Cambridge, Helen studied journalism at Cardiff University. She went on to become a producer and director at the BBC. She now works as a writer and psychotherapist. She lives in West London with her three daughters. 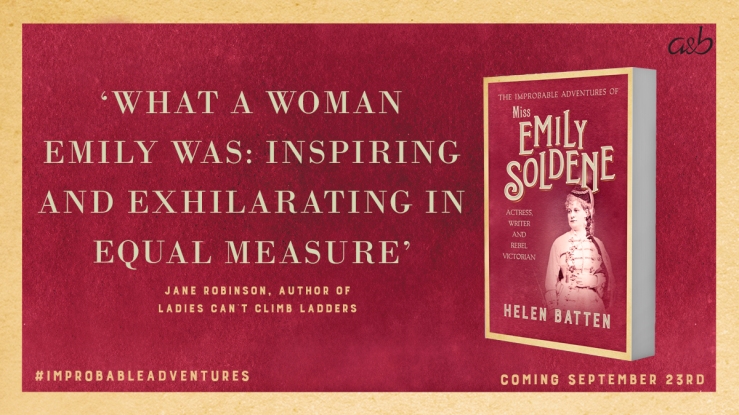