Welcome to today’s stop on the blog tour for The Garden of Angels by David Hewson. My thanks to Rachel at Rachel’s Random Resources for inviting me to take part in the tour and to Severn House for my digital review copy via NetGalley. The Garden of Angels is available now in hardback, ebook and as an audio book. Do also check out the posts by my tour buddies for today, Amanda at Ginger Book Geek and Els at B For BookReview.

The Palazzo Colombina is home to the Uccello family: three generations of men, trapped together in the dusty palace on Venice’s Grand Canal. Awkward fifteen-year-old Nico. His distant, business-focused father. And his beloved grandfather, Paolo. Paolo is dying. But before he passes, he has secrets he’s waited his whole life to share.

​When a Jewish classmate is attacked by bullies, Nico just watches – earning him a week’s suspension and a typed, yellowing manuscript from his frail Nonno Paolo. A history lesson, his grandfather says. A secret he must keep from his father. A tale of blood and madness . . .

​Nico is transported back to the Venice of 1943, an occupied city seething under its Nazi overlords, and to the defining moment of his grandfather’s life: when Paolo’s support for a murdered Jewish woman brings him into the sights of the city’s underground resistance. Hooked and unsettled, Nico can’t stop reading – but he soon wonders if he ever knew his beloved grandfather at all.

Find The Garden of Angels on Goodreads

I was drawn to this book partly by its subject matter but also by its setting. I’ve been lucky enough to visit Venice on a couple of occasions, although I can’t claim the intimate knowledge of the city the author clearly possesses. I’ll admit that, because of its unique location, it hadn’t occurred to me that Venice would have been occupied by the Nazis during the Second World War. Therefore, this was an aspect of the novel I found especially intriguing.

The story of the wartime experiences of Nico’s grandfather, Paolo Uccello, and his fellow Venetians is revealed in instalments to Nico, by way of a series of letters. A little confusingly Paolo’s recollections are related in the third person, as if he was an observer rather than a participant, and include scenes and conversations to which he was not a party. Leaving that aside, the story Paolo tells is one of fear, betrayal, collaboration and wartime atrocities but also of courage.

As Nico learns more about Paolo’s experiences, he wanders the streets of Venice visiting – and photographing – some of the locations mentioned by his grandfather, such as the building that housed the SS headquarters and the site of the Jewish ghetto. He is struck by the seeming unawareness of present day visitors to the terrible events that took place in those same places fifty years before.  Seeing a group of children playing football at one site, he has to stop himself shouting ‘Don’t you know what happened here? Can’t you feel the traces of all that memory?’.  As it happens, the Venetians who lived through that time, including the family’s housekeeper, seem equally unwilling to talk about what went on during the occupation. Nico’s wanderings through the city give him a growing sense of past and present eliding. ‘More and more I felt I was walking through two cities at the same time.  The Venice I’d grown up in.  The different, darker, violent city that Nonno Paolo had known when he wasn’t much older than me.’

I liked the way his grandfather’s story makes Nico reflect on how war can make people behave.  ‘That was one of the lessons he was trying to teach me: evil wasn’t special. There was no need for extraordinary villains with scars, and wicked, dark glints in their eyes.  It was ordinary, mundane, a part of the city, a lurking virus within us all.’  A good example in the book of the ‘ordinary monsters’ is the character Luca Alberti, a Venetian policeman who finds himself collaborating with the Nazis. There are plenty of other memorable characters too such as Catholic priest, Filippo Garzone, and Aldo Diamante, appointed by the Nazis as leader of the Jewish community in Venice, who becomes faced with an impossible dilemma.

The book displays the author’s impressive knowledge of Venice, especially the ‘off-the-beaten track’ areas rarely visited by tourists.  I loved the imaginative ways Venice, ‘the city on the water’, was described, including as ‘a precious gilded prison’ and ‘the louche old lady of the lagoon’.  Not only did I learn a lot about the history of Venice and Italian politics of the period but also about the process of weaving a kind of velvet known as soprarizzo using a Jacquard loom. You can find out more about the latter here.

The Garden of Angels is both an intriguing wartime story and a great advertisement for the wonderful city of Venice.  It’s a trip to put on your bucket list.  In the meantime, why not visit in literary form by adding The Garden of Angels to your TBR pile.

Try something similar: The Diplomat’s Wife by Michael Ridpath 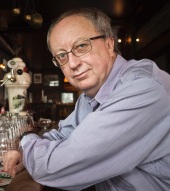 David Hewson is a former journalist with The Times, The Sunday Times and the Independent. He is the author of more than twenty-five novels, including his Rome-based Nic Costa series which has been published in fifteen languages, and his Amsterdam-based series featuring detective Pieter Vos. He has also written three acclaimed adaptations of the Danish TV series, The Killing. He lives near Canterbury in Kent.