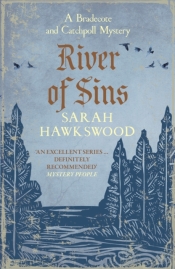 July, 1144. The body of a woman is found butchered on an island a few miles upriver from Worcester – how did she get there, who killed her, and why?

Uncovering the details of Ricolde’s life and her past reveal a woman with hidden depths and hidden miseries which are fundamental to the answers, but time has cast a thick veil over the killer’s identity. The lord sheriff’s men have a trail that went cold over two decades ago, and evidence that contradicts itself.

Undersheriff Bradecote and Serjeant Catchpoll will need all their wits to solve this mystery.

Find River of Sins (Bradecote and Catchpoll Mystery #7) on Goodreads

As a huge fan of historical crime mysteries, I’m surprised it’s taken me so long to discover Sarah Hawkswood’s ‘Bradcote and Catchpoll’ series set in medieval Worcester. However, better late than never!  It also allows me to reassure readers that, despite being the seventh in the series, River of Sins can definitely be enjoyed without having read any of the previous books. There are a few references to earlier events and to the back stories of the leading characters, including some personal tragedies and longstanding enmities, but this in no way spoiled the book for me.

Hugh Bradcote, Undersheriff of Worcestershire and Serjeant Catchpoll make a great team. I get the impression that initial reservations they may have had about working together have been replaced by mutual respect and trust. Catchpoll has the street level knowledge of their patch, the keen eye of a detective and a reputation for taking no nonsense. Bradecote, on the other hand, may not have the detective nous of his sergeant but he has a keen sense of justice and can command the respect his status brings. In fact, they often deploy not so much a ‘good cop, bad cop’ strategy as a ‘toff cop, common cop’ approach with advantageous results. Walkelin, Catchpoll’s apprentice, brings youthful energy and some keen observational skills to the mix.

River of Sins has all the features of a police procedural but transported to medieval Worcester: securing the crime scene, gathering physical evidence, interviewing witnesses and identifying possible suspects.  There are plenty of the latter but the one thing missing, especially as events take an unexpected turn, is motive.  As Catchpoll observes to Bradcote, “There is no ‘why’, my lord, and that worries me. Until we have the ‘why’, I do not see my way clear to the ‘who'”.

As the investigation progresses, secrets from the past and hidden agenda are revealed along with tantalizing clues and false trails all enveloped in the atmosphere of medieval Worcester.  The author keeps the tension building with some dramatic scenes as Bradcote and Catchpoll close in on the culprit.

I really enjoyed River of Sins.  It’s a skillfully crafted mystery with plenty of period detail and two likeable leading characters. The good news is not only have I found a new historical crime series to follow but I have the six previous books to catch up on while I await the next investigation for Bradecote and Catchpoll, promised for 2021.

I received a review copy courtesy of Allison & Busby via NetGalley.

Try something similar: The Monastery Murders by E. M. Powell

Sarah Hawkswood describes herself as a ‘wordsmith’ who is only really happy when writing. She read Modern History at Oxford and first published a non-fiction book on the Royal Marines in the First World War before moving on to medieval mysteries set in Worcestershire.