Welcome to today’s stop on the blog tour for When We Fall by Carolyn Kirby which was published on 7th May 2020 to coincide with the 75th anniversary of VE Day. My thanks to Anne at Random Things Tours for inviting me to participate in the tour and to No Exit Press for my advance review copy with its ingenious accompanying material. 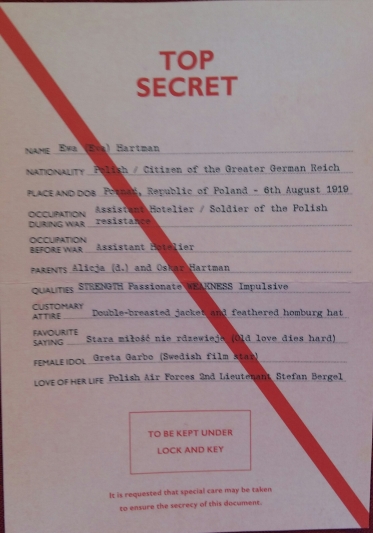 You can listen to Carolyn talking to Barry Forshaw about When We Fall and answering reader questions at her virtual book launch on 7th May here (opens in new window/tab). Carolyn has also recorded a video about the true story behind the novel and the only female victim of the massacre – Polish pilot Janina Lewandowska – on whom one of the characters in When We Fall is based.

England, 1943. Lost in fog, Air Transport Auxiliary pilot Vee Katchatourian is forced to make an emergency landing where she meets enigmatic RAF airman Stefan Bergel, and then can’t get him out of her mind.

In occupied Poland, Ewa Hartman hosts German officers in her father’s guest house, while secretly gathering intelligence for the Polish resistance. Mourning her lover, Stefan, who was captured by the Soviets at the start of the war, Ewa is shocked to see him on the street one day.

Haunted by a terrible choice he made in captivity, Stefan asks Vee and Ewa to help him expose one of the darkest secrets of the war. But it is not clear where everyone’s loyalties lie until they are tested.

Published to coincide with the 75th anniversary of VE Day and based on the Katyn Massacre of 1940, When We Fall is a moving story of three lives forever altered by one fatal choice.

Find When We Fall on Goodreads

I really enjoyed Carolyn Kirby’s debut novel, The Conviction of Cora Burns, describing it in my review as “an intensely satisfying read that I can wholeheartedly recommend to readers who like their historical fiction to have real depth”. I’m happy to say those comments equally apply to When We Fall.

When We Fall combines the gradual unfolding of a complex web of relationships with moments of intense darkness and high drama, all set against the backdrop of World War II. I also loved that the book explores other themes, such as questions of identity and the symbolism of how we name things.

For example, Ewa, has German heritage but considers Poland her homeland. Poland’s history is one of occupation and re-occupation by other countries and in 1943, the occupying power is Nazi Germany. They have outlawed the Polish language and are engaged in changing the names of people and places to their German versions. For instance, Poznan to Posen. So Ewa must discipline herself to respond to the name Eva and to suppress her natural inclination to speak Polish. A lapse in the latter could be viewed as a ‘symptom of questionable national loyalty’ and bring unwelcome attention from the authorities on herself, and her father. Leading essentially a double life – as Eva, the attentive, German speaking guest house waitress and Ewa, the Polish speaking Resistance operative – she observes of her two identities that “each one speaks and acts like a different person”. She even dresses to match her role on occasions.

Incidentally, I thought it a clever touch to have the other main female character choose to be known as Vee, although her name is actually Valerie, and have her surname of Katchatourian suggest she is foreign when she was in fact born in England. Interestingly, Vee’s heritage is Armenian, a country that through the centuries was under the sway of both the Russian and Ottoman empires. Sadly, it was also the location of a massacre, now designated a genocide, during and after the First World War.

Talking of Vee, I really enjoyed the scenes in which she takes to the skies. As a reader, you get a sense of the exhilaration of flying in a small aircraft, something I’ve never done and, frankly, am unlikely ever to do.  For example, this description of Vee’s first time flying the iconic Spitfire: ‘Never has an aeroplane felt more at home in its element. Higher, higher. The Spitfire is cushioned by the air. Falling is inconceivable.’ I was brought down to earth (apologies for the pun) by learning that, being a single seater plane, at some point every Spitfire pilot had to get in what was then ‘the fastest machine on earth’ and fly it, for the first time, alone.

In Stefan Bergel, and in the other man who comes to play a pivotal role in Ewa’s life, the author has created two complex characters who possess both attractive and decidedly unattractive sides. I confess I found it difficult to understand Ewa’s devotion to Stefan, even leaving aside what the reader knows but Ewa doesn’t. He shows little awareness of the impact his long, unexplained absence has had on her and, when they are reunited, seems more interested in resuming the physical side of their relationship than anything else. And the other man? On first sight, he appears more of a catch. However, as one character remarks, “It may not be clear where everyone’s loyalties really lie until they are tested”. Or, what form that test will take.

There are many clever touches I could mention such as the atmospheric section titles. [Ed: That’s enough of the puns now.] In addition, the book’s title lends itself to a variety of interpretations: falling in the literal sense, either by accident or design; in a philosophical sense, as when we fail to meet our own or other’s expectations; or in a moral sense when we give in to temptation.

In the final chapters, the revelations come thick and fast; some of these took my breath away. In a sense, When We Fall completes the mission its characters struggle so hard to achieve. The book is a great example of why I love historical fiction. It transported me to a different time and place, drew me into the lives of its characters and taught me things I didn’t know. When We Fall is a wonderful mix of historical fact and fiction, fuelled by a gripping story. Like Vee’s Spitfire, it soars joyfully.

Try something similar: People Like Us by Louise Fein or The Secrets We Kept by Lara Prescott

Carolyn Kirby is the author of The Conviction of Cora Burns which was longlisted for the Historical Writers’ Association Debut Crown Award.  Before becoming a full-time writer, Carolyn worked in social housing and as a teacher. She has two grown-up daughters and lives with her husband in Oxfordshire.