If you’ve ever wondered about how authors go about creating characters, then Julie’s guest post entitled ‘Creating, moulding and watching your characters grow’ will tell you everything you need to know.

Check out the tour poster at the bottom of this post to see the other fabulous book bloggers taking part in the tour who will be posting reviews and extracts from Coming Home to Holly Close Farm as well as interviews with Julie and other guest posts.

Charlie Maddison loves being an architect in London, but when she finds out her boyfriend, Dominic is actually married, she runs back to the beautiful countryside of Westenbury and her parents. Charlie’s sister Daisy, a landscape gardener, is also back home in desperate need of company and some fun.

Their great-grandmother, Madge – now in her early nineties – reveals she has a house, Holly Close Farm, mysteriously abandoned over sixty years ago, and persuades the girls to project manage its renovation.

As work gets underway, the sisters start uncovering their family’s history, and the dark secrets that are hidden at the Farm. A heart-breaking tale of wartime romance, jealousy and betrayal slowly emerges, but with a moral at its end: true love can withstand any obstacle, and, before long, Charlie dares to believe in love again too…

For me, one of the best things about being a writer has to be that I have free reign to create characters completely at will. I would probably argue that all my novels are very much character-driven and the great thing is, I can name these people how I want – within reason, of course: how many times, as a teacher, have I persuaded ten-year-olds not to call their Tudor kitchen-maids Kylie, Chelsea or Tracy? – and have my characters say and do things I probably wouldn’t say or do myself. It really is quite liberating.

I always become very attached to my characters and find it quite hard to let them go. I remember, as a little girl, reading all the Enid Blyton stuff and being delighted when the boy in her Circus stories made a cameo appearance in one of the Naughtiest Girl at School books. There’s something comforting about the reappearance of a character we know and love: Jilly Cooper certainly recognised this when she regularly brought Rupert Campbell-Black back into her fabulous Rutshire Chronical novels. Similarly, Harriet, Grace and Mandy, the main characters in Goodness, Grace and Me and The One Saving Grace have managed to make cameo roles in all my subsequent books. It would appear I have no control over them whatsoever!

While I think, in the main, a writer has to really like her characters, that might not be the case right from the start of the story. We might create someone who isn’t really our favourite, someone we wouldn’t particularly want to spend time with and with whom we may not totally empathise at the beginning. But a good writer should enable a flawed character to grow and develop so that not only does the reader come round to liking her, but is actively gunning for her by the final chapters. In An Off-Piste Christmas I created Vienna who really was quite wonderfully dreadful, but I had great fun with her dialogue and I actually grew quite fond of her by the end of the story.

It was very different with Charlie Madison in Coming Home to Holly Close Farm. I liked her from the start, but she did need to grow and develop and learn something, and by the final chapters I found I really loved her.  Although it’s been pointed out to me that Charlie can’t have been very nice, that she was living with a married man and she should have known better, in Charlie’s defence, I will repeat, she had no idea he was married. She’d been taken in, duped, totally made a fool of. The way that she coped with this bombshell and in having to trail back home North to her parents was by putting barriers up, being a crosspatch and appearing arrogant and full of herself.  Even Daisy, her sister, takes her to task when Charlie comes over as arrogant and condescending.

‘What is your problem?’ Daisy was cross. ‘Those two are lovely, and you came over as an arrogant, supercilious know-it-all. You’ve been offered this wonderful opportunity to develop the most heavenly house I’ve ever seen,’ Daisy stomped towards reception and I had to hurry to keep up, ‘and yet you were bad tempered, miserable, inflated with your own importance.’

‘Oh, how about condescending, distant, patronizing…?’

We see Charlie beginning to grow and develop as a character.

‘I was feeling guilty. Recognised what a total pillock I’d been. As we walked in stony silence along the corridor towards Granny Madge’s room, I tried to work out why I’d been so awful.

‘I was jealous,’ I muttered to Daisy’s back.

By the end of the novel, particularly having learned much about real love, real unselfish love, from her great-grandmother, Madge, Charlie has, I do hope, really grown and developed as a character. As such, I’m not sure we can, or should be, asking a great deal more from the characters we create.

And, I shall, one day I’m sure, give her the biggest compliment of all: resurrecting her character by giving her a place and a part in a future novel!      © Julie Houston, 2019

Julie Houston is the author of The One Saving Grace, Goodness, Grace and Me and Looking for Lucy, a Kindle top 100 general bestseller and a Kindle #1 bestseller.

She is married, with two teenage children and a mad cockerpoo and, like her heroine, lives in a West Yorkshire village. She is also a teacher and a magistrate. 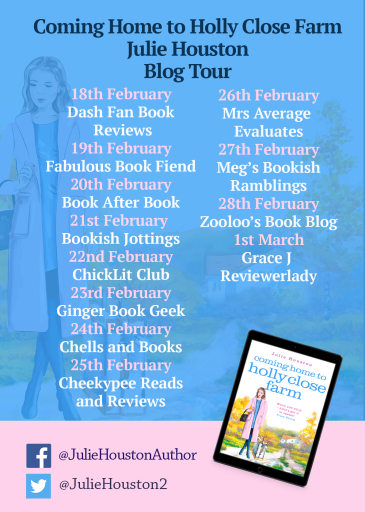