Mr. Standfast is the third book in my John Buchan reading project, Buchan of the Month.  To find out more about the project and my reading list for 2018, click here.  You can also find links to my reviews of the two previous books, The Power-House and John Macnab.  If you would like to read along with me you will be very welcome – leave a comment on this post or on my original challenge post.

What follows is an introduction to the book (no spoilers!).  It is also an excuse to show off a picture of my lovely little Nelson edition of Mr. Standfast, complete with dust jacket. I will be posting my review of the book later in the month.

Like Buchan’s earlier adventure stories, Mr Standfast first appeared in instalment form.  However, it was never serialized in the UK, instead appearing in four parts between January and February 1919 in  The Popular Magazine, an early American all-fiction magazine (also referred to as a ‘pulp’) published by Street & Smith.

It was published in novel form by Hodder & Stoughton in June 1919.  Interestingly, by this stage in his writing career, Buchan was able to negotiate very lucrative royalty deals for his books.  His biographer, Janet Adam-Smith, reports that for Mr Standfast he agreed 25% for the first 5,000 sales, 30% up to 15,000 sales and 33⅓% thereafter. The book sold 19,000 copies in its first year after publication and had combined sales of 231,000 by 1960.

Mr Standfast is the third outing for Richard Hannay (after The Thirty-Nine Steps and Greenmantle).   Its title refers to one of the characters in John Bunyan’s The Pilgrim’s Progress, a very influential text for Buchan throughout his life. In his autobiography, Memory-Hold-The-Door (published as Pilgrim’s Way in the United States), Buchan describes The Pilgrim’s Progress as ‘his constant companion’ in childhood noting, ‘Even today I think that, if the text were lost, I could restore most of it from memory’.  Certainly, Mr Standfast contains many intertextual links to Bunyan’s work, both direct references and allusions.

The novel transports the reader from London, to the Home Counties, to Glasgow, to the Highlands and Islands and to Switzerland before its climax on the Western Front in France in 1918. Many of the compelling battlefield scenes in the novel benefit from information gleaned from Buchan’s role as Director of the Department of Information and Director of Intelligence in the Ministry of Information between 1917 and 1918.  However, the novel also engages with the pacifist movement that was active in parts of Britain during the First World War and with conscientious objection.  It also features an important role for a female character.  As in The Power-House and The Thirty-Nine Steps, our hero’s adversary takes the form of an individual with a massive intellect but very few scruples and a gift for passing themselves off as something they’re not.

David Daniell, author of The Interpreter’s House: A Critical Assessment of the Works of John Buchan (another The Pilgrim’s Progress reference!), describes Mr Standfast as ‘possibly the best thing [Buchan] wrote’.  I’ll not demur.  Whilst not wanting to pre-empt my review, I’ll confess now that Mr Standfast is one of my favourite Buchan novels.  If you decide to read it, I do hope you enjoy it.

David Daniell, The Interpreter’s House: A Critical Assessment of the Work of John Buchan (Nelson, 1975) 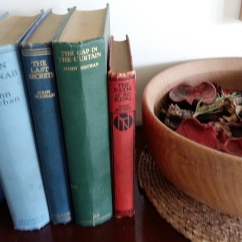 One thought on “Buchan of the Month: Introducing…Mr. Standfast”