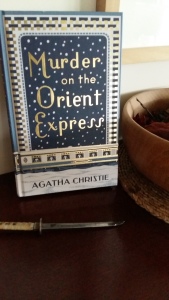 Just after midnight, the famous Orient Express is stopped in its tracks by a snowdrift. By morning, the millionaire Samuel Edward Ratchett lies dead in his compartment, stabbed a dozen times, his door locked from the inside.

Without a shred of doubt, one of his fellow passengers is the murderer.

Isolated by the storm, detective Hercule Poirot must find the killer among a dozen of the dead man’s enemies, before the murderer decides to strike again.

Purchase Links*
Amazon.co.uk
*links provided for convenience, not as part of any affiliate programme

Find Murder on the Orient Express on Goodreads

I know the 1974 film version of Murder on the Orient Express, starring the wonderful Albert Finney as Hercule Poirot, very well. It has a fantastically star-studded cast and the most gorgeous theme music, composed by Richard Rodney Bennett. I can’t in fact recall whether I’ve read the book before, although I suppose I must have done many years ago. So I was really intrigued to see how – if it did – the original book differed from the film version. I was pleasantly surprised to find that the film version I know follows the book very closely, including much of the dialogue with only a few changes to the names of characters and minor plot deviations.

Although many of Agatha Christie’s books could vie for the title of ‘cleverest’, I think Murder on the Orient Express must be a strong candidate for that accolade (along with perhaps The Murder of Roger Ackroyd). Along with a superb plot, numerous red herrings and myriad possible suspects, Murder on the Orient Express features Hercule Poirot exercising all his powers of deduction – no access to forensics, criminal records or outside assistance, just the exercise of the ‘little grey cells’. You might say, detection in its purest form. As he says himself:

“We are cut off from all the normal routes of procedure. Are these people whose evidence we have taken speaking the truth or lying? We have no means of finding out – except such means as we can devise ourselves. It is an exercise, this, of the brain.”

Added to this you have the glamour of the Orient Express itself and the evocation of an age of luxurious travel very different from that we experience today (unless we’re very rich or very lucky).  And the solution to the mystery of who killed Ratchett? As Doctor Constantine remarks: “This…is more wildly improbable than any roman policier I have ever read.” Maybe. But it’s a riveting read nonetheless and still exceptionally clever, even if the ending of the book is a little rapid.

Murder on the Orient Express forms part of my From Page to Screen reading challenge. I’ll be publishing a comparison of the book and the latest film version starring Kenneth Branagh in a few weeks time. Thank you to my husband for this beautiful special edition published to coincide with the release of the film.

Try something similar…Death on the Nile by Agatha Christie

Born in Torquay in 1890, Agatha Christie became, and remains, the best-selling novelist of all time. She is best known for her 66 detective novels and 14 short story collections, as well as the world’s longest-running play – The Mousetrap. Her books have sold over a billion copies in the English language and a billion in translation.

2 thoughts on “Book Review: Murder on the Orient Express by Agatha Christie”