I love my historical fiction and one of my favourite periods is Ancient Rome, so I’m delighted to be hosting today’s stop on the blog tour for Twilight Empress by Faith L Justice, a book that ticks both those boxes. It’s subject is Placidia, sister to one of the last Roman Emperors, who became a powerful force in her own right. 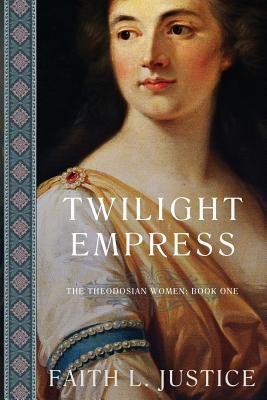 Twilight Empress tells the little-known story of a remarkable woman – Galla Placidia, sister to one of the last Roman Emperors.

Roman princess, Gothic captive and queen – Placidia does the unthinkable – she rules the failing Western Roman Empire – a life of ambition, power and intrigue she doesn’t seek, but can’t refuse. Her actions shape the face of Western Europe for centuries. A woman as well as an Empress, Placidia suffers love, loss, and betrayal. Can her strength, tenacity and ambition help her survive and triumph over scheming generals, rebellious children, and Attila the Hun? Or will the Dark Ages creep closer and bring down the Empire?

Twilight Empress is the first book in Faith L Justice’s Theodosian Women series. Future books will focus on Pulcheria, sister of Emperor Theodosius, and Athenais, his wife. On the strength of Twilight Empress, I shall certainly look out for the subsequent books.

Full disclosure – I was about a fifth of the way through Twilight Empress when I started to get the feeling the story was familiar. I finally remembered that I read another book about Placidia (Nobilissima by Carrie Bedford) a few years ago. All credit to this author’s skill that I didn’t feel the story I was reading was rehashing old ground. In fact, what I really liked was the way the author breathed life and personality into the characters around the bare bones of the known historical facts.

The story opens with the sacking of Rome and capture of Placidia, sister of the Western Roman Emperor Honorius, by King Alaric of the Goths. Alaric hopes to use Placidia as a bargaining chip to persuade Honorius to grant the Goths land and food in return for peace. This method of negotiation will become very familiar as the book progresses since this is a story characterised by intrigue, betrayal, political manoeuvring, treachery and murder. But it is also a convincingly told human story of love and loss set against larger political events.

The message that emerges is a universal and seemingly eternal one: that the source of most conflict is a desire for security, for enough food and a place to call home and in which to raise a family. As if we needed reminding, it also recalls that when the powerful plot and scheme, it is the ordinary people that suffer.

In Placidia, the author gives us a convincing picture of a strong, capable woman with as much courage, guile and intellect as any of her male contemporaries but with the misfortune to be born a woman in an age when – even as a member of the Imperial family – that consigned her to the role of wife and mother.  Although not conventionally beautiful (for the times), it seems these characteristics, and her innate contradictions, made Placidia particularly attractive to men because she inspired lifelong devotion in many of them.

This remarkable woman outlived two husbands, survived capture and imprisonment, navigated her way through political intrigue and frequent plots against her, dying eventually of old age but not before she had seen off plenty of enemies, either by outwitting them or by more violent means:  ‘You forgot I am a princess, raised in the Imperial court. Treachery and betrayal were my tutors and playfellows. Revenge is not only a Gothic custom.’

I really enjoyed reading her story in Twilight Empress.

I received a review copy courtesy of the author and HF Virtual Book Tours in return for an honest and unbiased review.

Try something similar…I Am Livia by Phyllis T Smith

Faith L. Justice is a science geek and history junkie, which is reflected in her writing. Her short stories and poems have appeared in such publications as “The Copperfield Review”, “Beyond Science Fiction and Fantasy”, and the “Circles in the Hair” anthology. Faith has published in such venues as “Salon.com”, “Writer’s Digest”, “The Writer”, and “Bygone Days”. She’s an Associate Editor for “Space & Time Magazine”, a frequent contributor to “Strange Horizons”, and co-founded a writer’s workshop more years ago than she cares to admit.