Welcome to today’s stop on the blog tour for Beyond This Broken Sky by Siobhan Curham. My thanks to Sarah Hardy for inviting me to take part in the tour and to Bookouture for my digital review copy via NetGalley. 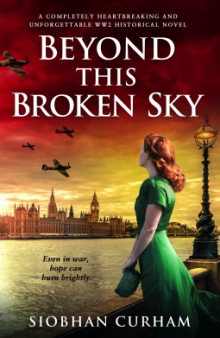 1940, London. As a volunteer for the ambulance service, Ruby has the dangerous task of driving along pitch-dark roads during the blackout. With each survivor she pulls from the rubble, she is helping to fight back against the enemy bombers, who leave nothing but destruction in their wake. Assigned to her crew is Joseph, who is unable to fight but will stop at nothing to save innocent lives. Because he is not in uniform, people treat him with suspicion and Ruby becomes determined to protect this brave, compassionate man who has rescued so many, and captured her heart. Even if it means making an unthinkable choice between saving her own life and risking everything for his…

2019, London. Recently divorced Edi feels lost and alone when she moves to London to start a new life. Until she makes a discovery, hidden beneath a loose floorboard in her attic, that reveals a secret about the people who lived there in the 1940s. As she gradually uncovers a wartime love story full of danger and betrayal, Edi becomes inspired by the heroism of one incredible woman and the legacy that can be left behind by a single act of courage…

Find Beyond This Broken Sky on Goodreads

Beyond This Broken Sky alternates between two timelines – London in 1940 and 2019 – and is narrated from three points of view.

Set at the height of the Blitz on London in September 1940, the wartime storyline is shared between Ruby Glenville, owner of a large house converted into flats, and one of her tenants, Joseph O’Toole.

Ruby and Joseph’s initial reaction is one of mutual dislike, emulating the formula used so successfully by Jane Austen in Pride and Prejudice. While acknowledging her beauty, Joseph disapproves of what he sees as Ruby’s privileged life and the séances she holds, believing her guilty of deceiving those who take part. Meanwhile, Ruby, whilst noting his resemblance to Clark Gable, finds it difficult to overcome her distaste for Joseph’s pacifism, especially because of the impact on her deceased father of his experiences in the First World War.

I have to say I had some sympathy with Joseph’s view to begin with. From the evidence, Ruby’s séances are theatrical enterprises utilising the ventriloquism skills learned from her grandfather and the performance techniques passed on to her by her actor father. Her attempts to convince herself that her motivation is merely a desire to bring comfort to others doesn’t really stand up to scrutiny. Add to that her willingness to endure dinner with a man she describes as ‘an insufferable bore’ simply because it involves a trip to the Savoy Grill, and treating the news of the bombing of Burlington Arcade as a ‘personal affront’ because of the many afternoons she had spent there  purchasing a new silk scarf or perfume.

I began to warm a little more to Ruby as her protective instincts towards her friend and tenant, the ‘timid as a mouse’ Kitty, became evident and I shared Ruby’s view of Kitty’s husband as a particularly horrid specimen of manhood. Her efforts to inject a little happiness into Kitty’s life were laudable if, as it transpires, misguided. And I had to acknowledge Ruby’s bravery when she volunteers to become a member of an ambulance crew, a particularly dangerous occupation driving through the dark, bomb-damaged, streets of London. Eventually, both Ruby and Joseph are forced to question their previous beliefs.

In the modern day storyline, Edi recently divorced from husband Marty, is now living in the top floor apartment of a house in an exclusive square. Narrated in the first person, this storyline was enlivened for me by Edi’s friendship with Pearl, her downstairs neighbour. The formidable and rather eccentric Pearl is the owner of an extensive library and also an author, most recently of mysteries but previously of a book set in wartime London. When Edi acquires a copy of the  latter the two storylines begin to merge. So much so that it becomes a touch metafictional as Edi reads in Pearl’s book the thoughts of its female protagonist that she had ‘lived her entire adult life as if she were the heroine in a story of her own creation.’

I confess the wartime storyline held the most interest for me, with the modern day story feeling as if it was merely a framing device. Like Edi as she reaches the final chapters of Pearl’s book, I found myself keen to get back to the wartime story and find out how it ends.  I thought the author did a great job of conveying the atmosphere of London during the Blitz, such as this dramatic description of what Ruby and Joseph experience one night whilst out on call in the ambulance. ‘The sky up ahead of them was now ablaze with searchlights, tracer bullets and parachute flares and, every so often, the blinding flash of white light as a bomb exploded.  It was like a surreal storm in a surreal nightmare that just wouldn’t end.’

The romance element of the book was touching and no doubt representative of many a snatched wartime relationship. I also liked the way the author took the opportunity to point out the differences between the experiences of the privileged and those less fortunate during the Blitz, such as the lack of provision of proper underground shelters in the poorer parts of London.  And I certainly wasn’t aware The Savoy had its own rather sumptuously fitted out shelter for the use of hotel guests or that, initially, people were forbidden from taking shelter in Underground stations during air raids.

Beyond This Broken Sky will appeal to fans of dual time stories that combine a wealth of period detail, an element of mystery, a touch of melodrama and a generous helping of romance.

I received an advance review copy courtesy of Bookouture via NetGalley.

Try something similar: The Night Train to Berlin by Melanie Hudson

Siobhan Curham is an award-winning author, ghost writer, editor and writing coach. She has also written for many newspapers, magazines and websites, including The Guardian, Breathe magazine, Cosmopolitan, Writers’ Forum, DatingAdvice.com, and Spirit & Destiny.

Siobhan has been a guest on various radio and TV shows, including Woman’s Hour, BBC News, GMTV and BBC Breakfast. And she has spoken at businesses, schools, universities and literary festivals around the world, including the BBC, Hay Festival, Cheltenham Festival, Bath Festival, Ilkley Festival, London Book Fair and Sharjah Reading Festival.

Welcome to today’s stop on the blog tour for The Spanish Girl by Jules Hayes. My thanks to Rachel at Rachel’s Random Resources for inviting me to take part in the tour and to Orion Dash for my digital review copy via NetGalley.

A country torn apart by war. Two love stories divided by decades. One chance to discover the truth…

Feisty journalist Isabella has never known the truth about her family. Escaping from a dangerous assignment in the turbulent Basque country, she finds her world turned upside down, firstly by her irresistible attraction to the mysterious Rafael, and then by a new clue to her own past.

As she begins to unravel the tangled story of her identity, Isabella uncovers a story of passion, betrayal and loss that reaches back to the dark days of Spain’s civil war – when a passionate Spanish girl risked everything for her country, and for the young British rebel who captured her heart.

But can Isabella trust the man she’s fallen in love with? Or are some wartime secrets better left undisturbed…?

Find The Spanish Girl on Goodreads

Purchase links
Amazon UK
Links provided for convenience only, not as part of an affiliate programme

I very much enjoyed Jules Hayes’ previous book, The Walls We Build, so I was delighted to be offered the chance to read her latest novel, The Spanish Girl. If you’ve been following the blog tour, you’ll know it’s been getting enthusiastic reviews from readers.

The book opens in 1937 during the Spanish Civil War with a dramatic prologue in which a young boy witnesses a shocking event that will have consequences for decades to come.  It’s then fast forward to May 1976 and Franco’s Spain as journalist Isabella Adame travels to interview Rafael Daguerre, a prominent Basque separatist. Initially, Isabella finds Rafael rude, arrogant and obstinately self-assured but, as we learned from Jane Austen’s Pride and Prejudice, first impressions are not always accurate – or are they?

Isabella’s role as a campaigning journalist is seeking answers to questions and trying to discover the truth so it’s ironic that she’s living with so many unanswered questions about her own life, such as the mystery surrounding the disappearance of her birth mother, Sofia, and the identity of her father.  It’s resulted in Isabella becoming rather guarded, with few friends and a life which has become, in her own words, a ‘monotone mosaic’.  The only people who mean anything to her are Calida and Aurelio who adopted her when she was a baby, fleeing from Spain to France during the height of the Civil War.  For all these reasons, it’s not surprising that she is intrigued when Rafael reveals a link to her mother.  From that point on, the book alternates between Isabella’s search for the truth and events during the Spanish Civil War.

As the story unfolds, the reader is immersed in the complex politics and history of Spain both during the Civil War through the introduction of another storyline which will see a rivalry develop that will ultimately split a family, and later through events during the Franco regime.  Indeed, the author has her characters witness dramatic events such as the notorious bombing of the city of Guernica that left many dead and had a lasting impact on the people of Spain.  “The hostility that existed all over Spain, between families that had once lived peacefully together, and friends who couldn’t trust each other anymore.”

As a counterbalance to the horror, throughout the book the author uses opportunities to evoke the spirit of Spain – its  culture, food, landscape and music.  A scene that stood out for me was Isabella, inspired by traditional guitar playing, performing flamenco during which she feels ‘nothing existed only the thumping beat, the raw energy, the infinity of music’.

I can’t say much more about how the story unfolds for fear of spoilers, except that I’m not sure I could be as forgiving as Isabella is to some of the characters when the truth of what they knew – and when – is finally revealed.  Isabella’s story exposes the guilt that can linger for things done or not done, the burning desire for answers and the need to belong.

The Spanish Girl is an absorbing story of secrets and lies, love, loss and betrayal.

Try something similar: The Garden of Angels by David Hewson

Jules writes: “I have a degree in modern history and I’m fascinated with events from the first half of the 20th century, which is the time period my historical fiction is set. My work has been longlisted in the Mslexia Novel Competition, and shortlisted in the prestigious Bridport Short Story Competition. I live in Berkshire, UK with my partner, daughter and dog. Before writing stories, I was a physiotherapist.”

Jules Hayes is a pseudonym for J A Corrigan who writes contemporary thrillers. Falling Suns by J A Corrigan (Headline Accent) was published in 2016.