Annie, Francie and Archie were inseparable growing up, but in 1914 the boys are seduced by the drama of the Great War. Before leaving their small Irish village for the trenches, Francie promises his true love Annie that he will bring her little brother home safe.

Six years later Francie is on the run, a wanted man in the Irish war of Independence. He needs Annie’s help to escape safely across the border, but that means confronting the truth about why Archie never came back….

Find The Sunken Road on Goodreads

The story unfolds in alternating chapters moving between the trenches of France in 1915/16 and Ireland in 1922 during the Irish War of Independence. I’ll admit the latter is not something I knew much about prior to reading this book. What I learned can perhaps be summed up by one character’s observation, ‘The North, the South, the British, the Specials, the Free State Army, the IRA. It’s a right fuckin’ mess up here’.

The author has an actor’s ear for dialogue and the rhythm of Irish speech. The book’s vivid, punchy language accentuates the black humour of Frankie and his comrades. Apart from drink, it’s their only shield against the memories of the terrible scenes they have witnessed and the senseless loss of life. The madness of war is exemplified by a trench raid which is hailed a success despite it yielding no results apart from the death of a highly regarded officer, awarded a posthumous DSO. ‘For conspicuous gallantry, in action… There is nothing conspicuous about him now. Apart from his fucking absence.’

The Sunken Road is not a book for the faint-hearted as it includes harrowing scenes depicting the realities of trench warfare in France and Belgium during the First World War. ‘There is a uniformity to men’s voices when they choke on their own blood while begging for their mother’s tit. A million shells from thousands of guns for hundred of hours.’ It is during his time serving with the British army that Frankie first encounters the man who will become his nemesis – a man who is a bully, a coward and a hypocrite.

It is only in the final chapters of the book that Annie – and the reader – discover the tragic circumstances surrounding Archie’s failure to return from the war. The author resists the temptation to end the book on an uplifting note (echoes of Butch Cassidy and the Sundance Kid) although you could say that a kind of justice is served.

I thought the writing was superb and the characters of Frankie, Archie and Annie beautifully realized. There’s Archie, the gentle dreamer who believes it is his ‘destiny’ to liberate Europe, Frankie, the loyal friend tormented by guilt, and Annie, the feisty young woman torn between love and an unwillingness to forgive.  Although not an easy read, I found the book incredibly moving, immersive and utterly gripping.

The Sunken Road is the fifth book I’ve read from the thirteen books on the longlist for the Walter Scott Prize for Historical Fiction 2022 and it’s definitely up there with my favourite book so far, The Fortune Men.

Try something similar: Where God Does Not Walk by Luke McCallin

Ciaran McMenamin was born in Enniskillen, County Fermanagh, in 1975. A graduate of the RSAMD, he has worked extensively for the past twenty years as an actor in film, television and theatre. His acclaimed first novel, Skintown, was a WHSmith Fresh Talent pick.

Two young people meet at a pub in South East London. Both are Black British, both won scholarships to private schools where they struggled to belong, both are now artists – he a photographer, she a dancer – trying to make their mark in a city that by turns celebrates and rejects them. Tentatively, tenderly, they fall in love. But two people who seem destined to be together can still be torn apart by fear and violence.

At once an achingly beautiful love story and a potent insight into race and masculinity, Open Water asks what it means to be a person in a world that sees you only as a Black body, to be vulnerable when you are only respected for strength, to find safety in love, only to lose it.

Winner of the Costa First Novel Award 2021, Open Water is an inventive attempt to convey what it is like to be a Black man in today’s London and how racial prejudice by the police and other parts of society can have a damaging psychological effect.  The book also challenges commonly held ideas about masculinity, namely that men should hold their emotions in check.

The development of the relationship between the main character and a woman, whose name we also never learn, from a deeply felt friendship based on a shared love of music, dancing and art to something more is conveyed in a tender and touching way. It is she who makes the first move in putting their relationship on a more intimate footing. ‘She has swum out into open water, and it is not long before you join her.’ However, it’s a relationship that may be unable to survive in the face of an act of violence witnessed by the narrator, an act that might so nearly have happened to him, and which leaves him traumatised.

Written in the second person, the reader is encouraged to see themselves as the book’s unnamed protagonist. (For grammar nerds, the book also makes use of the historic present tense.)  Since the book references art, music and literature unfamiliar to me (although there is an accompanying playlist on Spotify), I’m not sure that it succeeded in making me experience events in a deeper way than if it had been written in the first person. In fact, given the similarities between the author and the book’s protagonist – they are both photographers, have grown up in South East London, and so on – there is an autobiographical quality to the book.

The writing is poetic in style with frequent use of repetition and utilising some imaginative similes, some of which worked better than others for me. For example, I liked the idea of the two of them being like ‘headphones wires tangling… A messy miracle’. However, the comparison of an extension lead trailing in the grass to ‘a loose thought’ or a ‘skinny whimper’ to being as ‘sharp as a butter knife’ (the whole point of butter knives surely being they are not sharp?) left me wondering if the author was trying a bit too hard to be profound.

Overall, I felt the important things the book has to say about racial prejudice, police violence and the everyday experiences of Black people, and in particular young Black men, just about survived the sometimes elaborate prose. I’m aware I’m in a minority when it comes to this since others have praised its ‘poetic brilliance’ and ‘lyrical and propulsive prose’. 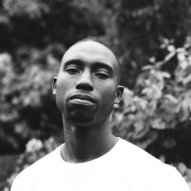