Today I’m delighted to be taking part in the blog tour to celebrate the special edition of After the Rising & Before the Fall by the acclaimed Irish historical novelist and poet, Orna Ross. It marks the centenary of the Irish Civil War of 1922/3 the events of which form the background to the books. Based on Orna’s own family history, the book was an instant bestseller when it was first published by Penguin Ireland 20 years ago. It has now been reissued by the author and is also being made available for the first time in audiobook format.

I’m delighted to bring you a guest post in which Orna writes about the events that inspired the novels, including her own family history.

A love forbidden by family. A feud spanning generations. A woman still yearning for freedom.

Twenty years after she was driven away from her family and the only man she ever truly loved, Jo Devereux has returned to the small Irish village where she grew up. And this time, she wants answers.

What happened to her family during the Irish Civil War? Did her great-uncle’s best friend really shoot him dead? And what did this “war of the brothers” mean for mothers, sisters and daughters?

Searching through papers bequeathed by her estranged mother, Jo uncovers astonishing truths about her grandmother and great-aunt – secrets of a cold-blooded murder with consequences that ricocheted down the generations into her own life.

Urged on by Rory O’Donovan, her lost love and the son of her family’s sworn enemies, Jo is tempted to reignite the fires of rebellion. Can she ever go back to the life she’d made for herself in San Francisco? Or will what she’s learning about her heritage incite her to cast off caution–and claim what should have been hers?

Find After the Rising & Before the Fall on Goodreads

Purchase links
Author website | Amazon UK
Links provided for convenience only, not as part of an affiliate programme

In William Faulkner’s words, “The past is never dead. It’s not even past.”

In 1923, my father’s uncle was shot dead in the civil war known in Ireland as “The War of the Brothers.” I wrote this book because I wanted to know how but mainly to explore the deep silences around the event – why nobody talked about this civil war which I knew, from my fiery great-aunt, had been a “war of the sisters” too.

I grew up in a village in the south-eastern corner of Ireland, called Murrintown. Back then it was tiny – no more than a handful of houses, a church, a post office, and our shop and pub – but small as it was, an unspoken divide separated its few families.

As children, we knew who was one of ‘us’. Nobody put into words who or what ‘we’ were, but we carried the divide within us. We were born it and we passed it on, without asking why. I knew from my fiery aunt that it was something to do with being a republican, but I wasn’t quite sure what a republican was.

Our Irish school history books were full of our glorious Easter 1916 Rising against British rule, of the glorious War of Independence of 1918 to ’21, of our glorious admission into the League of Nations in 1924. But the Civil War of 1922/23? That was a blank page.  And, as my father’s uncle had been killed in that war (murdered, my great-aunt said), that was the one I wanted to know more about.

Was it true that he’d been shot dead by his best friend? That he’d been killed because he was in the IRA (the “old IRA” who were heroes, I was told, not the new IRA who were then bombing Northern Ireland and the UK)? How could this have happened? My persistent questions got vague answers. Nobody knew anything. Least said, soonest mended. Whatever you say, say nothing.

Someday, I told my friend who sat beside me in school, I was going to write a book about all this. Then I grew up, and rejected it all – the public, nationalist politics and the private family history. I left home, went to university, found feminism and a different way of thinking about everything.

When you reject something, though, you’re not indifferent – as I learned when, approaching middle-age, I set about fulfilling that long-ago vow to my friend, and beginning that long-promised book, though my aunt was now dead.

I turned to old County Wexford newspapers, old documents in libraries and archives, old books written by those who’d been part of the conflicts of that time. I began to make notes. And somewhere along the line, research and memory gave way to imagination. I never did find out what really happened to my great-uncle. It turned out that I was writing a novel.

It’s now almost 100 years since the events they describe happened and today Ireland is at the end of a ten-year programme commemorating “the many significant centenaries” of the decade from 1913 to 1923”, including the suffrage movement, the trade union struggles, the Easter Rising of 1916, the foundation of the Irish Free State, and they promise, the Civil War.

What happened to Jo, her ancestors and descendants, has now grown into a three-volume saga, After the Rising, Before the Fall and In the Hour, covering the lives of five generations of women, across two continents. I will launch the third volume of the book next year, in 2023, 100 years after my uncle was shot.

As I look back over the writing of this trilogy, I see now why it had to be a novel. Only the inventions of fiction could contain the truths of that time – and its ambivalent legacy. Only fiction could recreate those people who’d been wiped out of the history books. I hope they, and their way of life, will live again for you as you read.

So, it felt timely to re-release a centenary edition of the first two volumes of this Irish trilogy in advance of publishing the third and final book of this story.

Orna Ross is a bestselling and award-winning independent author. She writes historical fiction – mostly multi-generational murder mysteries – inspirational poetry and, as Orna A Ross, creative and publishing guides for authors. Born and raised in County Wexford, in the south-east corner of Ireland, she now lives in London and in St Leonard’s-on-Sea, in the south-east corner of England. In 2012, she founded the award-winning non-profit organization, the Alliance of Independent Authors (ALLi), with her husband and business partner.

Welcome to today’s stop on the blog tour for A Ration Book Victory by Jean Fullerton. My thanks to Rachel at Rachel’s Random Resources for inviting me to take part in the tour and to Corvus for my digital review copy. Do check out the posts by my tour buddies for today, Rachel at Rachel Brimble Romance and Joules at Northern Reader.

There’s also a (UK only) giveaway with a chance to win one of 6 signed copies of A Ration Book Victory. Enter via Rafflecopter here.

In the final days of war, only love will pull her through . . .

Queenie Brogan wasn’t always an East End matriarch. Many years ago, before she married Fergus, she was Philomena Dooley, a daughter of Irish Travellers, planning to wed her childhood sweetheart, Patrick Mahone. But when tragedy struck and Patrick’s narrow-minded sister, Nora, intervened, the lovers were torn apart.

Fate can be cruel, and when Queenie arrives in London she finds that Patrick Mahon is her parish priest, and that the love she had tried to suppress flares again in her heart.

But now in the final months of WW2, Queenie discovers Father Mahon is dying and must face losing him forever. Can she finally tell him the secret she has kept for over fifty years or will Nora once again come between them?

And if Queenie does decide to finally tell Patrick, could the truth destroy the Brogan family? 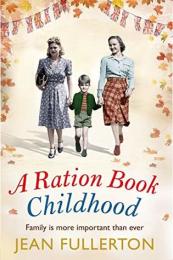 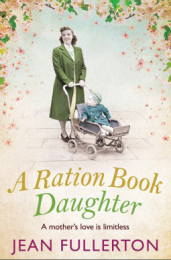 A Ration Book Victory not only allows readers to catch up with the Brogan family as the end of WW2 approaches but also explores the early life in Ireland of the formidable matriarch of the clan, Queenie – or Philomena Dooley as she was known then. It’s a tender story of early love that might not have stood up on its own but works well alongside the goings-on in the Brogan household in the final months of the war. However, although the war in Europe may soon be over there’s still fighting continuing elsewhere and not everyone is yet out of danger.

What an extensive clan the Brogan family have become! The book gives us an endearing picture of a multi-generational household, where everyone pitches in and there aren’t many problems that can’t be solved over a cuppa.  It’s a family that includes a surprising amount of diversity including adopted and illegitimate children, and interracial relationships.

The book has a beautifully judged balance of humour – a case of mistaken identity during the VE Day celebrations springs to mind – and moments of sadness. I doubt many will have a dry eye as Queenie faces up to the impending death of the man she has known – and loved – for fifty years, Father Mahon. And I’m quite sure readers like me will be praying that characters such as Nora Mahon and Aunt Pearl get a suitable come-uppance.

I thought A Ration Book Victory was the perfect ending to the series with all of Ida’s and Jeremiah’s children branching out and moving on, as are they themselves. ‘The world had changed, and the Brogans had changed with it.’

Try something similar: The Woman with the Map by Jan Casey

Born and bred in East London Jean is a District Nurse by trade and has worked as a NHS manager and as a senior lecture in Health and Nursing Studies. She left her day job to become a full-time writer in 2015 and has never looked back.

In 2006 she won the Harry Bowling Prize and now has seventeen sagas published over three series all of which are set in East London.

She is an experienced public speaker with hundreds of WI and women’s club talks under her belt, plus for the past fifteen years she has sailed all over the world as an enrichment speaker and writing workshop leader on cruise ships.