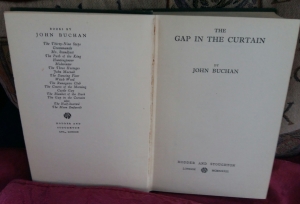 I first shared my review of The Gap in the Curtain by John Buchan as part of my Buchan of the Month project in July 2020. Although I own a first edition of the book (unfortunately without a dustjacket) I couldn’t resist pre-ordering a copy of a new edition to be published by Handheld Press on 9th November 2021, especially since it has an introduction by Kate Macdonald, who has published widely on the life and works of John Buchan.

To pre-order or purchase a copy of The Gap in the Curtain, visit the Handheld Press website, You can read an updated version of my original review below.

John Buchan (1875-1940), author of over 100 books including The Thirty-Nine Steps, was a stealth writer of supernatural and Weird fiction. His 1932 novel The Gap in the Curtain was his last full-length work devoted to exploring a supernatural theme: if you were able to see one year into the future, what would you do with that foreknowledge? And what would it do to you?

The novel tells the story of five country-house guests who are trained by the ailing Professor Moe, an Einsteinian mathematician who has devised a way of seeing into the future.  These five guests each gain one piece of knowledge from the experiment, and have to decide how to act on it. The episodes vary from high drama to social comedy, and use Buchan’s skill in writing political intrigue and adventure abroad. He uses the theme of precognition to show how Fate may not be escaped, no matter how we ingeniously we attempt to wriggle past it.

Written between March 1930 and February 1931, The Gap in the Curtain was published in the UK by Hodder & Stoughton on 7th July 1932 and in the US by The Riverside Press on 27th July 1932. The book is dedicated to his friends, Sybil and Lambert Middleton.

The Gap in the Curtain concerns the experiences of a group of guests at a country house party, including lawyer Sir Edward Leithen, who take part in an experiment conducted by the enigmatic Professor Moe. After a period of ‘training’ involving mental exercises and a special diet, they are each given a glimpse of the future by way of an item in The Times newspaper dated a year hence. Being a logical and down-to-earth fellow, Leithen sees nothing but a blank page. However, the other five who take part are profoundly affected by what they see. The different ways in which they react to the foreknowledge they have been granted over the next twelve months are recounted by Leithen.

For two of the guests, David Mayot and Arnold Tavanger, the insights relate to the worlds of politics and finance. The attempts by Mayot (described by Leithen as having ‘not a very generous allowance of brains’ and ‘as much magnetism as a pillar-box’) to second-guess how the political situation he saw might come about involves a good deal of tactical and frankly not very principled behind the scenes manoeuvring. The satirical nature of Buchan’s exposition of the positions of different political factions may have been more obvious to readers of the day.

What keen investor Arnold Tavanger sees in The Times leads him to embark on a journey across continents to secure what he believes will bring him huge financial rewards. His epic trip across Africa sees him take to the air with a pilot ‘who was one-fourth scientist and three-fourths adventurer, and who did not value his on or anybody else’s life at two pins’. They encounter thunderstorms and at one point end up with two lizards and a snake in the fuselage! In the end though, Tavanger’s experiences lead him to conclude ‘Our ignorance of the future has been widely ordained of Heaven. For unless man were to be like God and know everything, it is better that he should know nothing. If he knows one fact only, instead of profiting by it he will assuredly land in the soup’.

Reggie Daker’s insight into what he will be undertaking a year hence takes him completely by surprise, being the last thing on earth he would consider doing. However, over the course of the next few months, the reader witnesses the influence of the attractive Verona Cortal and her family on the rather compliant by nature Reggie. Says Leithen, ‘He had the air of a smallish rabbit caught in a largish trap. But it was a stoical rabbit, for to me he made no complaint’. Eventually, fate lends a hand to provide Reggie with a means of escape.

The final two guests – Robert Goodeve and Captain Charles Ottery – both see articles in The Times concerning themselves that are much more profound in nature. It is in their two stories that Buchan really addresses the notions of predestination and free will. For one of the characters, the fate he is presented with turns him into a haunted man. It confirms a subconscious belief he has always held that his is a family whose lives are destined to end tragically, that ‘They have spirit without fortitude’. For the other, it provokes a courageous response to the hand dealt him, helped by the love of a good woman. “What concerned him was how to pass the next eight months without disgracing his manhood”. It seems clear which of the two responses Buchan admires most. Not only because of the way the last story ends but also because it contains a reference to one of Buchan’s most cherished books, The Pilgrim’s Progress by John Bunyan. “He had come out of the Valley of the Shadow to the Delectable Mountains.”

The book received some warm reviews upon publication, notably from J.B. Priestley who praised Buchan’s ‘gallant versatility’ and recommended it as a book that could be read ‘with excitement and profit’. Janet Adam Smith, Buchan’s first biographer, reports that The Gap in the Curtain had sold 78,000 copies up to 1960.

David Daniell, author of The Interpreter’s House: A Critical Assessment of John Buchan (Nelson, 1975), describes The Gap in the Curtain as a ‘satirical’ book in which Buchan takes aim at the world of international finance and politics. Ursula Buchan, John Buchan’s granddaughter and author of Beyond The Thirty-Nine Steps: A Life of John Buchan (Bloomsbury, 2019), suggests the ‘brilliant, lengthy and disillusioned description of British politics at that time’ reflects Buchan’s own experiences as a Member of Parliament. Andrew Lownie, author of John Buchan: The Presbyterian Cavalier (Constable, 1995), feels that, although the idea of being able to look into the future was not new, Buchan was able to give it a new spin. He also finds it significant that the action of the book takes place at Easter citing its exploration of the redemptive power of love, the nature of Free Will and the concept of predestination.

In her fascinating introduction to the new edition, Kate Macdonald comments that Buchan used the supernatural ‘not to explore other realms, but to agreeably frighten his readers, in highly-skilled entertainment’.

Try something similar: The Watcher by the Threshold by John Buchan

The Classics Club was founded in March 2012 with the aim of encouraging more people to blog about classic literature.  Members are invited to create a list of at least 50 classic titles they intend to read and blog about within a maximum of five years.  With characteristic over-enthusiasm, when I first enrolled in the challenge in January 2017, I set out to read the 50 classics on my list by 31st December 2018.   I soon recognised that was way too ambitious and revised it to 31st December 2021.

In putting together my list, my personal definition of “classic” was a book published more than 40 years ago, i.e. anything published before 1976. I also decided to concentrate on two categories: women writers and the works of John Buchan, one of my favourite authors.

I’m pleased to say, having just read the final two books on my list as part of the latest Classics Club Spin event, I’ve completed the challenge with a little under five months to spare. As well as reading some wonderful books I might not have otherwise read, I now qualify for a place on The Classics Club Wall of Honour! You can view the list of books I read with links to my reviews here.

And before you ask, since I’m already signed up to quite a few other reading challenges, I don’t intend to attempt another fifty classics. What I will do is continue to follow The Classics Club blog as well as read and share the reviews of other Classics Club members. 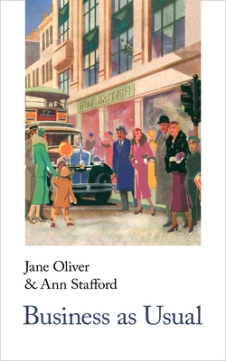 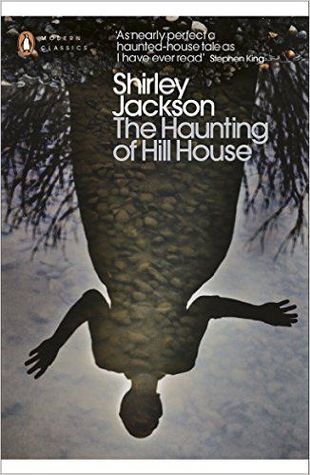