Monday – I shared my review of The Night Ship by Jess Kidd.

Tuesday – I published my review of Mother of Valor by Gary Corbin.

Wednesday – As always WWW Wednesday is a weekly opportunity to share what I’ve just read, what I’m currently reading and what I plan to read next… and to take a peek at what others are reading.

Friday – I did a wrap-up of my participation in the #NetGalleyNovember reading challenge.

Saturday – The first Saturday of the month means it’s time for the #6Degrees of Separation meme which saw me forging a chain from The Snow Child by Eowyn Ivey to The Buccaneers by Edith Wharton.

A charity bookshop find and an eARC from NetGalley. 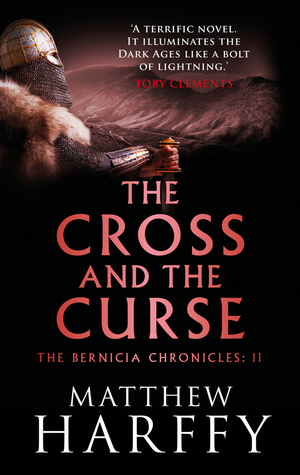 The Cross and the Curse by Matthew Harffy (Aria)

AD 634, Anglo-Saxon Britain: warlords battle across Britain to become the first king of the English.

After a stunning victory against the native Waelisc, Beobrand returns a hero. His valor is rewarded with wealth and land by Oswald, king of Northumbria. He retires to his new estate with his bride only to find himself surrounded by enemies old and new.

With treachery and death on all sides, Beobrand fears he will lose all he holds dear. On a quest for revenge and redemption, he accepts the mantle of lord, leading his men into the darkest of nights and the bloodiest of battles.

The Witch in the Well by Camilla Bruce (eARC, Bantam via NetGalley)

Over a hundred years ago, the citizens of F- did something rather bad. And local school teacher Catherine Evans has made writing the definitive account of what happened when Ilsbeth Clark drowned in the well her life’s work.

The town’s people may not want their past raked up, but Catherine is determined to shine a light upon that shameful event. For Ilsbeth was an innocent, after all. She was shunned and ostracised by rumour-mongers and ill-wishers and someone has to speak up for her. And who better than Catherine, who has herself felt the sting and hurt of such whisperings?

But then a childhood friend returns to F -. Elena is a successful author whose book, The Whispers Inside: A Reawakening of the Soul, has earned her a certain celebrity. In search of a new subject, she takes an interest in the story of Ilsbeth Clark and announces her intention to write a book about the long-dead woman, focusing on the natural magic she believes she possessed.

And Elena has everything Catherine has not, like a platform and connections and no one seems to care that Elena’s book will be pure speculation, tainting Ilsbeth’s memory rather than preserving it. Catherine is determined that something must be done and plots to blunt her rival’s pen. However she had not allowed for the fact that the past might not be so dead after all – that something is reaching out from the well, disturbing her reality.

Before summer’s over, one woman will be dead, the other accused of murder . . . but is she really guilty, or are there other forces at work? And who was Ilsbeth Clark, really? An innocent? A witch? Or something else entirely?

The #NetGalleyNovember reading challenge is over for another year and it’s time to see how I did.

I managed to read seven books from my NetGalley shelf (see below) including my oldest approval, The Labyrinth of the Spirits. You can probably work out why it was my oldest approval when I tell you it was over 800 pages long. Links from the book titles will take you to the book description on Goodreads or to my review. My thanks to the publishers who provided me with the review copies via NetGalley, some of them a very long time ago…

Unfortunately, although I read the number of books I targeted my feedback ratio didn’t increase by as much as I’d hoped because of new approvals, mostly for blog tours. And I didn’t manage to complete all the squares on the #NetGalleyNovember Bingo card. However, I very much enjoyed participating in the challenge and sharing my progress with the other bloggers taking part. My thanks to the Neverending NetGalley team for organising the challenge once again. 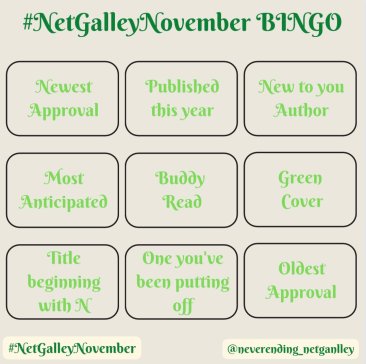