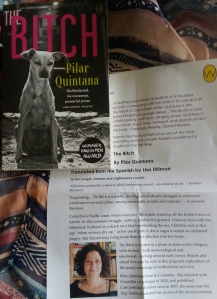 Colombia’s Pacific coast, where everyday life entails warding off the brutal forces of nature. In this constant struggle, nothing is taken for granted. Damaris lives with her fisherman husband in a shack on a bluff overlooking the sea. Childless and at that age “when women dry up”, as her uncle puts it, she is eager to adopt an orphaned puppy. But this act may bring more than just affection into her home.

Beauty and dread live side by side in this poignant exploration of the many meanings of motherhood and love.

Find The Bitch on Goodreads

The publishers describe The Bitch as being written in ‘terse prose’ and, in one of the cover quotations, Colombian writer Juan Gabriel Vasquez characterizes the prose as ‘no-nonsense’. I can only agree, as the writing in this slim novel, translated from the Spanish by Lisa Dillman, contains few literary flourishes. That doesn’t mean, however, that the writing lacks power.

I particularly liked the way the author makes the jungle that surrounds the shack in which Damaris and her husband live seem like a character in its own right. Damaris recalls a childhood journey alone through the jungle: ‘The treetops above her formed a solid canopy, and the roots below snarled together. Her feet sank into the dead leaves carpeting the ground and got buried in the mud, and she began to feel like the breathing she could hear was not her own but that of the jungle…’ Later in the book, she faces the prospect of venturing out at night. ‘Before her lay nothing but jungle, still as a beast that’s just swallowed its prey”. In truth, the jungle does indeed harbour very real dangers – venomous snakes and insects.

The Bitch is the third book I’ve read set in Colombia. The first two were The Existence of Pity by Jeannie Zokan and A Reluctant Warrior by Kelly Brooke Nicholls. The latter especially featured the drugs trade as part of its storyline. And, as it happens, later this week I’ll be taking part in the blog tour for Son of Escobar: First Born, a book by the son of notorious drug baron, Pablo Escobar, who controlled eighty per cent of the global cocaine trade before he was shot dead in 1993.

The Bitch portrays another side of Colombia, not necessarily a more attractive side, but one which probably challenges many commonly-held perceptions about the country. Through the experiences of Damaris, it provides an insight into the everyday lives of the ordinary people of Colombia. At times, it was only the mention of cell phones that reminded me the book is set in the present day, so basic are the conditions in which Damaris and her husband, Rogelio, live.

I was struck by the contrast between the ‘big, beautiful weekend homes with gardens, paved walkways and swimming pools’ which Damaris and Rogelio are employed to look after for their absent owners and their own home. ‘The shack where they lived was made of wood and in bad shape. When a storm hit, the whole place shook in the thunder and rocked in the wind, water leaked through the roof and came in through the gaps between wall slats.’

As the book reveals, there’s not just an economic divide but a social one as well. When Damaris and her relatives use the pool of one of the houses one afternoon, she thinks to herself, ‘Nobody would ever mistake them for the owners. A band of poor, badly dressed black folks using rich people’s things’.

It’s difficult not to feel sympathy for Damaris, despite some of the actions she takes towards the end of the book. Her inability to have a child leaves her feeling ‘crushed and inadequate, a disgrace as a woman, a freak of nature’. She also harbours a sense of guilt at her failure as a young girl to prevent a tragedy; so much so that she feels she somehow deserves the hardships and disappointments in her life. That, if anything, these are not punishment enough. When further misfortunes are visited on the same family, she fears they will see her as ‘a black crow, a sign of bad luck’.

Initially devoted to the dog she adopts, which she names Chirli for the daughter she never had, Damaris becomes frustrated and angry when the dog continually misbehaves and runs away. Having drifted apart in recent years, for a brief time the relationship between Rogelio and Damaris is rekindled when he joins her in the search for the dog. Sadly, this is short-lived. Later, the dog’s return acts as a troubling reminder of what has been missing from Damaris’s life. Her disappointment will eventually turn to horror and provoke a rather shocking act of despair and desperation.

I can’t say I found The Bitch an easy read but it certainly provided an insight into a part of the world about which I knew very little. To mark its publication, the book has recently been on tour. Check out the banner at the bottom of this post to see the bloggers who took part.

A final word about the publishers, World Editions. Not only do I admire their championing of translated literature but also that, as well as providing biographical information about the authors and translators of the books they publish, they also include details about the typography and cover designs. Which means, for instance, you get to find out how the cover image for The Bitch came about.

My thanks to World Editions for my advance review copy.

Pilar Quintana is a Colombian author. She debuted with Cosquillas en la lengua in 2003, and published Coleccionistas de polvos raros in 2007, the same year the Hay Festival selected her as one of the most promising young authors in Latin America. Her latest novel, The Bitch, won the prestigious Colombian Biblioteca de Narrativa Prize, and was selected for several Best Books of 2017 lists, as well as being chosen as one of the most valuable objects to preserve for future generations in a marble time capsule in Bogotá. The Bitch is the first of her works to be translated into English.

Lisa Dillman lives in Georgia, USA, where she translates Spanish, Catalan and Latin American writers and teaches at Emory University. Some of her recent translations include Such Small Hands (winner of the 2018 Oxford-Weidenfeld Translation Award) by Andrés Barba; Signs Preceding the End of the World (winner of the 2016 Best Translated Book Award), Kingdom Cons, and The Transmigration of Bodies (shortlisted for the 2018 Dublin Literary Award) by Yuri Herrera,; and Breathing Through the Wound and A Million Drops by Víctor del Árbol. 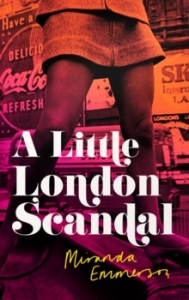 Nik felt the mistake in his bones. The man in the snakeskin suit reached down towards him and pulled Nik upright by the collar of his coat. Nik didn’t see what happened next but he felt the wall. He cried out and then someone hit him and he closed his eyes and waited for it to be over.

London, 1967. Nik Christou has been a rent boy since he was 15. He knows the ins and outs of Piccadilly Circus, how to spot a pretty policeman and to interpret a fleeting glance. One summer night his life is turned upside down, first by violence and then by an accusation of murder.

Anna Treadway, fleeing the ghosts of her past, works as a dresser in Soho’s Galaxy theatre. She has learned never to place too much trust in the long arm of the law and, convinced Nik is innocent, she determines to find him an alibi.

Merrian Wallis, devoted wife to an MP with a tarnished reputation, just wants proof that her husband couldn’t have been involved.

But how do you recognise the truth when everyone around you is playing a role – and when any spark of scandal is quickly snuffed out by those with power? As Anna searches for clues amongst a cast of MPs, actors, members of gentlemen’s clubs and a hundred different nightly clients, will anyone be willing to come forward and save Nik from his fate?

I really enjoyed Miranda Emmerson’s debut novel, Miss Treadway and the Field of Stars. In fact, it was one of the first books I reviewed on this blog. Many of the characters from that book make a return in A Little London Scandal, although it works perfectly well as a standalone. There’s Ottmar, owner of the Alabora cafe, and the actors and backstage staff at the Galaxy Theatre where Anna works as a dresser. Sergeant Barnaby Hayes, whose partnership with Anna enabled them to solve the mystery at the heart of the first book, also returns although his involvement in that earlier case has not been without its consequences.

Anna’s boyfriend, Louis (or Aloysius if you’re being formal) has less of a starring role in this book, having returned to Jamaica on family business. Theirs is a long-distance relationship for the time being, conducted by means of the exchange of touching postcards and letters.

Anna’s innate sense of justice means she cannot stand by when Nik, whom she knows from the Alabora cafe, is arrested and charged with a murder she is convinced he did not commit. She enlists Barnaby’s help again and, alternating with the progress of their investigation, we learn the story of Nik’s troubled teenage years and adolescence. It takes the reader to some dark places inhabited by seedy individuals – about as much fun as the prospect of a colonoscopy.

Given Anna’s occupation, I liked how the theme of performance or playing a part is woven into the book. With homosexuality yet to be decriminalized, many are forced to hide their sexuality and to pretend to be something they are not for fear of arrest or blackmail. (It made me think of the film Victim starring Dirk Bogarde, who in reality led a somewhat double life.)

Merrian, wife of MP Richard Wallis, knows all about playing a part – the part of perfect wife and mother. She’s a really sympathetic, believable character who has sacrificed a lot in order to advance her husband’s career and present the outside world with the picture of a traditional family. What she knows, or suspects, about her husband’s secrets she keeps to herself until, she too, is drawn into Anna’s search for justice and shows unexpected mettle.

I loved the way Anna’s natural empathy, drawing on what we learn about her own troubled past, enabled her to gain Nik’s confidence and trust. And I admired her bold, if slightly reckless, willingness to take action.

The book perfectly captures the atmosphere of 1960s London – Carnaby Street, miniskirts, late night jazz clubs and coffee bars. (There’s even a scene in a Wimpy bar. Remember those?) The story takes the reader on a journey from exclusive gentlemen’s clubs, via Wormwood Scrubs and the nightlife haunts of down and outs and rent boys, to illicit music events on Eel Pie Island. (Incidentally, this is the second book I’ve read featuring Eel Pie Island as a location. The first was The Secret Life of Alfred Nightingale by Rebecca Stonehill.)

The book has lovely little touches like the quirky chapter headings, my favourite being “Very Expensive Penguins”. (Sorry, Miranda, there was no way I could get Jerry’s third word into my review.)

A Little London Scandal combines an intriguing mystery with a vivid portrait of London at a time of change. I received an advance review copy courtesy of 4th Estate via NetGalley.

Miranda Emmerson is a playwright and author living in Wales. She has written numerous drama adaptations for BBC Radio 4 as well as some highly-acclaimed original drama. Her debut novel, Miss Treadway and The Field of Stars, was published by 4th Estate in 2017.