When he hears a story about a huge dinosaur fossil locked deep inside an Alpine glacier, university professor Stan finds a childhood dream reignited. Whatever it takes, he is determined to find the buried treasure.

But Stan is no mountaineer and must rely on the help of old friend Umberto, who brings his eccentric young assistant, Peter, and cautious mountain guide Gio. Time is short: they must complete their expedition before winter sets in. As bonds are forged and tested on the mountainside, and the lines between determination and folly are blurred, the hazardous quest for the Earth’s lost creatures becomes a journey into Stan’s own past.

Find A Hundred Million Years and a Day on Goodreads

‘It’s true that a story often begins with a road, but I wish I knew what made mine so tortuous.’

The book opens with Stan’s poignant childhood memory of returning home after school, seeing the closed shutters of a bedroom window and realising, even as a six year old, that he should not disturb his mother. ‘In such moments she needed darkness, and darkness alone.’ The reasons for this will gradually become apparent.

Stan’s discovery near his farmland home of a fossil – a trilobite – awakens an interest in palaeontology. ‘It was three hundred million years old, and I was six.’ It’s an interest that is encouraged by his mother but discouraged by his bully of a father (known as the Commander) who desires Stan to take over the family business.

Moving ahead forty years to 1954 and Stan is now a Professor of Palaeontology in Paris. He has never forgotten the story of an old man’s discovery of a dinosaur fossil in a cave within a glacier in the Alps. Finding the site has become an obsession. Along with Umberto, a friend and colleague of many years, Umberto’s assistant Peter, and local guide Gio, the four men embark on the expedition of a lifetime. (There is another member of the group but I’ll leave you to read the book to find out more about him!)

I loved the way each of the men were fully rounded characters.  Umberto is a giant of a man with a ‘good, big, stone soul’.  When it comes to excavation he has ‘magic in his hands’ able to gently release ‘time’s grip’ on a fossil. His loyalty to Stan means leaving personal commitments back home. Gio’s instinct for changing weather conditions and his knowledge of the mountains is unparalleled.  However, he also knows only too well what dangers they hide. Peter is described as having a ‘genius for the absurd’ which will be demonstrated all too clearly.

I admired the way the author explored the dynamics between the men, especially as summer gives way to autumn and every day seems to present a new obstacle to overcome in order to achieve their objective.  The frustration and anger that festers beneath the surface is vividly brought to life in a memorable paragraph delivered in stream of consciousness style.

Another striking aspect of the book is its use of anthropomorphism so that even the weather seems to exhibit a life of its own.  For example, autumn is described as ‘prowling at the edge of the plateau… a beast of flesh and claws’.  As weeks turn to months it becomes akin to a battle of wits between the men and the glacier, as if the glacier is actively seeking to thwart their efforts.  It certainly feels that way to Stan.

When winter truly arrives, every day, every hour even, becomes a struggle to survive and retain a grip on sanity. I really felt I was there on the mountain alongside Stan but, of course, invisible to him, which makes his feelings of loneliness and attempts to ward off madness all the more poignant. At one point he observes, ‘I am surrounded by millions and millions of cubic metres, acres, tons of nothingness, void, absence’.

Interspersed with the story of the expedition are Stan’s memories of events earlier in his life: memories of rejection, loss, cruelty and violence.  However, Stan’s history of misreading situations or misinterpreting the feelings of others made we wonder how much I could truly trust his viewpoint.  The author challenged me to think about Stan’s real motivation. Is it the professional acclaim that will come from the discovery of possibly a new species of dinosaur, the achievement of a long-held dream, or a belated attempt to prove to his father that he is not the failure and weakling he was accused of being?

Sam Taylor’s translation expertly showcases the author’s wonderful turns of phrase. For example, the description of the valley from which the group start their climb as being an ‘eternal vendetta between stone and water’.  Or when, later in the book, the men awake to a heavy snowfall that finds them in snow up to their chests, the scene is likened to a ‘polar morning in Pompeii: our torsos floating on an ocean of powder, statues lost at sea’.

The low page count of A Hundred Million Years and a Day belies the power of the story it contains. As is often the case, the best things do come in small packages. My thanks to Isabelle Flynn at Gallic Books for my review copy, published today in a new paperback edition. 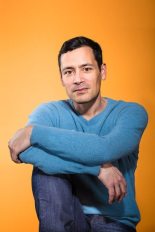 Jean-Baptiste Andrea was born in 1971 in Saint-Germain-en-Laye and grew up in Cannes. Formerly a director and screenwriter, he published his first novel, Ma Reine, in 2017. It won twelve literary prizes including the Prix du Premier Roman and the Prix Femina des Lycéens. (Photo credit: Publisher author page)

Sam Taylor is an author and former correspondent for The Observer. His translations include Laurent Binet’s HHhH, Leila Slimani’s Lullaby and Maylis de Kerengal’s The Heart, for which he won the French-American Foundation Translation Prize. 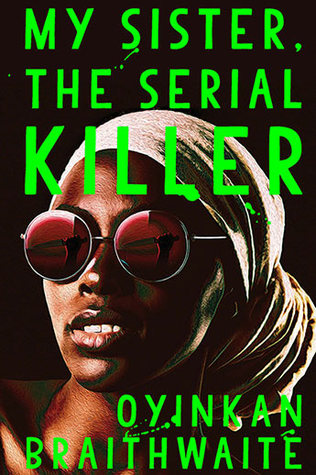 “Femi makes three you know. Three and they label you a serial killer.”

When Korede’s dinner is interrupted one night by a distress call from her sister, Ayoola, she knows what’s expected of her: bleach, rubber gloves, nerves of steel and a strong stomach. This’ll be the third boyfriend Ayoola’s dispatched in “self-defence” and the third mess that her lethal little sibling has left Korede to clear away.

She should probably go to the police for the good of the menfolk of Nigeria, but she loves her sister and, as they say, family always comes first. Until, that is, Ayoola starts dating a doctor at the hospital where Korede works as a nurse. Korede’s long been in love with him, and isn’t prepared to see him wind up with a knife in his back: but to save one would mean sacrificing the other…

Find My Sister, the Serial Killer on Goodreads

My Sister, The Serial Killer is a short book but for me that just added to its attraction.  I loved its taut style with not a word wasted which created a real energy to the story .

Although her conscience tells her she should, Korede’s sense of loyalty to her sister, Ayoola, makes her unwilling to go to the police. Her mother’s words to her on the birth of her sister, ‘Big sisters look after little sisters’, also echo in her mind. Korede finds comfort in sharing her concerns about her sister’s actions with Muhtah, one of the patients in the hospital where she works. He’s been in a coma for a long time and is deemed unlikely to recover so Korede views her one-sided conversations with him as akin to the secrets of the confessional.

Ayoola seems untroubled by her conscience, having convinced herself on each occasion she was acting in self-defence. She prefers to concentrate on posting on social media, designing clothes and deciding what to wear next.  Basically, she craves being the centre of attention. As Korede observes, ‘Ayoola lives in a world where things must always go her way. It’s a law as certain as the law of gravity’.

Beneath the surface, the reader suspects both sisters’ behaviour has been affected by their childhood experiences. Korede’s passion for cleanliness, even as a nurse, is surely more than just a desire to get rid of germs and Ayoola’s dispatch of troublesome boyfriends is perhaps a replacement for another person she would have liked to have got rid of.

Things come to a head when Ayoola sets her sights on Dr. Tade Otumu, a doctor at the hospital where Korede works and for whom Korede harbours a secret admiration. As well as being a skilled medical practitioner, he’s always cheerful, often singing or whistling as he goes about his duties. In fact, he’s described at one point as ‘a walking music box’ making you understand why not only does he lift the spirits of his patients but Korede’s too. As sisterly affection and loyalty is pushed to the limits, Ayoola sagely warns Korede, “You can’t sit on the fence forever”.

Set in Lagos, the book provides an insight into Nigerian family life, social customs, food, and so on. I was struck by the fact the family’s house girl is never referred to by name. She’s always merely ‘the house girl’ despite being a constant presence in the family’s life, preparing food, waiting on guests and carrying out a multitude of household tasks.

My Sister, The Serial Killer is a darkly comic novel about the limits of sibling loyalty. I loved its wit, energy and inventiveness, and can fully understand its inclusion on so many literary prize lists, notably the shortlist for the Women’s Prize for Fiction 2019 and the longlist for the Booker Prize 2019.

I received an advance review copy courtesy of Atlantic Books and Readers First.

Try something similar: The Secret Lives of Baba Segi’s Wives by Lola Shenayin

Oyinkan Braithwaite is a graduate of Creative Writing and Law from Kingston University. Following her degree, she worked as an assistant editor at the publishing house, Kachifo, and has been freelancing as a writer and editor since. In 2014, she was shortlisted as a top-ten spoken-word artist in the Eko Poetry Slam and in 2016, she was shortlisted for the Commonwealth Short Story Prize. (Photo credit: Goodreads author page)

She lives in Lagos, Nigeria.