Welcome to today’s stop on the blog tour for A Winter Grave by Peter May. My thanks to Jess at Ransom PR for inviting me to take part in the tour and to riverrun for my review copy via NetGalley.

A TOMB OF ICE

A young meteorologist checking a mountain top weather station in Kinlochleven discovers the body of a missing man entombed in ice.

Cameron Brodie, a Glasgow detective, sets out on a hazardous journey to the isolated and ice-bound village. He has his own reasons for wanting to investigate a murder case so far from his beat.

Brodie must face up to the ghosts of his past and to a killer determined to bury forever the chilling secret that his investigation threatens to expose.

Find A Winter Grave on Goodreads

A Winter Grave is set in Scotland but it’s not a Scotland we would recognise. The year is 2051 and Scotland has achieved independence and rejoined the European Union. However, at the same time, the effects of climate change on the world have become all too obvious. Whilst parts of the world are suffering extreme heat, prompting the migration of millions of people from Africa and Asia to Europe, great swathes of Scotland are now under water due to rising sea levels caused by the melting of the Greenland ice sheets and the country now has the climate of northern Norway.

As Brodie investigates the death of a man found frozen in the ice of a snow tunnel, it becomes clear his enemy is not just the person or persons responsible for the man’s death but the weather as well. Ferocious storms have become a frequent occurrence for the residents of Kinlochleven, resulting in power cuts and the loss of communications with the outside world for days at a time. Venturing out into a particularly violent storm, Brodie witnesses the extreme weather conditions for himself. ‘He seemed to be driving headlong into the gale. Hailstorms flew out of the darkness like sparks, deflecting off the windscreen… He could barely see the road ahead of him, hail blowing around and drifting like snow on the recently cleared tarmac.’

Alongside an absorbing and action-packed crime story, and the depiction of the potential impacts of climate change on the world, is Inspector Cameron Brodie’s deeply personal story, told through flashbacks to 2023. Brodie hasn’t long left on this earth but in the time remaining he wants to lay to rest the ghosts of the past, attempt a reconciliation and, perhaps, receive forgiveness. ‘It wasn’t until now, with his own death imminent, that he had been moved, finally, to drag all the skeletons from the closet, and lay them out to be judged.’ It’s a story of love, loss and sacrifice and I found the end of the book intensely moving.

For those who like action, there’s plenty of it and for those who like intrigue, there’s plenty of that as well. There’s even a role for future technology the prospect of which might either thrill you or appall you depending on how you feel about flying in a pilotless plane or living in a 3D printed home.  Add to this a central character prepared to give his all in one last fight and you have a totally gripping crime thriller that is chilling in more ways than one. This is the first book I’ve read by Peter May but it definitely won’t be the last.

Try something similar: The Coming Darkness by Greg Mosse

Peter May was born and raised in Scotland. He was an award-winning journalist at the age of twenty-one and a published novelist at twenty-six. When his first book was adapted as a major drama series for the BBC, he quit journalism and during the high-octane fifteen years that followed, became one of Scotland’s most successful television dramatists. He created three prime-time drama series, presided over two of the highest-rated serials in his homeland as script editor and producer, and worked on more than 1,000 episodes of ratings-topping drama before deciding to leave television to return to his first love, writing novels.

In 2021, he was awarded the CWA Dagger in the Library Award. He has also won several literature awards in France, received the USA’s Barry Award for The Blackhouse, the first in his internationally bestselling Lewis Trilogy; and in 2014 was awarded the ITV Specsavers Crime Thriller Book Club Best Read of the Year award for Entry Island. Peter now lives in South-West France with his wife, writer Janice Hally. (Photo: Facebook profile) 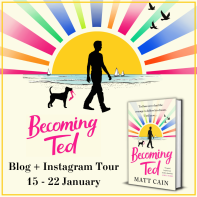 My thanks to Joe Thomas at Headline for inviting me to take part in the blog and Instagram tour for Becoming Ted by Matt Cain and for my review copy via NetGalley.

Becoming Ted was published on 19th January 2023 and is available in hardback and as an ebook and audiobook.

Do head over to Instagram to check out the reviews and gorgeous pics posted by the other bloggers taking part. 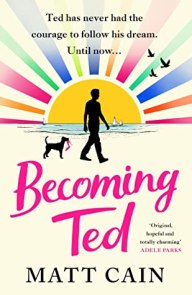 Ted Ainsworth has always worked at his family’s ice cream business in the quiet Lancashire town of St Luke’s-on-Sea.

He doesn’t even like ice cream, though he’s never told his parents that. When Ted’s husband suddenly leaves him, the bottom falls out of his world.

But what if this could be an opportunity to put what he wants first? This could be the chance to finally follow his secret dream: something Ted has never told anyone …

It’s not long before the reader learns the nature of Ted’s dream but although the destination may be clear, it’s the journey that Ted goes on to reach it that is at the heart of the book. It’s a journey the author makes us want to accompany Ted on as he battles with the low self-esteem resulting from being dumped, quite out of the blue, by Giles, his partner of twenty years, and the responsibility he feels towards his parents to be part of the family business, famous for its ice cream. It’s a feeling partly born out of gratitude for his parents’ wholehearted acceptance of his sexuality.

I confess Ted’s dream took me into a world I knew little about, not being familar with the TV programme he and his best friend Denise enjoy watching over a glass (or four) of ‘seccy’.  In this respect I was in a similar position to Oskar, a young Polish man, who is on his own personal journey. The author has a real knack for creating memorable characters and I absolutely adored Oskar.  For instance, I loved that, in an effort to improve his English, he learns a new word every day including some peculiar to Lancashire. There’s also a tender moment involving him at the end of the book that provoked the same reaction in me as does that scene at the end of the film, The Railway Children.

Denise has her own experience of toxic relationships but is an instantly enthusiastic supporter of Ted’s dream offering much needed emotional and practical assistance to help him achieve it. Initially I thought Stanley, an older gay man with a love of wearing pink and listening to Barbra Streisand, was a bit of a stereotype but in fact what he tells Ted about his experiences of being gay in the 1950s at a time when homosexuality was illegal acts as a serious reminder of what a long fight it has been to gain acceptance. Oskar’s story also highlights the homophobia that some gay people still face today.

I liked how we see Ted grow in confidence, learn to stand up for himself and reject taking the easy way out when it is offered. He has a dream and this time he’s not going to let anyone stop him achieving it, not even that inner voice that tells him maybe he’s just not good enough. As it turns out, he’s a natural.

Matt Cain is an author, a leading commentator on LGBT+ issues, and a former journalist.

He is currently a presenter for Virgin Radio Pride UK, was Channel 4’s first Culture Editor, Editor-In-Chief of Attitude magazine, and has judged the Costa Prize, the Polari Prize and the South Bank Sky Arts Awards. He won Diversity in Media’s Journalist Of the Year award in 2017 and is an ambassador for Manchester Pride and the Albert Kennedy Trust, plus a patron of LGBT+ History Month. Born in Bury and brought up in Bolton, he now lives in London. (Bio: Publisher author page/Photo: Twitter profile)