A child waits for the tooth fairy; a mother spends a night watching a recording of the previous night; two women face the ghosts that haunted their grandmothers. The nights in these ten stories are thick and substantial, ambiguous and alluring.

Eerie, magical, hushed and surprisingly alive, this anthology shows the night as a place where connections are made and daylit lives can be changed.

Night-Time Stories is The Emma Press’ first short story anthology. In her introduction to the book, editor Yen-Yen Lu writes that her aim was ‘to find stories that capture the strangeness and subtle magic’ of the night. I think she has definitely succeeded. The stories in this anthology are night-time stories rather than bedtime stories ranging from – to quote Yen-Yen Lu once again – ‘the intense and surreal to wonderfully mundane’.

As imagined by the contributors to the collection the night is a time for dreams (as in ‘Dream Lovers’), a time to reflect, a time for encounters of various kinds or a time to work whilst others are sleeping. The stories vary in length – from a paragraph (as in ‘Dream Boats’ by Jane Roberts) to several pages. They also differ in style and in atmosphere. For example, there is an intense eroticism to ‘(hippocampus paradoxus)’ by Valentine Carter.

There’s an element of fantasy but also whimsical humour in ‘Kikomora’ by Sofija Ana Zovko in which a mischievous creature a woman’s late grandmother believed lived behind her stove appears to wreak havoc on a night-time outing. Perhaps the creature wasn’t merely a product of her grandmother’s imagination after all?  I particularly enjoyed ‘Sleeping in Shifts’ by Winifred Mok in which a couple’s work patterns mean their timelines cross only briefly ‘like a lunar eclipse’ and what is dinner for one is breakfast for the other.

I also liked ‘Whose Lounge?’ by Leanne Radojkovich in which a mother sets out to answer her daughter’s question, ‘What happens when no-one is in the lounge?’ with unexpected results. Similarly, ‘Even This Helps’ by Zoë Wells explores the notion that, although many of us may be asleep at night-time, it does not mean everything in the world is still or silent. Unable to sleep, a woman heads to a 24-hour supermarket at 3am, a time when ‘only the elements are in motion’. She observes the clouds ‘shuffle quietly across the cosmos’ and hears ‘the low hum of the universe’. And, as many of the stories illustrate, the night is never completely dark. There is the light from the moon, the headlights of a passing car or the distant glow of a city that never sleeps.

I love it when a piece of writing makes me consider something I’d never thought of before. In this case, it’s that there are some things that only take place at night, such as the times of the year when the clocks go forward or back. In ‘Daylight Saving Time’ by Rebecca Rouillard, a young woman gets the feeling she is travelling back in time when she lives through the hour between 1am and 2am for a second time.

Night-Time Stories is an absorbing collection of skilfully crafted, often thought-provoking stories. I considered scheduling this review to be published at midnight but of course it’s always night-time somewhere in the world.

I received a digital review copy courtesy of The Emma Press. If my review has piqued your interest in the book and you’d like to find out more, you can register for the online book launch on 2nd December here.

Try something similar: The Wooden Hill by Jamie Guiney 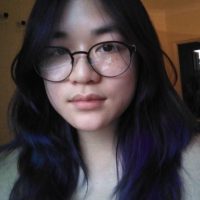 Yen-Yen Lu is a freelance editor and writer. Her short stories have been published in online zines and the anthology In Which Dragons Are Real But (Fincham Press, 2018). As an editor, she is passionate about promoting underrepresented voices in independent publishing. She studied Creative Writing at the University of Roehampton. Her favourite things about the night-time are the lack of crowds, and sleeping.

Valentine Carter has short fiction published by The Fiction Pool, Bandit Fiction, In Yer Ear and The Mechanics’ Institute Review (Issue 15 and Issue 16), and poetry published by Perverse and Visual Verse. Her debut novel, These Great Athenians, published by Twenty Seven, has been shortlisted for the Polari First Book Prize 2022. She is studying for a PhD at Birkbeck, University of London

John Kitchen was a primary headteacher. After retirement he took a chance and signed up for a series of poetry workshops. He discovered he could write. It was life changing. Now he enjoys writing poems, plays, short stories; sharing these with a wide range of audiences; and the great thrill of seeing his work in print.

Winifred Mok is a filmmaker and podcaster (Kin: Fallen Star, Project FIA goes PC) with a passion for stories, books and site-specific theatre. She studied English Literature and Theatre Arts at the University of Birmingham. She likes exploring the spaces of language, culture and identity, and spends most of her time reading, learning, making, and wondering.

Leanne Radojkovich is the author of short story collections Hailman (2021) and First fox (2017), both published by The Emma Press. Recently her stories have appeared in Best Small Fictions 2021, Short Fiction Journal, Landfall and takahē. She holds a Master of Creative Writing (First Class Honours) from AUT Auckland University of Technology. Leanne has Dalmatian heritage and was born in Aotearoa New Zealand. She now lives in Tāmaki Makaurau Auckland where she works as a librarian. ‘Whose lounge?’ was first published in the journal Firewords Quarterly (Issue 5, 2015).

Angela Readman lives in Northumberland. Her stories have won the Mslexia competition, the Costa Story Award and the New Flash Fiction Review Prize. Her collection Don’t Try This at Home was shortlisted in The Edge Hill Prize, and won The Rubery Book Award. In 2022 her second collection The Girls are Pretty Crocodiles & Other Fairy Tales was released. She also writes poetry. Her latest collection Bunny Girls is out with Nine Arches in November 2022.

Rebecca Rouillard has a Creative Writing degree from Birkbeck, University of London, and was the Managing Editor of the Birkbeck Writers’ Hub for four years. Her writing has appeared in various online and print anthologies, including Watermarks: Writing by Lido Lovers and Wild Swimmers (The Frogmore Press, 2017), Dragons of the Prime: An Anthology of Poems about Dinosaurs (The Emma Press, 2019), and 100 Voices (Unbound, 2022) She was the winner of the 2017 Mslexia Novel Competition and works as a school librarian in South-West London.

Miyuki Tatsuma’s writing has been published in digital and physical anthologies such as the PAST, PRESENT, FUTURE anthology by Forest Publications (Edinburgh), and Bounds Green Book Writers’ Lockdown Lit. Imagination in Isolation (London). She grew up in Kraków, Poland, in a Japanese-Polish-Italian household. Since moving to the UK in 2021, she has occupied a realm between four cultures – an existential status which greatly informs not just her writing but also her personal ontology. Though she had written in prose since age ten, one fateful day she woke up and has only created poetry since.

Zoë Wells is a writer, poet and translator from Geneva, Switzerland, currently based in Manchester, UK. Her writing has been featured in a number of publications, including STORGY, Poetry Wales, Bandit Fiction, Hypertrophic Press and Ink, Sweat and Tears. She has previously been longlisted for the BBC National Short Story Award, the White Review Short Story Prize, and the Bridport Prize. She is currently drafting an AI-based grief fiction novel, as well as editing a collection of translated poems from the French-language writer Renée Vivien.

Sofija Ana Zovko is a writer, editor, and translator from Zagreb, Croatia. She holds an MSt in Creative Writing from the University of Oxford, focusing on depictions of the Balkans. Her work can be found in Ash, Flash Fiction Magazine and harana poetry, and two of her stories were longlisted for the 2021 Mslexia Short Story Competition.