Today’s guest on What Cathy Read Next is author William Burton McCormick. You can read my review of his latest book, House of Tigers, below. But first let’s see what questions William drew at random when he took part in my “Lucky Dip Q&A” by picking five numbers between 1 and 30.

Q. If you could write a sequel or prequel to any book (excluding your own) what would you choose?
A. I’d like to write a prequel to Moby Dick and see how Captain Ahab lost that leg to the White Whale.  And how it drove him mad.

Q. How would you summarise your book in the form of a haiku?
A. Dreadful summertime
Siberia, mosquito swarms
Finding the killer

Q. Do you always know how your book will end when you start writing?
A. I changed the ending of my debut novel, Lenin’s Harem, but in the last three I’ve known from the start.  I try to adhere to the advice R.L. Stine gave at a thriller writers’ conference: “Get a good title and a good ending and fill in from there.”

Q. What is your favourite opening line from one of your books?
A. I’d say it was from the current book, House of Tigers. “The mosquito swarms, black, undulating, and infinite, stretched horizon to horizon over the Siberian wilderness.”

Q. What is the longest time you’ve spent writing a book – and the shortest?
A. My debut novel, Lenin’s Harem, took two and a half years from all the research required, plus a good eight months to re-draft before submitting to publishers. The shortest was House of Tigers which took about two months (written during the tail end of the pandemic when there was nowhere to go).

Q. How did you choose your numbers?
A. They represent digits used in certain passwords.  Hackers, get to work!

I love the answer to that last question and well done, William, for tackling the second one! 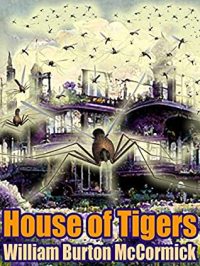 Ilya Dudnyk, a corrupt but romantic Russian police inspector, is trapped inside his oligarch employer’s Siberian mansion with an unknown killer, a duplicitous Latvian journalist chained to his arm, and an apocalyptic insect plague raging for hundreds of kilometres beyond the smoke barriers and barricaded windows.

Can Ilya track down the killer before he is the next victim? Or will the endless swarms find a way inside and all are consumed by a hundred trillion ravenous, blood-sucking mosquitoes?

Find House of Tigers on Goodreads

Purchase link
Amazon UK
Link provided for convenience only, not as part of an affiliate programme

As I discovered when I read his previous book, A Stranger from the Storm, you can rely on the author to come up with something just a little bit different. I think we can safely say a story involving a group of people confined in a Siberian mansion with a swarm of deadly blood-sucking insects outside satisfies  that description.

The members of the Aristov family are gathered to hear about the will of their father, the wealthy but ailing Konstantin who has made part of his fortune from the animals who give the book its title. Much in the manner of Shakespeare’s King Lear, Konstantin is unwilling to divide his empire and has devised a test of loyalty with the winner taking all. ‘Konstantin, the king, was mad. Narcissistic, monomaniacal, paranoid. But still the king.’

What follows is like some macabre game of Cluedo in which the library, billiard room and ballroom of the board game are replaced by monk’s cell, bathhouse and tiger pit. The task of working out what’s going on falls to Ilya Dudnyk, a Russian police inspector who also moonlights as Konstantin’s ‘fixer’.

The shady goings-on are enlivened with moments of humour, such as the teasing banter between Ilya and Latvian journalist, Santa Ezerina (who featured in the author’s story, ‘Demon in the Depths‘). The latter will go to any lengths to get a story.

House of Tigers is a locked room mystery with nods to everything from Daphne du Maurier’s story The Birds to the film Night of the Living Dead, but still has classic elements such as a denoument which sees all the suspects gathered together in the library for the final reveal. An epilogue provides a ‘what happened next’ with the surviving characters; it’s a mixture of just desserts and lucky breaks.

House of Tigers is a quirky and highly entertaining mystery.

Try something similar: The Masque of the Red Death by Edgar Allen Poe

William Burton McCormick is a Shamus, Thriller, Derringer, and Claymore awards finalist.  His Santa Ezerina novella ‘Demon in the Depths’ was voted second place in Ellery Queen’s Mystery Magazine’s 2021 Readers Poll. He is the author of the thrillers A Stranger from the Storm and KGB Banker, and the historical novel of the Baltic Republics, Lenin’s Harim. William has lived in seven countries including the Russian Federation, the setting of House of Tigers.