Welcome to today’s stop on the blog tour for The Santa Killer by Ross Greenwood. My thanks to Rachel at Rachel’s Random Resources for inviting me to take part in the tour and to Boldwood Books for my digital review copy via NetGalley. Do check out the posts by my tour buddies for today, Jen at Jen Med’s Book Reviews and over on Instagram, Deb at Debs Book Reviews. 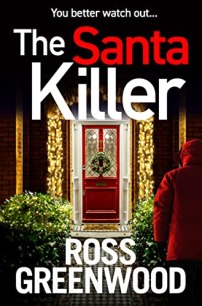 The Santa Killer is coming to town…

One night less than two weeks before Christmas, a single mother is violently assaulted. It’s a brutal crime at the time of year when there should be goodwill to all. When DI Barton begins his investigation, he’s surprised to find the victim is a woman with nothing to hide and no reason for anyone to hurt her.

A few days later, the mother of the woman attacked rings the police station. Her granddaughter has drawn a shocking picture. It seems she was looking out of the window when her mother was attacked. And when her grandmother asks the young girl who the person with the weapon is, she whispers two words. Bad Santa.

The rumours start spreading, and none of the city’s women feel safe – which one of them will be next

He’s got a list. It’s quite precise. It won’t matter even if you’re nice.

Find The Santa Killer on Goodreads

Purchase The Santa Killer
Amazon UK
Link provided for convenience only, not as part of an affiliate programme

I only discovered the DI Barton series when I joined the blog tour for the previous book, The Fire Killer, which was book five. Now we’re at book six and what may be the last outing for DI Barton although you never know what the New Year might bring. (In fact, the author is embarking on a new crime series set in Norfolk, an extract from which is included at the end of the book.)

As in The Fire Killer, I enjoyed the glimpses into Barton’s home life. It’s his family that keeps him grounded, especially his wife Holly. However, the run-up to Christmas sees him more conscious than ever of the toll his work takes on him, and on them: the long hours, the missed family events, those late night phone calls, the dangerous situations he may be confronted with.

The book’s structure follows the pattern of the previous book opening with a dramatic scene whose relevance will take some time to be come clear. From that point on the story switches between Barton’s investigation into a series of assaults on women by a perpetrator who may have adopted a seasonal disguise but is definitely not the bringer of festive greetings, and the first person narrative of The Santa Killer. We know a few details about their background, witness their actions and the impulses that drive them but we don’t know their identity. But when we find out, that should be it shouldn’t it? Think again.

The Fire Killer took place against the backdrop of the Covid-19 pandemic and the impact that lockdown had on people. The author incorporates a range of social issues into The Santa Killer including mental illness, marital breakdown and financial hardship, the sort of stresses and strains that can bring out the worst in people but perhaps should also be treated with compassion. Through Barton’s eyes we also get an insight into the pressures on the criminal justice system and its inability always to deal appropriately with vulnerable individuals.

Barton adopts his customary painstaking approach to the investigation, forced to carry out much of the legwork himself because there are simply no other resources available. However, when he is able to use some of his old team, he’s great at encouraging ideas, welcoming thoughts about different possible angles and, of course, recognising the value of the hunch. ‘Good coppers had hunches. That was why they were the best. Hunches didn’t help prosecutions, but they kept you in the game. They kept you focused. Any break might be a small one. You needed to be ready and looking.’

Talking of being ready and looking, as I read The Santa Killer I carefully made a list of possible suspects – it turned out to be a long list – but, no doubt to the author’s delight, I had to cross through each and every name on it. Yep, he fooled me with an ingenious addition to the narrative.

The Santa Killer is a cleverly constructed, pacy and engrossing crime mystery. I shall be sad to say farewell to DI Barton and his team – especially the banter between Barton and Sergeant Zander – but I’ll look forward to reading the author’s new series, this time starting from the beginning.

Try something similar: Requiem in La Rossa by Tom Benjamin

Ross Greenwood is the bestselling author of over ten crime thrillers. Before becoming a full-time writer he was most recently a prison officer and so worked everyday with murderers, rapists and thieves for four years. He lives in Peterborough.

One thought on “#BlogTour #BookReview The Santa Killer by Ross Greenwood”