A private jet plunges into the sea with only two survivors: the young son of the family who chartered the plane – now heir to a TV mogul’s fortune – and a man who only chanced to be on board at all, down-on- his-luck artist Scott Burroughs, the hero who saved the boy’s life.

But nothing is simple when big money is concerned and even bigger reputations are at stake. In the media storm that follows questions start to be asked. Is Scott Burroughs as innocent as he seems?

Find Before the Fall on Goodreads 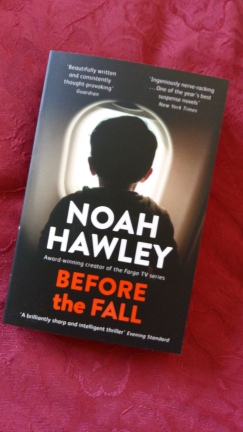 In his own words Scott Burroughs is ‘a single man approaching fifty, a notorious womanizer and recovering alcoholic, a struggling artist who’s never been able to keep a single lasting relationship. He is nobody’s role model. Nobody’s hero’. Yet he finds himself cast in the role of hero when he saves four-year-old JJ Bateman from the plane crash which killed everyone else onboard. The rescue is a remarkable demonstration of strength and endurance, described in the most thrilling way.

‘Everyone is from someplace. We all have stories, our lives unfolding along crooked lines, colliding in unexpected ways.’ This observation is reflected in the structure of the book with Scott’s experiences following the rescue and the media interest it creates, and the investigation into the cause of the plane crash, being interspersed with the back stories of the other passengers on the plane.  Within these stories are possible circumstances that might have led to the crash. Or was it simple mechanical failure?

There’s David Bateman, father of JJ, and the brains behind the ALC News TV channel whose agenda is not so much to report the news as to make it, expounding a point of view and a quite extreme one at that (think Fox News).  The station’s shock-jock presenter, Bill Milligan, who will stop at nothing to unearth a story, risks involving the station in criminal activity which might result in Bateman’s resignation. Added to this Bateman’s family have received threats resulting in them needing 24/7 armed security. Another passenger on the plane, financier Ben Kipling has just learned he is facing an indictment for money laundering, an activity which has seen him involved with some very shady organisations including some possibly engaged in terrorism. And you probably wouldn’t want members of your flight crew engaging in drink and drug fuelled parties during stopovers.

An intriguing element of the book are sections describing Scott’s paintings all of which depict scenes of catastrophe or impending disaster – a train crash, a building collapse, an approaching tornado. These come to play a key role in how Scott is viewed both by the media and those investigating the crash.  From being a hero, he becomes a suspect and the subject of media intrusion during which details of his private life are pored over and twisted to suggest his guilt.  Just how friendly was Scott with Bateman’s wife Maggie and what is behind his continuing interest in young JJ now being looked after by the boy’s aunt, executor of her brother’s multi-million dollar estate? And isn’t it the case that his paintings will be worth much more now than they would have been before?

I confess when the reason behind the crash is finally revealed, following some last minute disclosure of information, it was the least interesting of the possible scenarios and felt a bit of a letdown. Having said that, the brisk and breezy style of the writing, and the fast pace of the book kept me turning the pages. It would make a great beach read or to while away the hours on a long journey, possibly just not if it’s on a plane.

I received a proof copy courtesy of Hodder & Stoughton. Before the Fall is the fourth book on my list for the 20 Books of Summer 2022 reading challenge. And, yes, I am aware the end of August is fast approaching…

Try something similar: The Quiet People by Paul Cleave 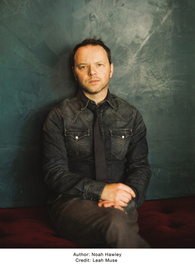 Noah Hawley is the Emmy award-winning creator of the hit TV series Fargo, and a Golden Globe, PEN, Critics’ Choice and Peabody Award-winning author, screenwriter, and producer. He has published four novels and penned the script for the feature film Lies and Alibis. He created, executive produced, and served as showrunner for ABC’s My Generation and The Unusuals and was a writer and producer on the hit series Bones.