Welcome to today’s stop on the blog tour for Every Shade of Happy by Phyllida Shrimpton. My thanks to Amy at Head of Zeus for inviting me to take part in the tour and for my digital review copy via NetGalley. Do check out the post by my tour buddy for today, Frankie at Chicks, Rogues and Scandals.

Algernon is at the end of his life.
His granddaughter is at the start of hers.
But they have more in common than they think…

Every day of Algernon’s 97 years has been broken up into an ordered routine. That’s how it’s been since the war, and he’s not about to change now.

Until his 15-year-old granddaughter arrives on his doorstep, turning Algernon’s black-and-white life upside down. Everything from Anna’s clothes to the way she sits glued to her phone is strange to Algernon, and he’s not sure he likes it.

But as the weeks pass, Algernon is surprised to discover they have something in common after all – Anna is lonely, just like him. Can Algernon change the habits of a lifetime to bring the colour back into Anna’s world?

Find Every Shade of Happy on Goodreads

Okay, I’m going to cut to the chase and say I was Team Algernon from the outset. Yes, he may be a little grumpy, rather lackadaisical about washing his smalls and definitely set in his ways but that’s just his way of coping with the world, particularly since the death of his wife, Evie. He feels she’s with him in spirit though, giving him a nudge when needed or the occasional gentle rebuke just as she did when she was alive. I loved everything about Algernon and, although he may be out of touch with modern technology – he favours a map over an app – perhaps he’s not wrong when he asserts a letter, a telephone call or a face-to-face meeting means more than an email, text or ‘like’ on an Instagram post.

It took me a little longer to warm to Anna’s mother, Helene. Initially, she comes across as someone who lurches from one crisis to another. Even Anna admits her mother is impulsive and clumsy, charging into things without due thought. It’s not Helene’s fault that she and Anna have ended up homeless but her precarious financial situation is the reason they’ve had to resort to living with Algernon. However, I came to admire the way Helene gradually gains control of her life, eventually finding something she’s really good at; as even Algernon is forced to admit.

Anna’s love of colour is about more than just wearing clothes of every hue or creating body art, it’s her form of self-expression. When forced to don a drab school uniform, she feels she’s no longer Anna, just a dull, grey version of herself. It’s one of the things, along with the upheaval of a new home, new school and having to leave her friends behind, that makes her retreat into herself, with only Gary her cactus for company. At this point I must mention one of my other favourite characters in the book – Jacob, the eldest son of Algernon’s neighbours – who literally catapults himself into the story variously performing the role of joker, protector, counsellor, delivery driver, cream tea devourer and much more besides. I also loved Jacob’s quirky sense of humour and his endless patience towards Algernon.

Dismiss any preconceived notion that Every Shade of Happy is the simple story of young Anna melting the heart of her grumpy old granddad because it’s much more nuanced than that. Although Anna and Algernon may appear to be running on parallel lines and that never the twain shall meet, in fact they have more in common than either of them thought. They just need a bit of guidance and encouragement to find out what it is. My first weepy moment was when an additional armchair was ordered – yes, really – and there were plenty of times after that I found myself reaching for the tissues.

There is a real warmth to the story perhaps partly because, as the author reveals in the Acknowledgments, the book is an ‘ode’ to her father whose wartime experiences were similar to Algernon’s, as was his reticence to talk about them.

Every Shade of Happy is a wonderfully affecting story told with warmth and wit.

Try something similar: The Reading List by Sara Nisha Adams 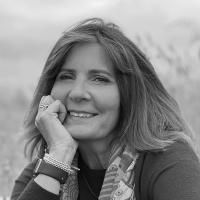 Phyllida Shrimpton obtained a postgraduate degree in Human Resource Management, a career choice which was almost as disastrous as her cooking. Thankfully her love of books and writing led her to a new career as an author. Her young adult novel Sunflowers in February won the Red Book Award for YA Fiction in 2019. Having lived in London, The Netherlands and the Cotswolds with her husband, daughter, giant Saint Bernard and grumpy old terrier, she now lives on the Essex Coast in a place she likes to describe as being where the river meets the sea. Every Shade of Happy is her first adult novel.