Welcome to today’s stop on the blog tour for Young Women by Jessica Moor. My thanks to Anne at Random Things Tours for inviting me to take part in the tour and to Zaffre for my digital review copy via NetGalley.  Do check out the post by my tour buddy for today, Amanda at The Butler Did It. 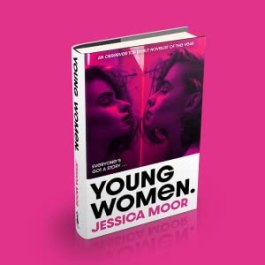 When Emily meets the enigmatic and dazzling actress Tamsin, her life changes. Drawn into Tamsin’s world of Soho living, boozy dinners, and cocktails at impossibly expensive bars, Emily’s life shifts from black and white to technicolour and the two women become inseparable.

Tamsin is the friend Emily has always longed for; beautiful, fun, intelligent and mysterious and soon Emily is neglecting her previous life – her work assisting vulnerable women, her old friend Lucy – to bask in her glow.  But when a bombshell news article about a decades-old sexual assault case breaks, Emily realises that Tamsin has been hiding a secret about her own past. Something that threatens to unravel everything…

For the first portion of Young Women I thought I knew exactly where the book was going. Tamsin is the manipulative young woman who wheedles her way into Emily’s life, adjusting her behaviour to be exactly what she thinks Emily needs; a life that’s much more exciting and daring than the one Emily is currently living – a diet of meal deals and a flatmate she hardly ever speaks to. And Tamsin’s an actress so she’ll have no problem putting on a performance and pulling the wool over Emily’s eyes until her true motives are revealed. Except it’s not as simple as that.

Everything changes in the second part of the book when the story becomes much more nuanced, as do the characters.  Gradually we learn that Tamsin and Emily, and Emily’s friend Lucy, have experiences in common none of which have resulted in action being taken against the perpetrators. (It may be a concidence but in each case where they’ve reported what they’ve suffered it was to a woman yet no action was taken.)  A neat counterpoint to this is Renee, Emily’s boss at the Women’s Advocacy Group, who is relentless in her support of women who have suffered sexual violence.

In a turnaround, it’s Emily who sees herself taking the dominant role in her relationship with Tamsin. Here’s her chance to demonstrate her activism by supporting Tamsin in calling out the actions of a powerful and influential figure in the film industry. Emily pictures the two of them being seen as a ‘force to be reckoned with’ taking part in joint interviews as the story reaches the press. She even fantasises about quitting her job to make time for it all. (Ironically, Emily’s has been careless in her handling of an actual case she’s been assigned at work.)  Emily is sure she knows exactly how Tamsin will respond, congratulating herself on ‘getting good at writing her’ so she’s disappointed at Tamsin’s reaction. She’s even more shocked at Tamsin’s subsequent actions, although her own are not exactly laudable. What happens next explores issues of consent and the extent to which there is a responsibility to speak out. Does failing to do so somehow make you complicit?

Although I had some reservations about Emily’s risk-taking behaviour towards the end of the book, Young Women raises some interesting moral questions, bringing to mind cases that have made the headlines in recent years. 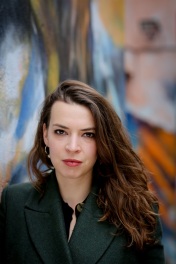 Jessica Moor studied English at Cambridge before completing a Creative Writing MA at Manchester University. Her debut novel Keeper was published in 2020 to rave reviews and critical acclaim. Jessica Moor was selected as one of the Observer‘s debut novelists of 2020, and Keeper was chosen by the Sunday Times, Independent and Cosmopolitan as one of their top debuts of the year. Keeper was nominated for the Desmond Elliott Prize and an Edgar Award. Young Women is her second novel.