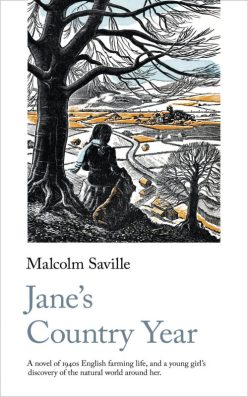 ‘At last she reached the brow of the hill … now the country opened out below her and she looked down into a wide and lovely valley … Still patched with snow the little fields spread like a carpet below her and here and there a farmhouse with barns and golden ricks was clearly seen. Across the plain ran, straight as a ruler, a railway line and she saw a toy train puffing and crawling across the picture.’

Malcolm Saville’s classic novel is about eleven-year old Jane’s discovery of nature and country life during a year spent convalescing on her uncle’s farm, after having been dangerously ill in post-war London. This deeply-felt novel was written while Saville was extending his range as a writer, alongside his very successful Lone Pine adventure series, and nature anthologies for children.

Inspired by the experiences of Saville’s own god-daughter, this marvellous novel is full of the wonder of discovery, as well the happiness of regaining health, making friends, and learning to love the natural world. The novel is also a record of rural England eighty years ago, written by one of the great twentieth century English nature writers.

Pre-order/Purchase links
Bookshop.org
Disclosure: If you buy a book via the above link, I may earn a commission from Bookshop.org, whose fees support independent bookshops

Handheld Press has built a deserved reputation for publishing new editions of forgotten fiction and books by lost authors. Jane’s Country Year is no exception being the first new edition of the book since it was first published in 1946.

As with all books in the Handheld Classics series, it has a fascinating introduction, in this case by Hazel Sheeky Bird of the University of Newcastle. As well as providing background information about Malcolm Saville and his other works, Hazel Sheeky Bird explores some of the themes of the book and puts it into historical context. She notes the book’s ‘unsentimental attitude to the natural world’ and its place in what has been described as ‘didactic fiction’, in other words fiction intended to educate as well as entertain.  The book also contains useful notes by Handheld’s founder and commissioning editor, Kate Macdonald, in which she explains some terms in the book that may be unfamiliar to modern readers. My favourites were ‘warm knickers’ and ‘licked his pencil’. 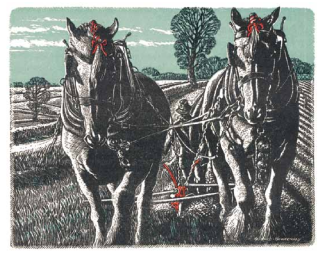 From the moment Jane arrives at Moor End, the farm owned by her Uncle William and Aunt Kate, she notices the differences between town and country life: the lack of traffic noise, the unimpeded view from her bedroom window, the sound of bird song and the daily rhythm of farming life. As time goes by she learns more about animal husbandry and how food is produced. As she discovers, the operation of Moor End Farm still relies largely on manual labour, horse-drawn ploughs and basic farm machinery. The changing seasons are marked by tasks in the farming calendar – sowing, threshing, harvesting – with Jane enthusiastically joining in some of these tasks.

She is also introduced to the fauna and flora of the countryside surrounding the farm by Robert, the son of the rector of the local church. Together, the friends explore the woods, fields and country lanes spotting birds, insects, butterflies and woodland animals as well as identifying the wildflowers that grow in the fields and hedgerows.  Jane recounts some of these finds in the touching ‘Moor End’ letters she writes to her parents.

The author clearly has a passion for the natural world and a desire to pass on that enthusiasm to his readers. There are some wonderfully lyrical descriptions of the countryside and nature. ‘Her uncle’s cornfields blazed with scarlet poppies and a handsome lime tree in the rectory garden sang with the music of myriads of bees seeking the honey of the little flowers.’

The healing power of nature and the outdoors is another theme. Jane arrives at Moor End a pale, sickly child but a spring and summer spent out in the open air, as well as Aunt Kate’s simple but hearty meals and an abundant supply of tea, restores her to health, so much so that her parents hardly recognise her when they pay a visit. One can perhaps sympathize with her mother’s over-protectiveness towards Jane having nursed her through a serious illness, however, I’m sure I’m not the only reader to give a little cheer as Jane takes part in a race at the Bank Holiday fair on the village green. 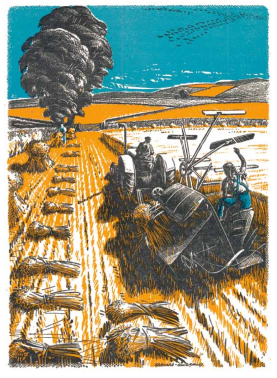 The book has beautiful full colour illustrations by Bernard Bowerman reproduced from the original edition. I think they would make a wonderful calendar.

In her introduction, Hazel Sheeky Bird notes, ‘Like many authors of genre fiction, Saville has always occupied an uneasy position – beloved by his readers, but frequently criticised by those who were not his intended audience’.  Although written for younger readers, I believe Jane’s Country Year will appeal to anyone interested in rural life in the 1940s, the countryside or the natural world. It also ties in with present days concerns about the environment, sustainability and the preservation of the countryside. As Uncle William remarks at one point, ‘And so you see Janey how ’tis that everything that came from the soil goes back into it at last’. I thought it was utterly charming.

If my review has made you interested in learning more about the book and its author, you can obtain a free ticket for the online book launch on 17th January 2022 here.

My thanks to Kate at Handheld Press for my advance review copy.