The year is 1900. The port city of Odessa on the Black Sea is being terrorized by a brutal killer called the Specter. With five people already dead, the murderer promises more.

One family, the Karadopoulinas, run a boarding house. Sisters Tasia and Eleni feel certain the killer is a scarred, shambling Londoner who took lodging with them one night during a thunderstorm. Furtive and threatening, Henry Humble, stalks Odessa’s labyrinth of interlocking courtyards and foggy docks at night, armed with weapons and skeleton keys. As the body count rises, so do the questions…

Who is the mysterious figure haunting the catacombs below the streets of Odessa? Why won’t Eleni’s police constable sweetheart investigate? Who will be the next to die?

Find A Stranger From the Storm on Goodreads

Purchase links
Amazon UK
Link provided for convenience only, not as part of an affiliate programme

I was first introduced to the writing of William Burton McCormick when I read and reviewed the CWA Anthology of Short Stories: Mystery Tour back in 2017, to which William contributed a story. Therefore I was delighted when he offered me the opportunity to read his latest book, A Stranger from the Storm, which is published today (4th November 2021).

Odessa proves an ideal setting for a historical mystery with its dark streets and network of tunnels that lie beneath the city. Sisters, Eleni and Tasia, make engaging central characters. Eleni is impetuous and something of a risk-taker whilst Tasia is thoughtful and more inclined to think things through before acting, although that doesn’t stop both of them getting into some scrapes. I enjoyed the light-hearted banter between the sisters. For example, this exchange when a telegram arrives addressed to their mysterious guest. ‘”Don’t you dare open that envelope, Eleni.” She opened the envelope. “Eleni, don’t you dare read that telegram!” She read it.’

There are some chilling and dramatic scenes as the sisters close in on the murderer – those tunnels again – but there are also moments of humour. For instance, when the search for an item they are convinced is hidden in a particular place proves unproductive, Tasia remarks “I hate red herrings” and Eleni replies, “I prefer boiled cod”.

Talking of red herrings, there are plenty dotted throughout the book and the author also creates a number of false trails in an attempt to outwit the reader. If you work out the person behind the murders before the final reveal you must definitely have been taking notes.

A Stranger from the Storm is a perfect one sitting read, preferably on a dark winte night when you’re in the mood for a chilling tale. Do check the doors and windows are locked first however – oh, and you might want to look under that rug.

Try something similar: Betty Church and the Suffolk Vampire by M.R.C. Kasasian

William Burton McCormick was born in Maryland and grew up in Nevada. He has lived in seven countries including Latvia and Russia where he researched and wrote his first novel Lenin’s Harem.

William graduated from Brown University with degrees in Ancient Studies and Computer Science and earned an MA in Novel Writing from the University of Manchester. He has won awards in the production of computer games and educational software, co-owned a company to reduce junk e-mail, and worked as an executive recruiter in the Washington D.C. area. He also studied at Lomonosov Moscow State University. 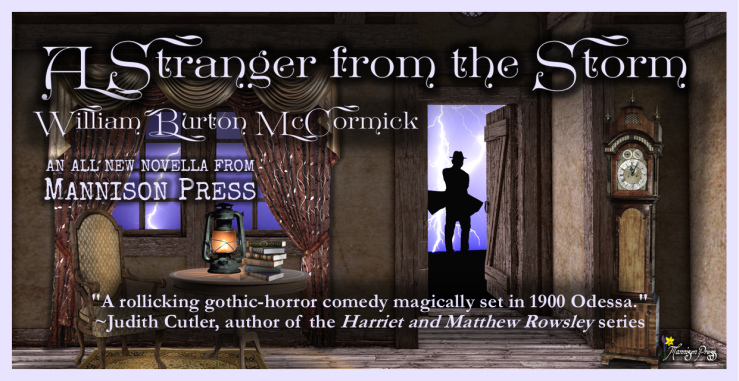