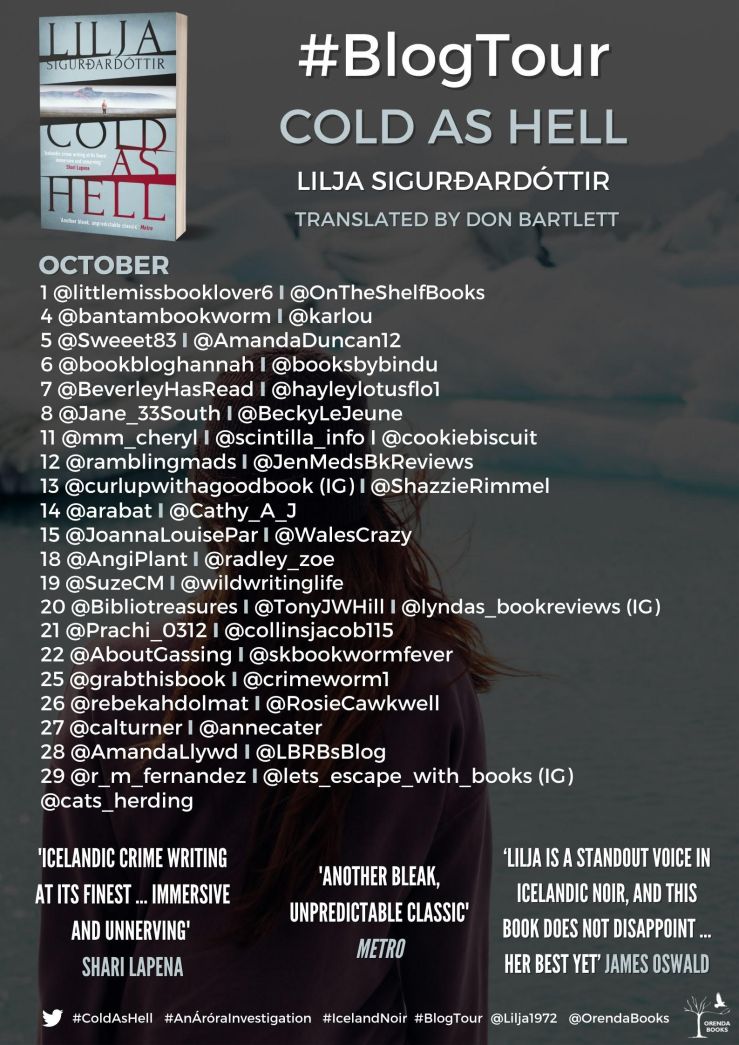 Welcome to today’s stop on the blog tour for Cold As Hell by Lilja Sigurðardóttir, translated by Don Bartlett. My thanks to Anne at Random Things Tours for inviting me to take part in the tour and to Orenda Books for my digital review copy. Cold As Hell is available now as an ebook and will be published in paperback on 28th October 2021.

Icelandic sisters Áróra and Ísafold live in different countries and aren’t on speaking terms, but when their mother loses contact with Ísafold, Áróra reluctantly returns to Iceland to find her sister. But she soon realizes that her sister isn’t avoiding her… she has disappeared, without trace.

As she confronts Ísafold’s abusive, drug-dealing boyfriend Björn, and begins to probe her sister’s reclusive neighbours – who have their own reasons for staying out of sight – Áróra is led into an ever-darker web of intrigue and manipulation.

Baffled by the conflicting details of her sister’s life, and blinded by the shiveringly bright midnight sun of the Icelandic summer, Áróra enlists the help of police officer Daníel, as she tries to track her sister’s movements, and begins to tail Björn – but she isn’t the only one watching…

Find Cold as Hell on Goodreads

Opening with a chilling prologue, the book alternates between the point of view of Áróra and several other characters, some of whom this reader immediately suspected were not who they claimed to be and whose true nature was probably quite different from that presented. Ah, but of course Lilja Sigurðardóttir is too clever and skilful a writer not to trip the reader up; she certainly did this one! The fact that events unfold over the space of a few weeks and the chapters are short kept the pace high and led to that ‘just one more chapter’ feeling, although this is a book that could easily be read in one sitting.

In Áróra the author hasn’t given us a straightforward heroine. She’s a complex character who has come to resent the frequent need to rescue her sister from situations Áróra feels are of her sister’s own making. It’s only at the urging of Violet with perhaps a mother’s instinct that the cause of Ísafold’s disappearance is something sinister that persuades Áróra to travel to Iceland in search of answers. Áróra’s occupation as a financial investigator provides the opportunity for the introduction of a subplot which delves into the murky world of financial crime. Finding money which others have tried to hide away is something of a drug for Áróra, who thinks of herself as a kind of ‘avenging angel’. It leads to her taking personal risks which on occasion threaten her safety.  Brought up in Britain but with an Icelandic father, I liked the way we see Áróra having to acclimatise to the more open and trusting Icelandic society whose population is seemingly fuelled largely on coffee!

Áróra is persuaded by her mother to enlist the help of Daníel, a relative by marriage and serving police officer. His involvement opens doors that would otherwise be closed to Áróra and they make an effective team, with hints of the possibility of something more in future.  I liked Daníel as a character even if he does have somewhat of an obsession with maintaining an immaculate lawn!  And I particularly liked his neighbour Lady Gúgúlú, an unlikely combination of drag artist and physicist. As she observes to Daníel, ‘Well, I have many different selves, darling. Just the same as you do. Just like everyone else. Most people only let one of these show.’

The author lays down plenty of false trails that are impossible to resist following and which distract you from what’s really going on. Does everyone get what they deserve? You’ll have to read the book to find out. Cold As Hell is a taut, atmospheric and skilfully crafted crime thriller, and a great  introduction to what promises to be an addictive new series for fans of Icelandic noir.

Icelandic crime-writer Lilja Sigurðardóttir was born in the town of Akranes in 1972 and raised in Mexico, Sweden, Spain and Iceland. An award-winning playwright, Lilja has written four crime novels, with Snare, her English debut shortlisting for the CWA International Dagger and hitting bestseller lists worldwide. Trap soon followed suit, with the third in the trilogy, Cage, winning the Best Icelandic Crime Novel of the Year, and was a Guardian Book of the Year. Lilja’s standalone, Betrayal, was shortlisted for the Glass Key Award for Best Nordic Crime Novel. The film rights have been bought by Palomar Pictures in California. Lilja is also an award-winning screenwriter in her native Iceland. She lives in Reykjavík with her partner