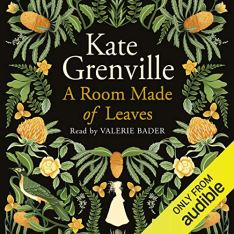 It is 1788. Twenty-one-year-old Elizabeth is hungry for life but, as the ward of a Devon clergyman, knows she has few prospects. When proud, scarred soldier John Macarthur promises her the earth one midsummer’s night, she believes him.

But Elizabeth soon realises she has made a terrible mistake. Her new husband is reckless, tormented, driven by some dark rage at the world. He tells her he is to take up a position as lieutenant in a New South Wales penal colony and she has no choice but to go. Sailing for six months to the far side of the globe with a child growing inside her, she arrives to find Sydney Town a brutal, dusty, hungry place of makeshift shelters, failing crops, scheming and rumours.

All her life she has learned to be obliging, to fold herself up small. Now, in the vast landscapes of an unknown continent, Elizabeth has to discover a strength she never imagined and passions she could never express.

Inspired by the real life of a remarkable woman, this is an extraordinarily rich, beautifully wrought novel of resilience, courage and the mystery of human desire.

Find A Room Made of Leaves on Goodreads

Shortlisted for The Walter Scott Prize for Historical Fiction 2021, A Room Made of Leaves opens with that oft-used literary device, the discovery of a hidden cache of documents. Adopting the guise of editor, Kate Grenville explains how she came into possession of a box containing the hitherto secret memoirs of Elizabeth Macarthur, the wife of one of the most famous and wealthy entrepreneurs of late 18th/early 19th century New South Wales. I’ll confess it had me immediately searching online to find out whether Elizabeth was a real or invented character. As it happens, she did exist in real life.

I listened to the audiobook version narrated by Valerie Bader and was initially daunted when I saw it had 131 chapters. However, most are very short helping to give the impression of diary entries.

Elizabeth Veale grows up in Cornwall, her social and financial position giving her limited options in life. Marriage to soldier John Macarthur initially seems to offer a form of escape but she soon discovers she has shackled herself to a man unable to show tenderness and that she is no nearer to being in control of her destiny. What she does demonstrate is a shrewd insight into John’s character: his love of grandiose schemes, of the ‘long game’, his need to be proved right, his delight in catching other people out, and his sensitivity to any suggestion of insult. Generously, she attributes his behaviour to the traumatic experiences of his youth and a sense of inferiority.

Forced to reveal to Elizabeth the existence of a large debt, Jack announces he has accepted a posting to the penal colony in New South Wales as it comes with promotion. As usual, he’s full of confidence, dismisses reports of troubles in the colony and seems to have no concerns about taking wife and young son half way across the world.

I’ve only read one previous book by Kate Grenville, Sarah Thornhill the final book in her trilogy that started with The Secret River (although I didn’t realize it was part of a trilogy at the time). A theme it shares with A Room Made of Leaves is colonization and the exploitation of the indigenous people. Indeed most of the people Elizabeth encounters regard the indigenous people as ‘savages’, referring to them as ‘our sable brethren’. Only Lieutenant Dawes, a keen astronomer, makes any effort to communicate with them in their own language and understand their customs.

I think your reaction to this book will depend on how much you knew about the real Elizabeth Macarthur before reading it. If, like me, you knew absolutely nothing then your judgment of the book will be based solely on the quality of the writing and the skill with which the story is told. Unfortunately, I found the pace of the book slow at times with scenes of significance recounted only briefly and others, such as Elizabeth’s tea parties (her ‘Antipodean salons’) described in detail. It really only picked up for me towards the end when the reader is finally introduced to the ‘room made of leaves’. And, although I appreciate the author is exploring the line between truth and invention, I continue to find the artificiality of the ‘secret journal’ device unconvincing. Would anyone really keep copies of every letter they sent? Would even the most diligent diarist be able to recall conversations in such detail they could reproduce them verbatim years later?

Readers familiar with the life of Elizabeth Macarthur will be in a better position to judge the ‘playful dance of possibilities between the real and the invented’ described in the book’s blurb. Regrettably, I couldn’t feel the same enthusiasm for the book as the judges of the Walter Scott Prize – which probably means it might well win!

Kate Grenville is one of Australia’s best-known authors. She’s published eight books of fiction and four books about the writing process. Her best-known works are the international best-seller The Secret River, The Idea of Perfection, The Lieutenant and Lilian’s Story. Her novels have won many awards both in Australia and the UK, several have been made into major feature films, and all have been translated into European and Asian languages. (Photo credit: Publisher author page)