Welcome to today’s stop on the blog tour for The Assistant by Kjell Ola Dahl, translated by Don Bartlett. My thanks to Anne at Random Things Tours for inviting me to participate in the tour and to Orenda Books for my digital review copy. 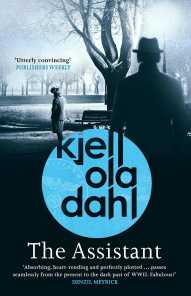 Oslo, 1938. War is in the air and Europe is in turmoil. Hitler’s Germany has occupied Austria and is threatening Czechoslovakia; there’s a civil war in Spain and Mussolini reigns in Italy.

When a woman turns up at the office of police-turned-private investigator Ludvig Paaske, he and his assistant – his one-time nemesis and former drug-smuggler Jack Rivers – begin a seemingly straightforward investigation into marital infidelity.

But all is not what it seems, and when Jack is accused of murder, the trail leads back to the 1920s, to prohibition-era Norway, to the smugglers, sex workers and hoodlums of his criminal past … and an extraordinary secret.

Find The Assistant on Goodreads

The Assistant switches back and forth between two timelines, one set in 1924/25 (when Oslo was still known as Kristiania) and the other in 1938. The leading characters, Ludvig Paaske and Jack Rivers, appear in both timelines, as do other individuals but only gradually does it become clear how they and the events described interact. At one point, on returning to a house he visited fourteen years earlier, Jack observes how ‘time can go round in circles’ and I had much the same feeling. Thankfully, the chapter headings clearly identify which of the two timelines the reader is in.

The dictionary defines an assistant as ‘person who assists or gives aid and support; helper, a person who is subordinate to another in rank, function, etc.; one holding a secondary rank in an office or post’. I liked how the author plays with the concept of being an assistant.

When we initially meet Jack Rivers he is working for Arvid Bjerke, the owner of a transport company, driving vehicles carrying goods, including contraband alcohol, to Bjerke’s customers. In other words, Jack is assisting in criminal activity. Moving forward fourteen years, Jack is working as assistant to Ludvig Paaske, a former police office who now runs a private investigation business. Ludvig has hired Jack despite his criminal record so you could say Paaske is assisting Jack to go straight.

If only the relationship between the two men was as straightforward as that. For example, does the role of assistant imply a degree of loyalty to the person you are assisting? From Paaske’s point of view it seems clear it does. ‘An assistant means outgoings, but he has to be able to repay investment, to add value.’  But if this is the case, should there be an expectation of the same in return?

Ludwig and Jack are both flawed characters who have done bad things and made poor decisions in the past (although many of the female characters are not much better).  But which of them has damaged their integrity the most as a result?  Can the reader forgive either of them for their past actions?

At one point in the earlier timeline, Jack gets the sense he is being manipulated by unknown individuals, that someone is standing above him pulling the strings.  There’s something in that as he seems to have the uncanny habit of being in the wrong place at the wrong time, sometimes even at the site of a murder.

With a storyline containing so many twists and turns it’s occasionally easy to feel lost so I welcomed Jack sharing his theories in such a cogent manner in the final chapter. Setting out of the moves made by the various characters and their motivations for doing so in the way he does neatly references his own love of solving chess problems. And his piecing together of the disparate parts of the metaphorical jigsaw to reveal the full picture brings to mind Paaske undertaking the same task with the handmade jigsaws sent to him by his artist daughter.

One of the reasons I enjoy historical fiction so much is that I invariably learn things I would have never otherwise known about. For example, I wasn’t aware that Norway had a period of prohibition in the interwar years or that the Norwegian government opposed its citizens joining those fighting the fascists in the Spanish Civil War. Along with the historical detail, the book conjures up a vivid picture of Norwegian lifestyle which is clearly much influenced by its landscape – the lakeside summer houses, swimming and sailing, travelling on the ferries that ply between Oslo and the small islands that surround it.

I believe the mark of a skilful translation is if at no time you feel you are reading a book translated from another language; such was the case here. The book moves along at pace, rather in the manner of the oncoming train in the opening scene. With its intricate plot, The Assistant will keep you guessing until you turn the final page and quite possibly pondering on what you’ve read for some time after that.

Try something similar: The Night of Shooting Stars by Ben Pastor

One of the fathers of the Nordic Noir genre, Kjell Ola Dahl was born in 1958 in Gjøvik. He made his debut in 1993, and has since published eighteen novels, the most prominent of which form a series of police procedurals-cum-psychological thrillers featuring investigators Gunnarstranda and Frølich. In 2000 he won the Riverton Prize for The Last Fix, and he won both the prestigious Brage and Riverton Prizes for The Courier in 2015 (published in English by Orenda Books in 2019). His work has been published in fourteen countries. He lives in Oslo.

Don Bartlett completed an MA in Literary Translation at the University of East Anglia in 2000 and has since worked with a wide variety of Danish and Norwegian authors, including Jo Nesbø and Karl Ove Knausgård. For Orenda he has translated several titles in Gunnar Staalesen’s Varg Veum series: We Shall Inherit the Wind, Wolves in the Dark, the Petrona award-winning Where Roses Never Die and Fallen Angels. He has also translated three books in Kjell Ola Dahl’s Oslo Detectives series for Orenda – Faithless, The Ice Swimmer and Sister – as well as The Courier.