Welcome to today’s stop on the blog tour for Ariadne by Jennifer Saint. My thanks to Anne at Random Things Tours for inviting me to participate in the tour and to Wildfire for my digital review copy via NetGalley.

As Princesses of Crete and daughters of the fearsome King Minos, Ariadne and her sister Phaedra grow up hearing the hoofbeats and bellows of the Minotaur echo from the Labyrinth beneath the palace. The Minotaur – Minos’s greatest shame and Ariadne’s brother – demands blood every year.

When Theseus, Prince of Athens, arrives in Crete as a sacrifice to the beast, Ariadne falls in love with him. But helping Theseus kill the monster means betraying her family and country, and Ariadne knows only too well that in a world ruled by mercurial gods – drawing their attention can cost you everything.

In a world where women are nothing more than the pawns of powerful men, will Ariadne’s decision to betray Crete for Theseus ensure her happy ending? Or will she find herself sacrificed for her lover’s ambition?

Ariadne gives a voice to the forgotten women of one of the most famous Greek myths, and speaks to their strength in the face of angry, petulant Gods.

The first thing that drew me to this book was that I was fortunate enough to visit the site of Knossos on a holiday to Crete many years ago. I was also intrigued by the idea of a book that puts its titular heroine, Ariadne, centre stage in the retelling of the myth of the Minotaur.

A recurring theme of the book is the male domination of society and the imbalance of power between men and women. As Ariadne observes, women – including her own mother, Pasiphaë – are blamed and punished for the actions of men, both mortal and divine.  In fact, it’s not quite as simple as that because, as the book shows, mortal women also suffer at the hands of female Gods.  For example, Ariadne ponders on Athena’s actions in punishing Medusa for her seduction by Poseidon: ‘She must punish the girl who was so shameless as to be overpowered by Poseidon… So Medusa had to pay for Poseidon’s act. It made no sense at all.’

Arguably, the book illustrates the misuse of power per se. For example, Ariadne observes that her brother, the Minotaur, for whom she shows a touching pity when he’s a baby, becomes a display to the world of her father Minos’s dominance. Similarly Minos keeps Daedalus a virtual prisoner on Crete because of his genius for invention and to prevent his knowledge of the secrets of the labyrinth beneath the palace falling into the hands of others.

The author draws the reader into the stories of Ariadne and Phaedra, showing how each in their different way attempt to find their identity and gain some control over their lives.  For Phaedra, used as a political bargaining chip by her brother after the death of Minos in order to secure peace with Athens, it’s about gaining what knowledge she can of the workings of the Athenian state and using that to her advantage.  For Ariadne, living alone in exile on Naxos, it’s about finding the courage and determination to survive. As she says defiantly, ‘I was not Minos’ captive daughter; I was not Cinyras’s trade for copper; nor was I Theseus’s diversion between heroic feats of glory.  Somehow I had survived them all and here I was, free of them at last’.  She does survive, albeit with the help of the male God, Dionysus. In fact, both Ariadne and Phaedra are destined ultimately to be disillusioned, let down and deceived by men who don’t deserve them.

Alongside the stories of Ariadne and Phaedra, there are references to other characters from Greek mythology, such as Medea, Jason and Heracles. At nearly 400 pages, Ariadne is a chunky read but if some sections move at a rather leisurely pace, there are plenty of scenes that are full of energy and drama. For example, the description of a descent into the Underworld.

Although I was aware of the story of Ariadne up to the point of the slaying of the Minotaur and was vaguely aware that she spent time on Naxos, I knew nothing about events in her life thereafter. I had also never heard of her sister, Phaedra, or her mother, Pasiphae. (I obviously should have paid more attention during my Classical Studies lessons at school!) I think this lack of knowledge hampered my ability to fully judge what degree of imagination the author has brought to her retelling of the story of Ariadne. This may also explain why, whilst full of admiration for the superb quality of the writing, my feelings about Ariadne do not quite match the wild – dare I say, Dionysian – enthusiasm of other readers. However, for lovers of Greek mythology, Ariadne is a book I can definitely recommend. And wouldn’t it be great to be reading it on a beach in Crete?

Try something similar: The Silence of the Girls by Pat Barker

Jennifer Saint grew up reading Greek mythology and was always drawn to the untold stories hidden within the myths. After thirteen years as a high school English teacher, sharing a love of literature and creative writing with her students, she wrote Ariadne, her first novel, which tells the legend of Theseus and the Minotaur from the perspective of Ariadne – the woman who made it happen. Jennifer is now a full-time author, living in Yorkshire, England, with her husband and two children. She is working on her second novel, another retelling of ancient myth. 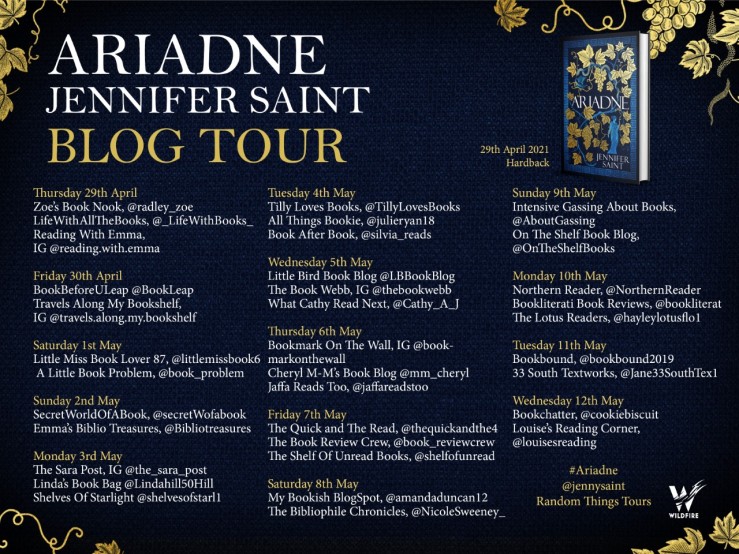