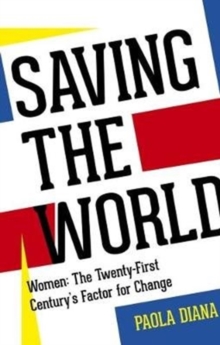 Part manifesto for change, part historical and sociological essay, Saving The World charts women’s condition through the centuries, analysing their treatment within political, religious, economic and societal contexts to form a bigger picture of their place in the world; because to understand the present, and make a meaningful difference, we must get to grips with the past. This is a journey that concludes with a clear vision for a better society in which all women are set free from fear, violence and oppression. Paola Diana impresses on us that this world we inhabit, dominated by men and often seemingly immutable, is far from the only one possible.

Already a bestseller in Italy, this translation has been extensively revised by the author to incorporate recent events that impinge on women’s rights and the struggle to achieve equality. A vivid call for change, Paola Diana’s polemic should be read by all in powerful positions in government, industry and cultural institutions.

Find Saving The World – Women: The Twenty-First Century’s Factor for Change on Goodreads

I found this book thought-provoking in the sense that it made me think but that parts of it provoked me.

Whilst I admired the author’s passionate advocacy for the importance of education for girls and women, there were numerous statements I found contradictory. For example, the author is dismayed at the tendency for women to be judged on their appearance and feel pressurised into resorting to cosmetic surgery to disguise the signs of ageing, yet elsewhere she urges the need for ‘icons of beauty’.

I also found myself taking issue with the author’s suggestion that some characteristics are innately feminine, such as sensitivity and an inclination to take care of others. Echoing the book’s title, she states women are saving the world ‘because they have an attitude of love…an empathetic and multi-faceted perspective’. She contrasts this with ‘brute strength’ which, she seems to suggest, is an innately male characteristic. However, later she argues that mothers have a responsibility to raise ‘mindful and respectful’ sons, suggesting that failing to do so means they must accept some of the blame for perpetuating inequality.

I felt the author had a tendency to present statements of belief as statements of fact. For example, stating, ‘When a woman has a job, she gains more dignity in the eyes of her partner, she feels independent, has high self-esteem and does not tolerate either physical or psychological violence’.  Is she really saying that women who don’t work, perhaps because they have caring responsibilities, shouldn’t expect those benefits or that no women who works has ever experienced domestic violence?  The author also goes on to suggest, without any supporting evidence I could see, a causative link between work, the stress caused by not being able to have children and a resultant decrease in fertility.

I don’t think many would argue with the author’s selection of Malala Yousafzai as a role model for women because of her campaign for the education of girls but some of the author’s other choices seemed distinctly bizarre. For example, Coco Chanel who, although undoubtedly a pioneer in women’s fashion, was accused of collaboration with the Nazis during World War 2 and held some very unsavoury anti-Semitic views. Similarly, although unarguably a publishing phenomenon, J K Rowling’s views on transgender issues have been controversial. In fact, Saving the World is largely silent when it comes to transgender people. And as a male role model Edward VIII seems an odd choice. Yes, he sacrificed his position because of his love for a woman but he was a serial adulterer and made a controversial visit to Germany in 1937 during which he had a meeting with Adolf Hitler.

Where I thought the book was strongest was in shining a light on the oppression that some women face, and setting out practical steps that governments could take to advance the position of women. For example, supporting feminist movements in countries where women face discrimination or making equal rights a condition of membership of economic or political institutions, such as the European Union.  However, I found the author’s assertion that ‘A good mother is a working mother who sets an example to her children of sacrifice and duty’ overly simplistic.

I received a review copy courtesy of Quartet Books and Midas PR.

Paola Diana is an entrepreneur, author and activist, and a regular contributor on TV and radio, both in the UK and Italy. After leading a think tank in support of former European and Italian President Romano Prodi’s political campaign, she went on to found and chair the Diana Group, a market leader in recruitment and lifestyle services for high-net-worth individuals, families and corporations around the world. Diana’s work in this field led to her inclusion in the 2017 edition of Spear’s 500.