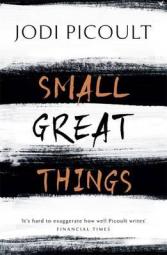 When a newborn baby dies after a routine hospital procedure, there is no doubt about who will be held responsible: the nurse who had been banned from looking after him by his father.

What the nurse, her lawyer and the father of the child cannot know is how this death will irrevocably change all of their lives, in ways both expected and not.

Small Great Things is about prejudice and power; it is about that which divides and unites us. It is about opening your eyes.

Small Great Things is the first book I’ve read by Jodi Picoult but it has made me understand why her novels are so popular. I was completely won over by the combination of compelling storytelling and exploration of serious issues, in this case racial discrimination. Although published back in 2016, the subject matter means it still feels incredibly timely.

Ruth’s treatment at the hands of the parents of the baby, the hospital where she is employed and the police is awful to witness, as are the consequences for her and her son, Edison.  As a white person, I found I could identify with Kennedy, the public defender who becomes Ruth’s counsel. She prides herself on ‘not seeing colour’ but comes to realize that, not only does she fail to appreciate the extent of the racism faced by black people, but she has failed to recognize how she herself has benefited from the inbuilt bias towards white citizens in society. There’s a great scene where Kennedy accompanies Ruth to a shopping mall and witnesses first-hand what Ruth has to endure on a daily basis.

As a bit of a courtroom drama junkie, I particularly enjoyed the scenes depicting Ruth’s trial. I also liked seeing the lead up to the trial as Kennedy, with the help of her assistant Howard, searches out evidence that will help Ruth’s case. As it turns out, Kennedy’s keen eye spots what others have missed leading to dramatic scenes towards the end of the book. As a Brit, I’m always intrigued by the differences between the UK and US legal systems, such as the process of jury selection. I was surprised by the amount of time Kennedy and Howard spend profiling the potential jurors, including carrying out ‘fieldwork’ to identify those likely to be biased against Ruth.

Some may find the book’s ending just a little too neat and/or unrealistic. Personally, I loved the sense that right can prevail and that even hardened attitudes can be changed. In the case of the latter, the author’s extensive research included meeting former members of white power groups, including men whose lives had followed a similar path to Turk’s.

Although I own a hardcover copy of the book, I listened mainly to the audiobook version narrated by Noma Dumezweni, Jeff Harding and Jennifer Woodward. Because the book alternates between three points of view (Ruth, Turk and Kennedy) it lent itself to three different narrators. However, each of them had at times to narrate dialogue by the two other main characters, as well as that of secondary characters, both male and female. I thought they all did a great job. Noma Dumezweni brought real warmth to the voice of Ruth and Jennifer Woodward conveyed Kennedy’s professionalism and dedication. Whilst lending Turk a convincing air of menace and barely suppressed rage, I did feel Jeff Harding’s voice made Turk sound older than the twenty-five years the character is meant to be.  However, that is a very minor quibble.

In her author’s note, Jodi Picoult tackles a question she asked herself when preparing to write the novel, namely what right did she have to write about an experience she had not lived? After all, as she admits, she grew up ‘white and class-privileged’. However, as she points out, if she’d only written about what she knew her career would have been ‘short and boring’. Why, she wonders, should writing about a person of colour be any different from writing about a person of another gender? She concludes, “Race is different. Racism is different. It’s fraught, and it’s hard to discuss, and so as a result we often don’t.”

I’m so glad Jodi did decide to tackle this topic in a novel because not only is Small Great Things a great story, it forces the reader to consider their own potential prejudices. I loved the book and, if there are any fans of Jodi Picoult out there, recommendations for which of her novels I should read next will be gratefully received. 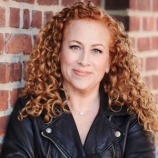 Jodi Picoult is the internationally bestselling author of twenty-four novels, including The Storyteller, House Rules, Nineteen Minutes and My Sister’s Keeper.

She lives in New Hampshire with her husband and children.