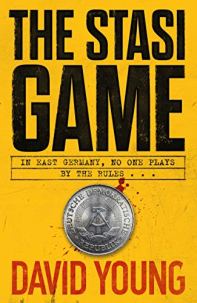 A man’s body is found buried in concrete at a building site in the new town district. When People’s Police homicide captain Karin Müller arrives at the scene, she discovers that all of the body’s identifiable features have been removed – including its fingertips.

The deeper Müller digs, the more the Stasi begin to hamper her investigations. She soon realises that this crime is just one part of a clandestine battle between two secret services – the Stasi of East Germany and Britain’s MI6 – to control the truth behind one of the deadliest events of World War II.

I discovered David Young’s ‘Stasi’ series back in February when I read Stasi Winter, the fifth book featuring Karin Müller of the East German People’s Police. I enjoyed it so much that I made a plan – unfortunately as yet unfulfilled – to go back and read the earlier books ready for the next book in the series. Imagine my dismay therefore to read that The Stasi Game may be the last book in the series. Luckily for those of us who’ve not yet read the whole series, The Stasi Game has been designed as a standalone although there are brief references to events in previous books.

Opening in 1982 and set largely in Dresden, The Stasi Game begins with a dramatic prologue and then transports the reader back to events in the months leading up to it. There are occasional forays further back in time, to the period of the Second World War and a friendship between two young people the full relevance of which will only gradually be revealed. Central to these sections of the book is the still controversial firebombing of Dresden by the Allies in February 1945 which killed thousands and destroyed much of the city. The vivid first-hand account of the raids is one of the standout parts of the book.

From the very start of their investigation into the death of the man they refer to as ‘Concrete Man’, Karin Müller and her team find themselves playing a cat and mouse game with the Ministry of State Security, better known as the Stasi. No prizes for guessing which is the cat and which the mouse. In addition, Müller finds herself coming face to face with an old adversary and begins to wonder if, in fact, she has been set up to fail from the beginning.

As the case progresses, amongst all the twists and turns, some very dirty wartime secrets – as well as more recent ones – are unearthed. The book’s final climatic scenes continue where the prologue left off, leaving the reader to wonder what the future holds for Müller and her colleagues. If this is indeed the end of the series, then The Stasi Game is a lesson in how to go out on a high and leave the reader wanting more.

I received an advance review copy courtesy of Zaffre via NetGalley.

David Young was born near Hull and, after dropping out of a Bristol University science degree, studied Humanities at Bristol Polytechnic. Temporary jobs cleaning ferry toilets and driving a butcher’s van were followed by a career in journalism on provincial newspapers, a London news agency, and international radio and TV newsrooms. He now divides his time between Twickenham and a writing base on Syros in Greece, and in his spare time supports Hull City AFC. (Photo bio/ credit: author website)