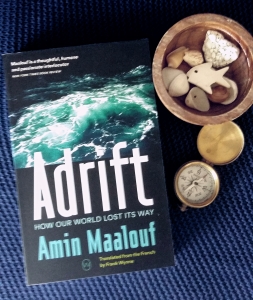 The United States is losing its moral credibility. The European Union is breaking apart. Africa, the Arab world, and the Mediterranean are becoming battlefields for various regional and global powers. Extreme forms of nationalism are on the rise. Thus divided, humanity is unable to address global threats to the environment and our health. How did we get here and what is yet to come?

World-renowned scholar and bestselling author Amin Maalouf seeks to raise awareness and pursue a new human solidarity. In Adrift, Maalouf traces how civilizations have drifted apart throughout the 20th century, mixing personal narrative and historical analysis to provide a warning signal for the future.

Find Adrift: How Our World Lost Its Way on Goodreads

Adrift is one of those books where you find yourself scribbling copious notes or marking multiple passages as you read such is the scope of the subject matter and the depth of information it contains. However, don’t be put off by this because the clarity of the writing (preserved in the translation from the French by Frank Wynne) makes the book both fascinating and accessible to the general reader.

Maalouf regrets that humanity today seems characterized not by a tendency to coalesce around things that unite them but by a tendency to “fragment and splinter, often violently and acrimoniously“. He identifies the most serious rifts as being in the Arab world, tracing these back many decades. His diagnosis of today’s problems as originating in his native land (the area he refers to as the Levant) means he has a very personal reaction to the situation in which the world finds itself. “All my sorrows follow the same path, that of a great hope thwarted, betrayed, distorted or destroyed.”

Maalouf lists what he sees as the missed opportunities by superpowers or political blocs to chart a different course. He charges the United States with failing the “difficult test set by history” due to the inability of successive administrations to establish a new world order or maintain moral credibility. He mourns the missed potential of the European Union, branding it as a “fragile, unfinished, hybrid structure…that is now being violently shaken“.

I was particularly struck by his passionate indictment of negative attitudes towards immigrants and minorities. He sees things very differently. “Often, minorities are pollinators. They fly, they flutter, they gather pollen, and this can make them seem like profiteers, even parasites. It is only when they disappear that one becomes aware of the vital role they played.”

In the midst of a global pandemic, the author’s painstaking analysis of what has gone wrong in our world and what might be necessary to fix it, is particularly timely. As the author observes, “A writer is a watchman; when the house is on fire, it is his responsibility to wake the residents, not leave them to sleep and wish them sweet dreams“.

Returning to his maritime analogy, he warns, “None of the passengers aboard the ship of mankind can now ignore the fact that there are icebergs in our path, and that we must avoid them at all costs“. It could all be rather depressing so I appreciated the author’s conviction that change is possible. In fact, he sees the coronavirus as a ‘stress test’ for every country on earth. Will countries respond by constructing barriers and imposing tighter security on their citizens (what he refers to as ‘Orwellian drift’) or by embracing openness and working cooperatively to defeat the virus? I know which one I would choose.

Amin Maalouf was born in Beirut in 1949. He studied economics and sociology, then worked as a reporter for the newspaper An-Nahar until the Lebanese Civil War broke out. He moved to Paris with his family in 1976, where he became editor in chief for the news magazine Jeune Afrique. He published his first book, The Crusades Through Arab Eyes, in 1983. Ten years later, The Rock of Tanios, his fifth novel, won the Prix Goncourt, the most prestigious literary award in France. In 2010, he received the Prince of Asturias Award for Literature for his entire oeuvre. In 2016 he was designated Cultural Personality of the Year by the Sheikh Zayed Book Award. He was elected to the Academie Francaise in 2012. His books have been translated into fifty languages (Photo credit: Publisher author page)

Frank Wynne is a literary translator who has earned several awards, including the Scott Moncrieff Prize and the Premio Valle Inclán. His recent translation of Vernon Subutex by Virginie Despentes was shortlisted for the Man Booker International 2018.

8 thoughts on “#BookReview Adrift: How Our World Lost Its Way by Amin Maalouf @WorldEdBooks”