The Wartime Classics series was launched in September 2019 to great acclaim. The novels were all written either during or just after the Second World War and are currently out of print. As part of the Imperial War Museum’s commitment to telling the stories of those who experienced conflict first hand, each novel is written directly from the author’s own experience and takes the reader right into the heart of the battle.

Each book has an introduction by Alan Jeffreys (Senior Curator, Second World War, Imperial War Museums) that sets it in context and gives the wider historical background. He says, ‘researching the Wartime Classics has been one of the most enjoyable projects I’ve worked on in my years at IWM. It’s been very exciting rediscovering these fantastic novels and helping to bring them to the wider readership they so deserve’.

You can find a complete list of the books published so far in the Wartime Classics series here.

Look out for my review of another book in the series, Warriors for the Working Day by Peter Elstob later this month. 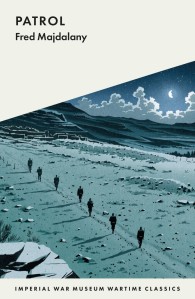 1943, the North African desert. Major Tim Sheldon, close to battle-exhaustion, is tasked with carrying out a futile and unexpected patrol mission. Fred Majdalany’s intimate, tense novel puts this so-called minor action centre stage, as over the course of the day and through the night of the patrol itself, Sheldon reminisces about his time as a soldier, his own future, and what it means to confront fear.

Patrol was a bestseller when it was first published in 1953. Clearly autobiographical, it is based on Fred Madjalany’s own experiences in Tunisia as part of the North African campaign, in particular his command of a night patrol and his time in hospital when wounded. The fictional battalion in the novel is based on 2nd Battalion, Lancashire Fusiliers into which Madjalany was commissioned in 1940. Infantry battalions such as this were constantly in action with little respite, and the officers were very young by peace time standards. The stress of battle aged them considerably.

“He was stubbornly certain that tonight’s effort would serve no useful purpose whatsoever.”

What really comes across as Sheldon leads his men out on what he believes is a futile exercise – a night time reconnaissance patrol in enemy held territory to the so-called White Farm – is the “deep loneliness of command”. Despite his meticulous preparations and reconnaissance, at one point Sheldon fears he may have led the patrol off their intended course in the darkness of no-man’s land. The burden of responsibility weighs so heavy on him that his previous gratitude for his men’s willingness to follow him so unquestioningly becomes an entirely different emotion. “He hated them because he was lost and could feel their eyes behind him. He hated them because the whole patrol was unnecessary and silly…” Unlike the reader, little does Sheldon know just how random, if not criminally negligent, was the choice of White Farm as the objective for their patrol.

In the middle section of the book, Sheldon’s looks back on his wartime experiences up to this point, including his relationship with a nurse during time spent in hospital recovering from a wound incurred during a previous skirmish with the enemy. It’s a period which seems to him now to have been “an interlude of unreality, a fantasy, a mad incredible honeymoon”. It was also during this period that he had his first face-to-face encounter with the enemy in the person of a wounded German officer. He reflects on the strange metamorphosis of “the Enemy” from an abstraction into a person, a person he finds himself thinking as they chat about books and music, “not at all unlike himself”.

Thanks to the helpful and informative introduction by Alan Jeffreys, I was able to get my head around the Army hierarchy – brigades, battalions, companies, and so on. A theme of the book is the gulf that Sheldon perceives between the demeanour, experiences and, frankly, the capability of those at the top, and those on the front line. “They were a curious lot, these HQ people: they had the glossy, confident look of successful businessmen, Sheldon thought. Rotarians in uniform, that’s what they were.”

One of many fascinating and insightful observations by the author is that, far from what one might expect, the war brings with it a degree of simplification: the simplification of merely following orders. So, during the patrol, Sheldon’s “private universe” becomes “a long thin strip of light, seven men wide, with White Farm at the end of it, and all he had to do for the present was to get there”.

Patrol is not just a moving and compelling account of the experience of war but contains some fine writing. I was particularly struck by the section in which Sheldon recalls his experience of an attack on an enemy outpost, the skirmish in which he was wounded. It’s described in short, often single word sentences vividly conjuring up the noise and confusion of battle. I also loved this description of the experience of coming back to base after a night operation. “To a returning patrol first light is sacred and miraculous: not the dawning of a new day but of a new life.”

The final scenes in the book left me with an even stronger sense of the futility of war and the waste of human life it represents. In his introduction, Alan Jeffreys notes that the author’s wife, Sheila Howarth, wrote, ‘I believe in Patrol he was writing his epitaph’. If that is so, the book is a fitting epitaph to a courageous man, and to many others like him.

Try something similar: Eight Hours From England by Anthony Quayle

Frederick Majdalany (1913 – 1967) was the son of a Manchester-based Lebanese family. His original first name was Fareed, which he changed to Frederick or Fred. He was also known as ‘Maj’. He worked as a journalist, drama critic and theatre publicist pre-war. He volunteered in 1939 and was commissioned into the 2nd Battalion, Lancashire Fusiliers in 1940, serving in North Africa and Italy. He was wounded at the Battle of Medjez-el-Bab, returning to the battalion five weeks later with the rank of captain, was later promoted to major, and commanded a company. His unit landed at Taranto in September 1943 where he was awarded the Military Cross during the Italian campaign.

In October 1944 he returned home to become an instructor at an officer cadet training unit, which he later commanded, until demobilization in November 1945. After the war Majdalany resumed his career as a journalist and also worked for the BBC on historical scripts for radio and TV. He published novels and military histories, all of which were very well received. He was also involved with International PEN.