Welcome to today’s stop on the blog tour for The Walls We Build by Jules Hayes. My thanks to Rachel at Rachel’s Random Resources for inviting me to take part in the tour and for organising my review copy.

You can read my review below but, before you do, why not enter the giveaway for the chance to win a signed copy of The Walls We Build (see terms and conditions below). Enter via Rafflecopter here.

Oh, and do be sure to check out the posts by my tour buddies, Tracey at TraceysYearInBooks and Stefanie at The Magic of Wor(l)ds. 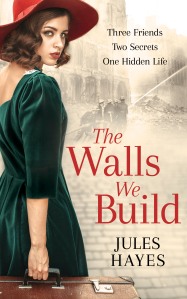 Three Friends … Growing up together around Winston Churchill’s estate in Westerham, Kent, Frank, Florence and Hilda are inseparable. But as WW2 casts its menacing shadow, friendships between the three grow complex, and Frank – now employed as Churchill’s bricklayer – makes choices that will haunt him beyond the grave, impacting his grandson’s life too.

Two Secrets … Shortly after Frank’s death in 2002, Florence writes to Richard, Frank’s grandson, hinting at the darkness hidden within his family. On investigation, disturbing secrets come to light, including a pivotal encounter between Frank and Churchill during the war and the existence of a mysterious relative in a psychiatric hospital.

One Hidden Life … How much more does Florence dare reveal about Frank – and herself – and is Richard ready to hear?

Find The Walls We Build on Goodreads

I was drawn to this book both by its setting (I visited Chartwell some years ago) but also by the promise of an absorbing family drama combining past and present. I was not disappointed on either count.

I loved the sections set in Chartwell and the occasional appearances by Winston Churchill. The author really managed to capture his humanity, charisma and effect on those around him but also his eccentricity and his very human flaws. It is Churchill who provides the advice that gives the book its title. “Remember, the walls we build are not to keep people out but to keep our mind within… Often we are our own wall.”

The Walls We Build is intricately plotted and the frequent switches in time period and changes of point of view do require some concentration on the part of the reader. However, this effort will be well-rewarded. I particularly admired the sections involving Frank’s wartime experiences in North Africa which were both gripping and realistically depicted.

It is a clever choice by the author to make Frank’s grandson, Richard, a barrister. With his lawyer’s instinct for uncovering the truth and his keen sense of justice – not to mention some useful resources at his disposal and the odd bit of luck – he is a natural vehicle ‘to make sense of the muted kaleidoscope of his family’s past’ and, on the reader’s behalf, to join together the dots, as it were, from the hints and clues scattered throughout the book. Richard also faces his own present day family dilemmas, some of which echo past events with history in danger repeating itself. At the same time, they underline how times and attitudes have changed.

Spanning the decades from 1920s to 2002, the book touches on some important themes including attitudes to mental illness and women’s changing role in society. The Walls We Build is also a compelling and emotional story about how secrets of the past, however seemingly well-buried, have a habit of coming to the surface eventually and how actions can have unforseen consequences. For Frank, Hilda and Florence that is definitely the case. As Florence observes, ‘Secrets and denial: if there’d been fewer of the former and more understanding of the latter, all of their destinies would have taken a different path’.

Try something similar: The House by the Loch by Kirsty Wark

Jules Hayes lives in Berkshire with her husband, daughter and a dog. She has a degree in modern history and holds a particular interest in events and characters from the early 20th century. As a former physiotherapist and trainer – old habits die hard – when not writing Jules likes to run. She also loves to watch films, read good novels and is a voracious consumer of non-fiction too, particularly biographies.

Connect with J A Corrigan