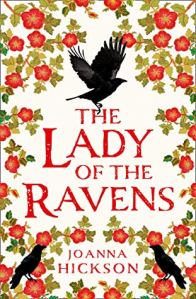 “My baptismal name may be Giovanna but here in my mother’s adopted country I have become plain Joan; I am not pink-cheeked and golden-haired like the beauties they admire. I have olive skin and dark features – black brows over ebony eyes and hair the colour of a raven’s wing…”

When Joan Vaux is sent to live in the shadow of the Tower of London, she must learn to navigate the treacherous waters of this new England under the Tudors. Like the ravens, Joan must use her eyes and her senses, if Henry and his new dynasty are to prosper and thrive.

Find The Lady of the Ravens on Goodreads

The Lady of the Ravens is a fictionalized account of the life of Joan Vaux, lady-in-waiting to Elizabeth, wife of Henry VII. Through Joan’s privileged access, the reader gets a glimpse into the marriage of the King and Queen and of life at Court.

Opening shortly after the Battle of Bosworth and early in the reign of Henry VII, it’s apt that the collective term for a gathering of ravens is a ‘conspiracy’ for it’s a time of unrest, shifting allegiances, the threat of revolt and pretenders to the throne. It’s no wonder that Joan should set such store by the welfare of the ravens who make the Tower of the London their home given the legend that their presence ensures the nation’s security. Joan is also drawn to the ravens for their cleverness and the beauty of their sleek plumage. With her dark hair and olive skin, that sets her apart from other ladies of the Court, she feels an affinity with them as “fellow misfits”.

The book will appeal to readers who like their historical fiction well populated with historical fact. I confess that, whilst appreciating the depth of research, I found the first half of the book a teeny bit slow. I was also a little distracted by the occasional use of modern phrases such as ‘dress to impress’, ‘super-intelligent’, ‘top-security secrets’ and ‘kept under wraps’. However, once the action moved to Kent and Joan’s life was centre stage, I found myself falling under the book’s spell and eager to find out what lay in store for Joan and those close to her.

The book ends at the point of Prince Arthur’s marriage to Katharine of Aragon and before significant events in Joan’s own life, including her part in what would come to be referred to as Henry VIII’s “great matter”, leaving open the prospect of a follow-up book.

The Lady of the Ravens is a well-crafted historical novel set in an interesting period in England’s history. I received an advance review copy courtesy of Harper Collins via NetGalley.

Try something similar: The White Princess by Philippa Gregory

Joanna Hickson spent twenty five years presenting and producing News and Arts programmes for the BBC. Her first published book was a children’s historical novel Rebellion at Orford Castle but more recently she has turned to adult fiction, concentrating on bringing fifteenth century English history and some of its fascinating principal characters to life.

She is married with a large family and gets inspiration from her Wiltshire farmhouse home, which dates back to her chosen period.

Been trying to catch up on the lovely #books I've received from @readersfirst These are the ones still patiently waiting #bookshelf #bookstagram #tbrpile
Look at the lovely paperback edition of Clare Carson's #thecanarykeeper courtesy of @headofzeus | Look out for my #bookreview as part of the #blogtour #bookstagram #bookpost #historicalfiction
Loved #TheGoodDoctorOfWarsaw so really looking forward to reading this one #thelostlightsofstkilda
Wonderful #bookpost today...the two books I'll be reading from the #dylanthomasprize longlist
My #BuchanOfTheMonth selection for 2020 - minus The Magic Walking Stick which I don't have a physical copy of #johnbuchan #readingchallenge2020 #ReadJB2020 #books
Fabulous #bookpost & #giveaway prize courtesy of @orionbooks #theforgottenlettersofestherdurrant by @kaytenunn2 #bookstagram

What Cathy Read Before