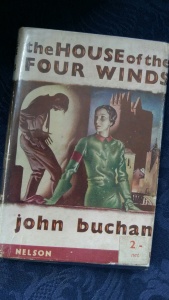 A sequel to Huntingtower and Castle Gay, The House of the Four Winds is set in Central Europe in the 1930’s. Scottish grocer Dickson McCunn features in his most exciting role.

‘Gorbals Die-hards’ Jaikie and his pals are now dabbling in politics. On his trek across Europe, Jaikie is warned to avoid Evallonia. It is in danger of being overthrown by the cruel Mastrovin. However Jaikie cannot resist taking a look and ends up needing to be rescued. Evallonia’s fate hangs in the balance until Dickson McCunn appears on the scene.

Find The House of the Four Winds on Goodreads

The oft-quoted line from the classic film Casablanca – “Of all the gin joints, in all the towns, in all the world, she walks into mine” – comes to mind when considering the situation that sees numerous characters from previous Buchan novels find themselves, through one route or another, caught up in the politics of the fictional European country of Evallonia.  Or, as Buchan scholar Kate MacDonald notes, the book’s ‘crossover tendencies between the separate Buchan worlds’.

I’ll confess it was hard work at times trying to keep up with (or maintain much interest in) the different political factions challenging for control of Evallonia, and which characters belonged to which faction. As well as the elements you might expect from a Buchan adventure – kidnapping, miraculous escapes, cunning disguises – there are some lighthearted moments, such as a fortuitous rescue involving a circus elephant – at which point a character remarks, “Had this been an episode in a novel, it would have been condemned for its manifest improbability”.

The formidable woman who features on the dust jacket of my copy (see image above) and is much talked about by other characters – the splendidly named Countess Araminta Troyos – makes a relatively late entrance to the story in person. When she does, she has a rather disappointing role to my mind. It doesn’t help that she’s pretty much a painting by numbers femme fatale along the lines of Hilda von Einem in Buchan’s Greenmantle. (Kate MacDonald places her alongside Hilda in the ‘exotica’ category of Buchan’s female characters.)

As most critics have said The House of the Four Winds is not Buchan at his best. The book is entertaining but no more than that and, even though I’m not a particular fan of the Dickson McCunn series, I have to say the first two books, Huntingtower and Castle Gay, are better if only because they’re set in a location more familiar to Buchan.

Suitably for Nonfiction November, this month’s Buchan of the Month is Augustus, his biography of the Roman Emperor. Look out for my introduction to the book and my review later this month.