This is a longer version of a review that appeared on The Henley Standard website. It is based on notes I took during the event and my own recollections. Any errors in recording views expressed during the discussion are my own.

After being welcomed onboard Hobbs of Henley’s Hibernia with a glass of fizz, book critic and writer Stephanie Cross got the party started by introducing us to authors Stephanie Wrobel and Hope Adams. (As we were blessed with the presence of two Stephanies, to avoid confusion, SC in this blog post refers to Stephanie Cross.) Both authors have debut novels out next year so SC remarked it seemed fitting today’s event was taking place on a boat; a maiden voyage in more than one sense.  Hope’s novel even opens on board a ship on the River Thames.  She described both books, The Recovery of Rose Gold and Conviction, as “twisty, stay up all night reads”.

SC then invited Hope and Stephanie to talk about their books, the inspiration behind them and read short extracts.

Hope explained that whilst visiting an exhibition of quilts at the Victoria & Albert Museum in 2009 she’d been intrigued to learn that one beautiful example was sewn by female convicts aboard a ship, the Rajah.  When she discovered that, by the end of the three month voyage, one of the prisoners had become engaged to the Captain, the idea for Conviction was born. She quipped that if she’d made up that last turn of events her editor would probably have said, ‘Don’t be silly’. For various reasons, Hope only took up the idea for the book again in 2016.

Asked about her research for the book, Hope said the voyage was quite well-documented but admitted she’d invented an awful lot such as changing real names. The exception was the three main characters, including the book’s heroine, Kezia Hayter.  Kezia was the cousin of George Hayter, court painter to Queen Victoria. Hope then read a scene from the book in which Kezia tells her fellow prisoners about the time she met Queen Victoria.

SC asked Hope about the other female characters who feature in the book, christened the ‘Newgate Nannies’. Hope said she’d invented them to introduce a bit of grit in the form of some hard, rough, tough women and also because her daughter (who just happens to be bestselling author Sophie Hannah) always tells her she can’t do ‘proper’ villains. The ‘Newgate Nannies’ are there to provide a bit of comedy as well, she explained, although they’re definitely women you wouldn’t want to cross.

The novel opens with (in Hope’s words) a “dastardly deed” and the reader soon learns one of the women is not who she says she is.  She explained there were 200 women on the ship but only twenty who sewed the quilt, so that helped her narrow down the number of suspects. Given all the suspects are in one place making it a classic closed room mystery, SC wondered how much of a challenge it was to be confined to one location? Hope said she ‘cheated’ by allowing the reader to go back in time to the past lives of three of the women.

SC felt the book really immerses the reader in life on board the Rajah and asked Hope about her research. Hope confessed it’s easy to get so excited about research that you never get around to writing. Engagingly self-deprecating, she described herself as ‘extremely lazy’ when it comes to research, claiming she read one book and that was it. However, she was fortunate to be contacted by an old friend who just happens to be an expert in 19th century textiles. Asked about the book’s title – Conviction – Hope explained it has a double meaning in the sense that the women are convicts but also Kezia is an extremely pious Christian with strong religious belief.

In Stephanie’s novel, Rose Gold spends the first eighteen years of her life believing she is sick. However it transpires her mother, Patty, has made it all up and there was nothing wrong with Rose Gold at all.  Stephanie described The Recovery of Rose Gold as being about “obsession, reconciliation, revenge and the unbreakable bond between mother and daughter”. She then read an excerpt from the first chapter of the book.

Stephanie said the idea for the book arose from the experience of a close friend who is a teacher and became concerned about a student. Stephanie started to research Munchausen’s syndrome and was intrigued to learn the perpetrators are usually mothers. Told from the alternating points of view of Rose Gold and her mother, Stephanie confessed she found getting inside the head of Patty a ‘meaty challenge’ but one she relished. Observing the adage that every villain in a story believes they’re the hero, she said she’d tried hard to make Patty a well-rounded character.

SC observed that early on in the book the reader learns Patty has poisoned Rose Gold but in another sort of novel that could have been the ‘big reveal’. Had Stephanie at any point considered making the disclosure of this fact the ending of the book? Stephanie said no because she was more interested in allowing the reader to get inside the head of Patty. SC asked if Patty’s voice had come to her easily. Stephanie said it had – a ‘sarcastic, snippy tone’ with a Midwestern accent. Getting Rose Gold’s voice had been a lot harder and took a number of drafts. For instance, being socially isolated, with no TV and her reading restricted, Rose Gold wouldn’t be aware of some colloquialisms.

Asked if they had any advice for aspiring novelists, both Hope and Stephanie were strong advocates of the benefit of an agent and of having a plan of the outline structure of a book before starting to write. Hope joked that her daughter positively insists she does this. Stephanie said she’d found the feedback from tutors and fellow students on her Creative Writing degree invaluable. (The Recovery of Rose Gold was her thesis.)

The two authors shared their experience of being edited. Having worked in advertising previously, Stephanie was used to having her work critiqued. She observed that, when someone wants to publish your book, you soon feel you’re on the same team. Hope said she’d always been very happy to have others suggest changes – adding jokingly, ‘As long as I agree with them!’ A good editor, she feels, will suggest ‘What about doing this?’ and she’ll wonder, ‘Why didn’t I think of that?’

At this point Hope said she thought she should come clean that, although Conviction is a debut for Hope Adams, this is a pseudonym and as her real self (Adele Geras) she has been writing for forty years, mainly books for children and teenagers. She decided to use a pseudonym because she wanted to make Conviction a very different book and chose a plain name and one with a surname at the top of the alphabet – useful on bookshop shelves! She joked that she’s had to practice a new signature. (She got plenty of practice shortly afterwards as we queued to have her sign our proof copies!)

Questions from the audience included: 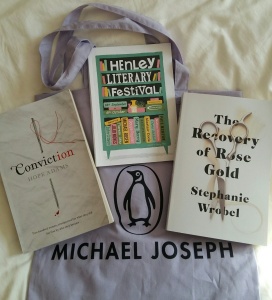 Those of us lucky enough to attend the event left with proof copies of both books. Other readers will have to wait until next year to get their hands on copies. However, on the evidence of today, it will be well worth the wait.

Thanks to Michael Joseph, Henley Literary Festival and Hobbs of Henley for organising a fantastic event.