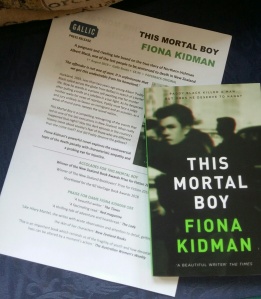 ‘The offender is not one of ours. It is unfortunate that we got this undesirable from his homeland.’

Auckland, October 1955. If young Paddy Black sings to himself he can almost see himself back home in Belfast. Yet, less than two years after sailing across the globe in search of a better life, here he stands in a prison cell awaiting trial for murder. He pulled a knife at the jukebox that night, but should his actions lead him to the gallows? As his desperate mother waits on, Paddy must face a judge and jury unlikely to favour an outsider, as a wave of moral panic sweeps the island nation.

Fiona Kidman’s powerful novel explores the controversial topic of the death penalty with characteristic empathy and a probing eye for injustice.

Find This Mortal Boy on Goodreads

In This Mortal Boy, the author depicts not just Albert Black’s trial and the events leading up to it but the effect on other people involved. There’s his family back in Belfast naturally, especially his mother, who leads attempts to obtain mercy for her son. But also the jury members, some of whom are more troubled by their role in potentially taking the life of a man than others, the prison staff and governor who must oversee Albert’s final days and hours, and most movingly perhaps Oliver Buchanan, part of Albert’s defence team, with sons of his own. ‘Once, he would have wished them to follow the law, as he has done, but now he hopes they will not. The law, as it stands at this moment, seems cruel and unjust, a carapace for power and revenge, designed by men who have been to war and can’t let the past go; must hunt down enemies for the rest of their lives.’

The author also explores the wider societal and political background to the case: public attitudes towards immigrants and youth culture; the role of the press in forming or even inflaming public opinion. Issues which, sadly, still form part of public discourse today.

As the book is based on real events, there is a sense of inevitability about the outcome. However, the sensitive way the story is told and the way in which the various issues are explored maintains the reader’s interest. The closing chapters of the book detailing Albert’s final days following his conviction and sentencing are poignant, incredibly moving but also chilling.

This Mortal Boy is a compelling story of discrimination, prejudice, closed minds and entrenched attitudes resulting in the waste of a life. Whether or not Albert Black was a victim of a miscarriage of justice is up to each reader to decide but, for me, the author persuasively made the case that this was so.

This is the first book I’ve read by Fiona Kidman. I came to it with high expectations because of positive reviews by other book bloggers; I wasn’t disappointed. There is beautiful writing and I especially liked the way the author captured the rhythms of speech of the various characters. I also loved the inclusion of Irish folk and popular songs.

Fiona Kidman is campaigning for Albert Black’s conviction to be downgraded to manslaughter on the grounds of self-defence. You can read about her campaign here.

I received a review copy courtesy of publishers, Gallic Books. 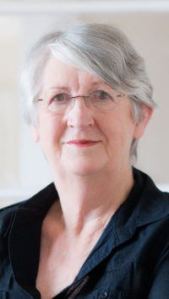 Kidman has won numerous awards, and she has been the recipient of fellowships, grants and other significant honours, as well as being a consistent advocate for New Zealand writers and literature.

She is the President of Honour for the New Zealand Book Council, and has been awarded an OBE and a Dame Companion of the New Zealand Order of Merit for her services to literature. (Bio/photo credit: Gallic Books author page)