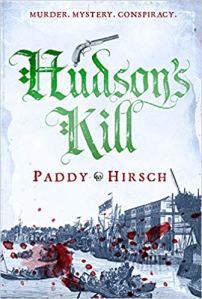 New York, 1803. The expanding city is rife with tension, and violence simmers on every street as black and Irish gangs fight for control.  When a young girl is found brutally murdered, Marshal Justy Flanagan must find the killer before a mob takes the law into its own hands.

Kerry O’Toole, Justy’s friend and ally, decides to pursue her own inquiries into the girl’s murder.  When they each find their way to a shadowy community on the fringes of the city, Just and Kerry encounter a treacherous web of political conspiracy and criminal enterprise.  As events dangerously escalate, they must fight to save not only the city,  but also themselves…

I loved The Devil’s Half-Mile, the first book in the series, and in Hudson’s Kill the author once again transports the reader to the powder keg that is New York in 1803, where gangs and other power brokers are seeking to stake their claims to areas of the rapidly expanding city.

The author brilliantly conjures up the sights, sounds and smells of early nineteenth century New York. Aptly described as ‘a dangerous place to live’, the city is overcrowded, many of its inhabitants are prey to gang warfare and disease, and the contrast between the slums and shanty towns of the poor and the lavish homes of the rich is stark.

The story’s told in the same colourful, lively prose as the previous book. Generous helpings of period slang (nimgimmer, dimber), imaginative curses (‘tossy-locked florence’) and memorable one-liners (‘Just because I’m togged in buntings and a snicket don’t mean you can treat me like some judy hick’) add to the sense of authenticity and atmosphere. You’ll definitely want to make use of the helpful glossary at the back of the book and it’s only right to give a shout out to the copy editing and proofreading team. And, if you’ve ever wondered about the hierarchy of prostitutes in early nineteenth century New York, well, Paddy Hirsch has done the research for you. As Kerry learns in preparation for an undercover role, it goes ‘bunters’, ‘buricks’, ‘curtezan’ and top of the tree, ‘gentry-mort’.

I was pleased to see many of the larger-than-life characters from the first book make return appearances: Justy’s uncle, Ignatius Flanagan, known as ‘The Bull’; Justy’s friend, Lars Hokkanssen, the tough red-bearded sailor; streetwise Kerry O’Toole; and Kerry’s cousin, Lew Owens. But there are also new characters to get to know, such as the memorably named Hardluck. And, of course, there’s the man himself, Justy Flanagan. His moral complexity makes him a fascinating and engaging leading character. He’s shrewd, observant, resourceful and pretty handy with a ‘chive’ or in a ‘clutch’. (Sorry, you need that glossary again.) But Justy, a word – Eliza is definitely not the woman for you. You need to listen to Lars.

The gruesome discovery in the opening chapter sees Justy and Kerry each embark on their own inquiries into the death of a young girl. Whilst for Justy it’s largely professional, it also speaks to his sense of justice and desire to see everyone – rich or poor, black or white – treated equally under the law. As he says, “We have to speak for her. We have to act for her. And that means finding her killer”. For Kerry, there’s a very personal reason why she’s equally determined to see justice done.

However, if you ask questions, especially questions that bring you to the attention of criminals and murderers, then you court danger, as both Justy and Kerry find out to their cost. Throw in a range war between competing gang leaders, corruption and conspiracy in high places and you have all the components for a conflagration – and not necessarily just metaphorical. Oh, and remember there are spies and informers everywhere so be very careful who you trust.

The plot takes advantage of the febrile state of New York at the beginning of the nineteenth century to create a page-turning crime mystery but also touches on issues of contemporary relevance, such as immigration, racial discrimination and segregation.

Paddy Hirsch certainly knows how ‘to spin a cakey dit’*.  Hudson’s Kill is as fast-moving and intricately plotted as its predecessor with the same fantastic period atmosphere and great cast of characters. I absolutely loved it. On behalf of historical crime fans, I fervently hope there are more adventures awaiting Justy Flanagan.

I received an advance review copy courtesy of Readers First and publishers, Corvus.

* to tell a good story (You see why you need that glossary?)

Paddy Hirsch was educated in Dublin and Belfast, and the University of Warwick, where he founded the University’s Irish Society.  He started his journalism career in Hong Kong after a short stint in the military, and spent the next few years working in East and Southeast Asia, and Eastern Europe.  From there to America, where he covered various aspects of Wall Street for a variety of American and European news outlets.  He now lives in Los Angeles.  (Photo credit: Goodreads author page)