Vernon Milbourne, orphaned since childhood and haunted by a recurring dream, is friends with the protective lawyer and MP, Sir Edward Leithen. An Aegean cruise takes them to the mysterious island of Plakos, where Vernon is fascinated by the island’s myths. Local superstitions turn to menace as Vernon’s encounter with a beautiful woman results in obsession and adventure.

New York in 1803 is rife with tension as the city expands, and whoever knows where the city will build can control it. And violence builds as a mysterious provocateur pits the city’s black and Irish gangs against each other.

When a young black girl is found stabbed to death, both Justy Flanagan, now a City Marshal, and Kerry O’Toole, now a school teacher, decide separately to go after the killer. They each find their way to a shadowy community on the fringes of the growing city, where they uncover a craven political conspiracy bound up with a criminal enterprise that is stunning in its depravity.

Justy and Kerry have to fight to save themselves and the city, and only then can they bring the girl’s killer to justice.

A serendipitous meeting on a beach in Galveston before a hurricane forces two strangers to take shelter with each other. Birdie, an older woman, and Jude, a young woman and lone survivor of a fatal accident are destined to spend time together during a strengthening storm. Their lives couldn’t be any different. However, they recognize something in the other that forges a friendship between them. As their relationship solidifies, they share glimpses of their past.

Birdie is a product of the ’60’s, an aging hippie, with a series of resentments hovering over her present life. She had a sheltered childhood in an upper class family. Her parents longed to see her make the Texas Dip at their krewe’s Mardi Gras ball. Jude, however, entered foster care as an infant. Her parents, victims of a murder/suicide, left her and her siblings orphans and separated into different homes.

Their backgrounds couldn’t have been more different, but there is something about their connection that strikes Birdie as familiar. Can souls know each other in different lives? Birdie struggles with the awareness that she has had regrets and hasn’t lived an authentic life, while Jude faces an uncomfortable truth about her own life.

When a young writer accepts a job at a university in the remote countryside, it’s meant to be a fresh start, away from the big city and the scene of a violent assault she’s desperate to forget. But despite the distractions of a new life and single motherhood, her nerves continue to jangle. To make matters worse, a vicious debate about violence against women inflames the tensions and mounting rivalries in her creative writing group.

When a troubled student starts sending in chapters from his novel that blur the lines between fiction and reality, the professor recognises herself as the main character in his book – and he has written her a horrific fate.

Will she be able to stop life imitating art before it’s too late?

When Liv, Ellen and Håkon, along with their partners and children, arrive in Rome to celebrate their father’s seventieth birthday, a quiet earthquake occurs: their parents have decided to divorce.

Shocked and disbelieving, the siblings try to come to terms with their parents’ decision as it echoes through the homes they have built for themselves, and forces them to reconstruct the shared narrative of their childhood and family history.

A bittersweet novel of regret, relationships and rare psychological insights, A Modern Family encourages us to look at the people closest to us a little more carefully, and ultimately reveals that it’s never too late for change… (Review to follow as part of blog tour)

“We’ve been waiting for an hour.” That’s what Audrey says. She states it with a little bit of an edge, her words just bordering on cursive. That’s the thing I think first. Not: Audrey Hepburn is at my birthday dinner, but Audrey Hepburn is annoyed.”

At one point or another, we’ve all been asked to name five people, living or dead, with whom we’d like to have dinner. Why do we choose the people we do? And what if that dinner was to actually happen? These are the questions Rebecca Serle contends with in her utterly captivating novel, The Dinner List, a story imbued with the same delightful magical realism as One Day, and the life-changing romance of Me Before You.

When Sabrina arrives at her thirtieth birthday dinner she finds at the table not just her best friend, but also three significant people from her past, and well, Audrey Hepburn. As the appetizers are served, wine poured, and dinner table conversation begins, it becomes clear that there’s a reason these six people have been gathered together. 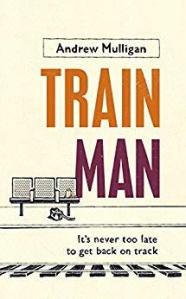 It’s never too late to get back on track.

Michael is a broken man. He’s waiting for the 9.46 to Gloucester, so as to reach Crewe for 11.22: the platforms are long at Crewe, and he can walk easily into the path of a high-speed train to London. He’s planned it all: a net of tangerines (for when the refreshments trolley is cancelled), and a juice carton filled with neat whisky (for Dutch courage). He has his last credit card taped to the inside of his shoe – and that should make identification swift and easy.

What Michael hasn’t factored in is the twelve minute delay, which risks him missing his connection, and making new ones. He longs to silence the voices in his own head: ex-girlfriends, work colleagues, and the memories from his schooldays, decades old. They all torment him. What he really needs is someone to listen, and help him make sense of his grief.

Journeys intersect. People find people when and where they least expect it. A missed connection needn’t be a disaster: it can save your life.