Four very different women respond to an advertisement in The Times appealing to “those who appreciate wisteria and sunshine” to rent a small medieval Italian castle for a month.

Mrs Wilkins and Mrs Arbuthnot, the original two respondents, are joined in their act of escape by the youthful Lady Caroline, whose beauty and general melodiousness have become something of a burden to her, and the formidable Mrs Fisher, who insists that everyone think of her “just as an old lady with a stick” as she sets about imposing her will on the rest. Each one is vaguely unsatisfied with their lot and Mrs Wilkins and Mrs Arbuthnot both have marriages of quiet English unhappiness.

The climate and the castle eventually start to have an effect on the four women. Their perceptions shift and they wake up to the love in their lives.

Find The Enchanted April on Goodreads

The Enchanted April was the book selected from my Classics Club list for the latest Classics Club spin.  Find out what others have been reading by following the hashtag #ccspin on Twitter.

In The Enchanted April, the author depicts a particular social milieu (none of the four women are employed or completely financially independent) and presents a gently mocking view of their petty squabbles over sitting rooms, seating arrangements and personal space when they finally arrive at San Salvatore.  Incidentally, I felt sorry for the servants, especially Francesco and Domenico, having to deal with the demands and changing moods of their ‘four mistresses’.  There’s also some humour directed at the English abroad, including their complete reliance on people from other countries to speak English…and at Italian plumbing.

Of the four female characters, some were definitely more likeable than others, although all were more likeable than the men (with the possible exception of Thomas Briggs).  I liked Lotty’s (Mrs. Wilkins) instinct for other people’s moods and needs, and her immediate response to the uplifting atmosphere of San Salvatore.  I certainly don’t think she deserved the pompous Mr. Wilkins, who’s always on the lookout for people with ‘troubles’.  ‘Trouble here, trouble here, thought Mr. Wilkins, mentally rubbing his professional hands… Well, he was the man for trouble.  He regretted, of course, that people should get into it, but being in, he was their man.’ The most sympathetic figure for me was definitely Rose (Mrs. Arbuthnot) although, again, I’m not sure her husband quite deserved her patience and admiration.

There are some particularly lovely descriptions of the gardens and scenery surrounding the castle, conjuring up a picture of a magical location.  ‘Presently the tamarisk and the daphnes were at their best, and the lilies at their tallest.  By the end of the week the fig-trees were giving shade, the plum blossom was out among the olives, the modest weigelias appeared in their fresh plink clothes, and on the rocks sprawled masses of thick-leaved, star-shaped flowers, some vivid purple and some a clear, pale lemon.’

I think we all know what a positive effect natural beauty and the outdoors can have on our mood so perhaps it’s unsurprising that it has the same effect on the foursome. At the end of the book, all the characters have been changed by their time in San Salvatore, whether that’s discovering or re-discovering love and friendship.  Are they all nicer people as a result?  Possibly. But at the very least they have it within their power to become so.

The Enchanted April delivers a joyful message about the impact the beauty of the natural world can have on people, their outlook and relationships, and the possibility of second chances. 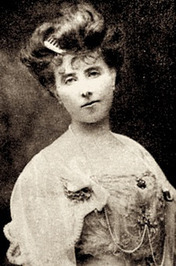 Elizabeth, Countess Russell, was a British novelist and, through marriage, a member of the German nobility, known as Mary Annette Gräfin von Arnim.  Born Mary Annette Beauchamp in Sydney, Australia, she was raised in England and in 1891 married Count Henning August von Arnim, a Prussian aristocrat, and the great-great-great-grandson of King Friedrich Wilhelm I of Prussia. She had met von Arnim during an Italian tour with her father. They married in London but lived in Berlin and eventually moved to the countryside where, in Nassenheide, Pomerania, the von Arnims had their family estate. The couple had five children, four daughters and a son. The children’s tutors at Nassenheide included E. M. Forster and Hugh Walpole.

In 1898 she started her literary career by publishing Elizabeth and Her German Garden, a semi-autobiographical novel about a rural idyll published anonymously and, as it turned out to be highly successful, reprinted 21 times within the first year. Von Arnim wrote another 20 books, which were all published “By the author of Elizabeth and Her German Garden”.

Count von Arnim died in 1910, and in 1916 Elizabeth married John Francis Stanley Russell, 2nd Earl Russell, Bertrand Russell’s elder brother. The marriage ended in disaster, with Elizabeth escaping to the United States and the couple finally agreeing, in 1919, to get a divorce. She also had an affair with H. G. Wells.

Elizabeth von Arnim spent her old age in London, Switzerland, and on the French Riviera. When World War II broke out she permanently took up residence in the United States, where she died in 1941, aged 74. (Photo credit: Goodreads author page)