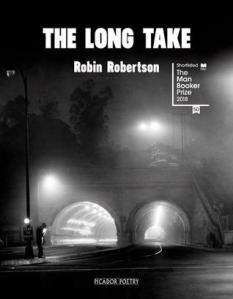 Walker, a young Canadian recently demobilised after war and his active service in the Normandy landings and subsequent European operations.

Suffering from post-traumatic stress disorder, and unable to face a return to his family home in rural Nova Scotia, he goes in search of freedom, change, anonymity and repair. We follow Walker through a sequence of poems as he moves through post-war American cities of New York, Los Angles and San Francisco. 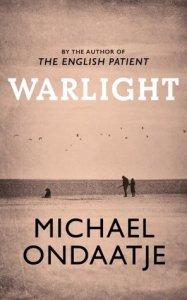 It is 1945, and London is still reeling from years of attritional war. 15-year-old Nathaniel and his sister seem to have been abandoned by their parents in a big house in Putney, and the ruined city is a strange Expressionist jungle after the Blitz, which the teenagers use as their playground. The Black Market and petty criminals are thriving and the two children’s eccentric guardians – nicknamed the Moth and the Darter – are busy smuggling munitions through the darkened London streets, or greyhounds from France through the rivers and canals.

When the children discover that their mother has not gone to Singapore as announced, and is actually engaged in perilous work for British Intelligence – and that the Moth and the Darter are protecting them from harm – the novel darkens and deepens into Nathaniel’s search for the truth: for the mother he lost once and may well lose again.

Michael Ondaatje, one of our greatest living writers, surpasses himself with this vivid, thrilling new novel: a classic adventure with a cast of brilliantly-drawn characters on secret missions through the Suffolk countryside and the London blackout, and one boy’s quest to discover his mother – who she was, and who she really is.

1862 – Growing up in the small seaside town of Cowes on the Isle of Wight, free-spirited Eveline Stanhope feels trapped by the weight of expectation from her well-to-do family. Her mother and two elder sisters would rather she focus her attention on marrying well, preferably to the wealthy Charles Sandham, but Eveline wants more for herself, and the arrival of the railway provides just the cause she’s been searching for.

Driven by the cherished memories of her late father, Eveline is keen to preserve the landscape he loved so much and becomes closely involved with the project. She forms a growing attachment to engineer Thomas Armitage. But when the railway is complete and Thomas moves on, will Eveline wish to return to the way things were?

A small village full of aspiring writers + The devil in the form of a hot-shot publisher = A refined and engaging literary fable on narcissism, vainglory and human weakness.

Wild rabies runs rampant through the woods. The foxes are gaining ground, boldly making their way into the village. In Dichtersruhe, an insular yet charming haven stifled by the Swiss mountains, these omens go unnoticed by all but the new parish priest. The residents have other things on their mind: Literature. Everyone’s a writer—the nights are alive with reworked manuscripts. So when the devil turns up in a black car claiming to be a hot-shot publisher, unsatisfied authorial desires are unleashed and the village’s former harmony is shattered.

Taut with foreboding and Gothic suspense, Paolo Maurensig gives us a refined and engaging literary parable on narcissism, vainglory, and our inextinguishable thirst for stories. 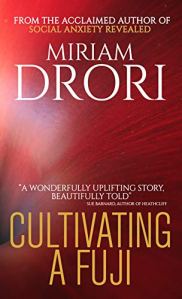 Convinced that his imperfect, solitary existence is the best it will ever be, Martin unexpectedly finds himself being sent to represent his company in Japan. His colleagues think it’s a joke; his bosses are certain he will fail. What does Martin think? He simply does what he’s told. That’s how he’s survived up to now – by hiding his feelings.

Amazingly, in the land of strange rituals, sweet and juicy apples, and too much saké, Martin flourishes and achieves the impossible. But that’s only the beginning. Keeping up the momentum for change proves futile. So, too, is a return to what he had before. Is there a way forward, or should he put an end to the search now?

Gradually, as you’ll see when Martin looks back from near the end of his journey, life improves. There’s even a woman, Fiona, who brings her own baggage to the relationship, but brightens Martin’s days. And just when you think there can be no more surprises, another one pops up.

Throughout his life, people have laughed at ‘weirdo’ Martin; and you, as you read, will have plenty of opportunity to laugh, too. Go ahead, laugh away, but you’ll find that there’s also a serious side to all this… (Review to follow as part of blog tour) 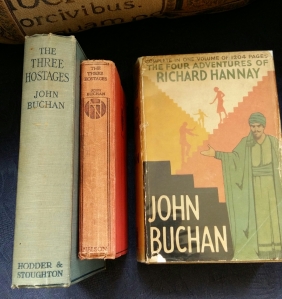 After the war and newly knighted, Hannay is living peacefully in the Cotswolds with his wife Mary and son Peter John. Unfortunately, a day arrives when three separate visitors tell him of three children being held hostage by a secret kidnapper. All three seem to lead back to a man named Dominick Medina, a popular Member of Parliament. Hannay uncovers a dastardly plot involving hypnotism and the black arts, as well as the more earthly crimes of blackmail and profiteering. (Review to follow)

Tell Me Where You Are by Moira Forsyth (advance review copy, courtesy of Sandstone Press)

The last thing Frances wants is a phone call from Alec, the husband who left her for her sister thirteen years ago. But Susan has disappeared, abandoning Alec and her daughter Kate, a surly teenager with an explosive secret. Reluctantly, Frances is drawn into her sister’s turbulent life. 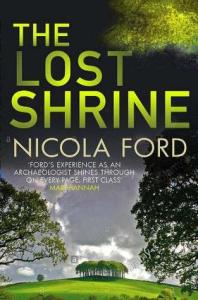 Clare Hills, archaeologist and sometime sleuth, is struggling to finance her recently established university research institute along with her long-time friend, Dr David Barbrook. When Professor Margaret Bockford finds the Hart Unit commercial work with a housing developer on a site in the Cotswolds, the pair are hardly in a position to refuse. There is just one slight catch: the previous site director, Beth Kinsella, was found hanged in a copse on-site, surrounded by mutilated wildlife.

Despite initial misgivings, Clare leads a team to continue work on the dig, but with rumours about Beth’s mental state and her claims that the site was historically significant refusing to be laid to rest, and lingering disquiet between local residents and the developers, progress is impeded at every turn. When one of the workers finds something unsettling, Clare suspects there may be more to Beth’s claims than first thought. But can she uncover the truth before it is hidden forever?

Been trying to catch up on the lovely #books I've received from @readersfirst These are the ones still patiently waiting #bookshelf #bookstagram #tbrpile
Look at the lovely paperback edition of Clare Carson's #thecanarykeeper courtesy of @headofzeus | Look out for my #bookreview as part of the #blogtour #bookstagram #bookpost #historicalfiction
Loved #TheGoodDoctorOfWarsaw so really looking forward to reading this one #thelostlightsofstkilda
Wonderful #bookpost today...the two books I'll be reading from the #dylanthomasprize longlist
My #BuchanOfTheMonth selection for 2020 - minus The Magic Walking Stick which I don't have a physical copy of #johnbuchan #readingchallenge2020 #ReadJB2020 #books
Fabulous #bookpost & #giveaway prize courtesy of @orionbooks #theforgottenlettersofestherdurrant by @kaytenunn2 #bookstagram

What Cathy Read Before