The Dollmaker by Nina Allen (eARC, courtesy of Quercus and NetGalley)

Stitch by perfect stitch, Andrew Garvie makes exquisite dolls in the finest antique style. Like him, they are diminutive but graceful, unique, and with surprising depths. Perhaps that’s why he answers the enigmatic personal ad in his collector’s magazine.

Letter by letter, Bramber Winters reveals more of her strange, sheltered life in an institution on Bodmin Moor, and the terrible events that put her there as a child. Andrew knows what it is to be trapped, and as they knit closer together, he weaves a curious plan to rescue her.

On his journey through the old towns of England, he reads the fairy tales of Ewa Chaplin–potent, eldritch stories which, like her lifelike dolls, pluck at the edges of reality and thread their way into his mind. When Andrew and Bramber meet at last, they will have a choice–to break free and, unlike their dolls, come to life.

A love story of two very real, unusual people, The Dollmaker is also a novel rich with wonders: Andrew’s quest and Bramber’s letters unspool around the dark fables that give our familiar world an uncanny edge. It is this touch of magic that, like the blink of a doll’s eyes, tricks our own. 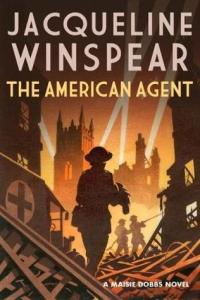 When Catherine Saxon, an American correspondent reporting on the war in Europe, is found murdered in her London digs, news of her death is concealed by British authorities. Serving as a linchpin between Scotland Yard and the Secret Service, Robert MacFarlane pays a visit to Maisie Dobbs, seeking her help. He is accompanied by an agent from the US Department of Justice – Mark Scott, the American who helped Maisie get out of Hitler’s Munich in 1938. MacFarlane asks Maisie to work with Scott to uncover the truth about Saxon’s death.

As the Germans unleash the full terror of their blitzkrieg upon the British Isles, raining death and destruction from the skies, Maisie must balance the demands of solving this dangerous case with her need to protect Anna, the young evacuee she has grown to love and wants to adopt. Entangled in an investigation linked to the power of wartime propaganda and American political intrigue being played out in Britain, Maisie will face losing her dearest friend – and the possibility that she might be falling in love again.

The Path of the King by John Buchan (hardcover)

What is the true root of royal blood?

A band of gold belonging to a young Viking prince is passed from generation to generation.

Follow this convoluted, yet heroic, path to the making of one of history’s greatest leaders. 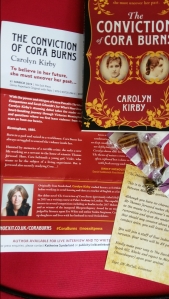 The Conviction of Cora Burns by Carolyn Kirby (advance review copy, courtesy of No Exit Press and Random Things Tours)

Cora was born in a prison. But is this where she belongs?

Birmingham, 1885.  Born in a gaol and raised in a workhouse, Cora Burns has always struggled to control the violence inside her.  Haunted by memories of a terrible crime, she seeks a new life working as a servant in the house of scientist Thomas Jerwood. Here, Cora befriends a young girl, Violet, who seems to be the subject of a living experiment. But is Jerwood also secretly studying Cora…?

With the power and intrigue of Laura Purcell’s The Silent Companions and Sarah Schmidt’s See What I Have Done, Carolyn Kirby’s stunning debut takes the reader on a heart-breaking journey through Victorian Birmingham and questions where we first learn violence: from our scars or from our hearts.

When Jane’s lover, Tom, returns from the navy to find her unhappily married to his betrayer, Jane is caught in an impossible situation. Still reeling from the loss of her mother at the hands of the witch-finder John Sharpe, Jane has no choice but to continue her dangerous work as a healer while keeping her young daughter safe.

But, as Tom searches for a way for him and Jane to be together, the witch-finder is still at large. Filled with vengeance, John will stop at nothing in his quest to rid England of the scourge of witchcraft.

Inspired by true events, Sunwise tells the story of one woman’s struggle for survival in a hostile and superstitious world.