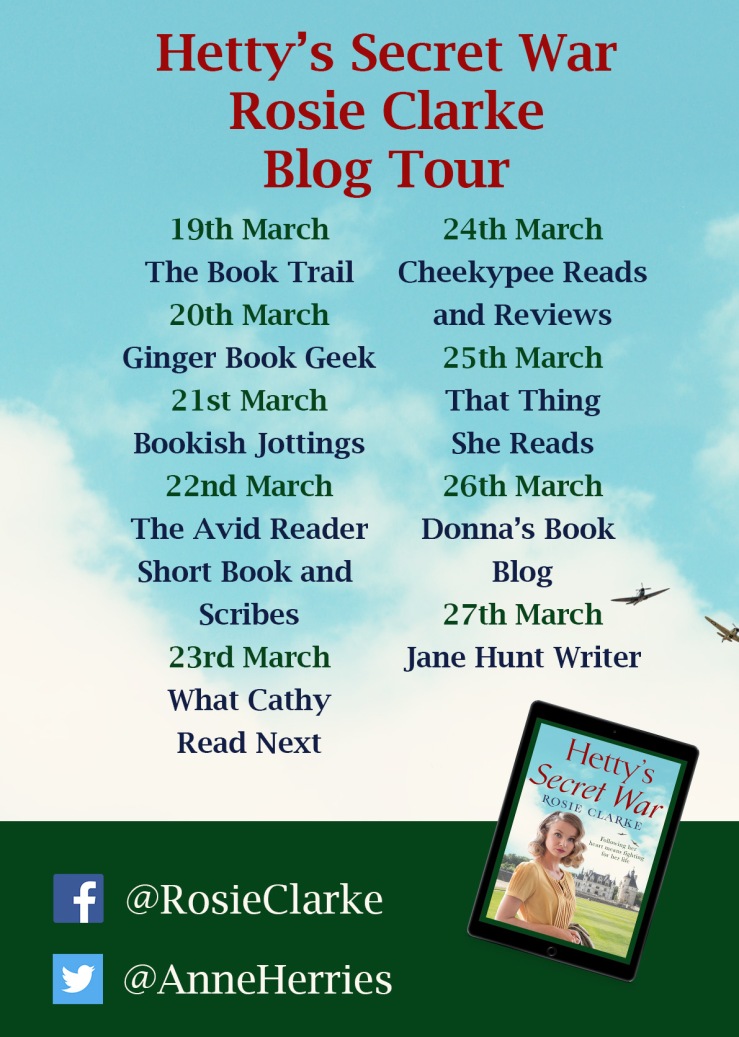 I’m delighted to be hosting today’s stop on the blog tour for Hetty’s Secret War by Rosie Clarke which was published by Aria on 19th March 2019.  Thanks to Vicky at Aria for inviting me to take part in the tour and for my review copy.

If you’ve missed previous stops on the tour, you can catch up here: 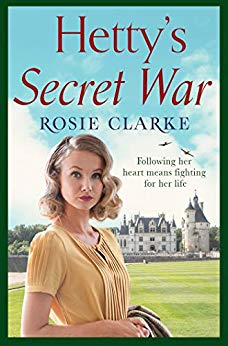 Hetty’s Secret War is the third book in Rosie Clarke’s ‘Women at War’ series.   I haven’t read either of the previous books in the series – Jessie’s Promise and The Runaway Wife – but I’m pleased to say Hetty’s Secret War works perfectly well as a standalone.  However, it does contain references to significant events in the two previous books so it wouldn’t be the place to start for readers planning to read the whole series.

The title and the book description give the impression that Hetty’s story is the main focus of the book but, although hers is certainly the most dramatic, the experiences of the book’s other female characters – Beth and Georgie – also play a major part.  And we shouldn’t forget Hetty’s brother, Ben, who also has a pivotal role in the lives of at least two of the women and whose wartime experiences contribute to a very dramatic and compelling element of the book.

The outbreak of war sees all three women forced to confront changes in their personal lives and the end of the war will see them confronting others.  The book takes readers on an emotional journey revealing the trauma and loss that war can bring as well as the terrible uncertainty about the fate of husbands, lovers, brothers, sons.   It also demonstrates the important contribution of women in wartime, some in roles which involved just as much risk as those on active service.  It also has a chance meeting to rival Casablanca’s ‘Of all the gin joints, in all the towns, in all the world, she walks into mine’, albeit with a bit of role reversal.

Talking of films, as someone who loves films set in World War 2, I particularly enjoyed Beth’s meeting with a handsome stranger on a train that could be straight out of the 1942 film In Which We Serve (directed by Noel Coward) in which ‘Shorty’ Blake (played by John Mills) first meets Freda Lewis (played by Kay Walsh) on a crowded train.

I know Hetty’s Secret War will delight fans of the series and also readers who like a strong element of romance in their historical fiction – and who aren’t adverse to a bit of bedroom action along the way with descriptions that at times leave little to the imagination.  Reading the book, I was most struck by its message of the possibility of second chances and that companionship, affection and trust play just as important a part in the success of a relationship as those ‘weak at the knees’ moments at the beginning of one.  Of course, the perfect solution is to combine both.  You’ll have to read the book to see if Hetty, Beth or Georgie end up in this happy situation.

I received a review copy courtesy of publishers, Aria, and NetGalley.

Rosie is happily married and lives in a quiet village in East Anglia. Writing books is a passion for Rosie.  She also likes to read, watch good films and enjoys holidays in the sunshine. She loves shoes and adores animals, especially squirrels and dogs.