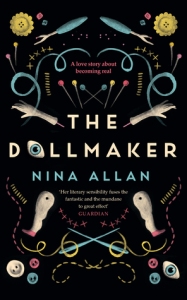 The Dollmaker by Nina Allen (eARC, courtesy of Quercus and NetGalley)

Stitch by perfect stitch, Andrew Garvie makes exquisite dolls in the finest antique style. Like him, they are diminutive but graceful, unique, and with surprising depths. Perhaps that’s why he answers the enigmatic personal ad in his collector’s magazine.

Letter by letter, Bramber Winters reveals more of her strange, sheltered life in an institution on Bodmin Moor, and the terrible events that put her there as a child. Andrew knows what it is to be trapped, and as they knit closer together, he weaves a curious plan to rescue her.

On his journey through the old towns of England, he reads the fairy tales of Ewa Chaplin–potent, eldritch stories which, like her lifelike dolls, pluck at the edges of reality and thread their way into his mind. When Andrew and Bramber meet at last, they will have a choice–to break free and, unlike their dolls, come to life.

A love story of two very real, unusual people, The Dollmaker is also a novel rich with wonders: Andrew’s quest and Bramber’s letters unspool around the dark fables that give our familiar world an uncanny edge. It is this touch of magic that, like the blink of a doll’s eyes, tricks our own.

The Road to Grantchester by James Runcie (eARC, courtesy of Bloomsbury and NetGalley)

The captivating prequel to the treasured Grantchester series follows the life, loves and losses of a young Sidney Chambers in post-war London.

It is 1938, and eighteen-year-old Sidney Chambers is dancing the quickstep with Amanda Kendall at her brother Robert’s birthday party at the Caledonia Club. No one can believe, on this golden evening, that there could ever be another war.

Returning to London from the war seven years later, Sidney has gained a Military Cross, and lost his best friend on the battlefields of Italy. The carefree youth that he and his friends were promised has been blown apart, just like the rest of the world – and Sidney, carrying a terrible, secret guilt, must decide what to do with the rest of his life. But Sidney has heard a call: constant, though quiet, and growing ever more persistent. To the incredulity of his family and the derision of his friends – the irrepressible actor Freddie, and the beautiful, spiky Amanda – Sidney must now negotiate his path to God: the course of which, much like true love, never runs smooth. (Review to follow)

Britain 455AD. The Roman Empire has fallen. As the daughter of a king and a priestess of the sacred grove, Anya’s life in Germania is one of wealth and privilege – until she dares to speak out against the high priest’s barbaric human sacrifices. Her punishment is exile.

Forced to leave her homeland, she sails to Britannia, to an island that is sliding into chaos and war, as rival kingdoms vie for power. Alone and far from home, Anya must learn to survive amidst the bloodshed, treachery and intrigue of fifth century Britain. Can she find a place to belong – a home, a hearth, a welcome?

The Night Tiger by Yangsze Choo  (eARC, courtesy of Quercus and NetGalley)

In 1930s colonial Malaya, a dissolute British doctor receives a surprise gift of an eleven-year-old Chinese houseboy. Sent as a bequest from an old friend, young Ren has a mission: to find his dead master’s severed finger and reunite it with his body. Ren has forty-nine days, or else his master’s soul will roam the earth forever.

Ji Lin, an apprentice dressmaker, moonlights as a dancehall girl to pay her mother’s debts. One night, Ji Lin’s dance partner leaves her with a gruesome souvenir that leads her on a crooked, dark trail.

As time runs out for Ren’s mission, a series of unexplained deaths occur amid rumours of tigers who turn into men. In their journey to keep a promise and discover the truth, Ren and Ji Lin’s paths will cross in ways they will never forget. (Review to follow) 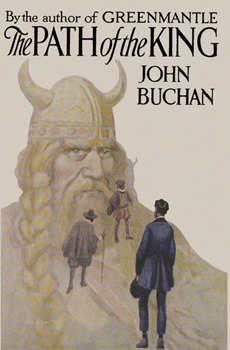 The Path of the King by John Buchan (hardcover)

What is the true root of royal blood?

A band of gold belonging to a young Viking prince is passed from generation to generation. Follow this convoluted, yet heroic, path to the making of one of history’s greatest leaders.