The autumn of 1933 is the most beautiful Edie Mather can remember, although the Great War still casts its shadow over the fields and villages around her beloved home, Wych Farm.

Constance FitzAllen arrives from London to document fading rural traditions and beliefs. For Edie, who must soon face the unsettling pressures of adulthood, the glamorous and worldly outsider appears to be a godsend. But there is more to the older woman than meets the eye.

As harvest time approaches and pressures mount on the entire community, Edie must find a way to trust her instincts and save herself from disaster.

Find All Among the Barley on Goodreads

All Among the Barley is definitely a book to lose yourself in and admire the quality of the writing and characterisation rather than expect a swiftly moving story line.   It’s also, I think, a book that is worthy of some reflection as there are ideas and issues explored that are not immediately discernible but subtly introduced by the author.  Like the onion that farmhand John enjoys between two pieces of bread during a break from the harvest, it has layers to be peeled away.

In Edie, Melissa Harrison captures all the uncertainty of early adolescence.  Edie has a sense that she wants more from her life than her mother and her siblings, but she doesn’t know quite what.  She also feels a strong loyalty and connection to the family farm. ‘Despite its privations I was happy to grow up there because I loved our land fiercely, every single inch of it – and because I knew nothing else.’  She even begins to believe that, in some strange way, the success of the harvest and the future of the farm is down to her.

When she meets the worldly and singular Connie FitzAllen, Edie initially falls prey to a kind of hero worship, seeing in Connie the possibility of a different kind of life, one less constrained by society’s conventions.  Ironically, Connie has a sentimental and bucolic view of the countryside, favouring the preservation of rural traditions over modernising initiatives that would relieve farming families like the Mathers of the repetitive, manual work that is their daily life. Like the reader, it will be only latterly that Edie learns Connie is not entirely what she seems and that her bright and breezy exterior hides some unpalatable attitudes.

After the measured pace of the rest of the book, I’ll confess I wasn’t completely sold on the rapid wrap-up contained within the epilogue.   However, I was definitely a fan of the wonderfully lyrical and closely observed descriptions of landscape and nature.

‘At dawn, the dew silvered the spiders’ silk strung between the grass blades in our pastures  so that the horses left trails where they walked, like the wakes of slow vessels in still water.’

‘It was full of the wheezing demands of newly fledged birds, the sky above us a hard blue vault where larks invisibly sang.’

‘The elders were in bloom, holding the creamy plates of their flowers up to the sky; somewhere deep in their green foliage wood-pigeons clattered and fought.’

All Among the Barley is one of the books in The Walter Scott Prize for Historical Fiction’s ‘Academy Recommends’ list for 2019.  I received a review copy courtesy of publishers, Bloomsbury Publishing, and NetGalley. I interspersed reading the book with listening to the audiobook version narrated by Helen Ayres. 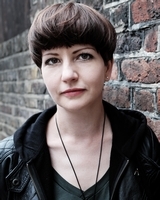 Melissa Harrison’s debut novel Clay won the Portsmouth First Fiction Award, was selected for Amazon’s ‘Rising Star’ programme and chosen by Ali Smith as a Book of the Year for 2013.  Her second novel At Hawthorn Time was shortlisted for the Costa Novel Award 2015 and longlisted for the Bailey’s Women’s Prize for Fiction 2016.  Rain, a work of non-fiction, was longlisted for the 2016 Wainwright Prize. A nature writer, critic and columnist for The Times, the Financial Times and the Guardian, she lives in London and Suffolk.  (Photo credit: Goodreads author page)

2 thoughts on “Book Review: All Among the Barley by Melissa Harrison”