The Path of the King is the third book in my John Buchan reading project, Buchan of the Month 2019.   You can find out more about the project and the books I read in 2018 here, and view my reading list for 2019 here. What follows is an introduction to The Path of the King.  It is also an excuse to show the lovely dedication in the front of my Nelson edition of the book (without dust jacket unfortunately).  I will be posting my review of the book later in the month.

The Path of the King was published in the UK in March 1921 by Hodder & Stoughton and in the United States on 15th June 1921 by George H. Doran, Buchan’s American publisher.  It also appeared in periodical form in Outward Bound magazine from October 1920 to October 1921 and in Adventure magazine from February to March the same year. 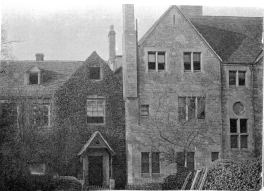 It was the first historical novel Buchan wrote at Elsfield Manor, the country house in Oxfordshire he had purchased in 1919 and which became the family home.  So devoted to the place was he that, on his death in Canada in 1940, his ashes were brought home to be buried in Elsfield churchyard.  (You can find out more information about Elsfield and the Buchan family’s life there here.)

Kate Macdonald describes The Path of the King as ‘a connected sequence of short stories’ and notes that Buchan and his wife, Susan, worked closely together on them.  Two stories from the book were later dramatised by Susan Buchan.  ‘The Maid’ was published in 1933 under the title, The Vision at the Inn: A Play in One Act and ‘The Wife of Flanders’ was published in The Bookman in 1934.

Buchan’s first biographer, Janet Adam Smith, describes The Path of the King  as historical fantasy inspired by his notion that ‘no man knows his ancestry and that king’s blood may lie dormant for centuries until the appointed time‘.  Beginning with a Viking’s son lost in a raid, the book traces the line of descent through the centuries to Abraham Lincoln with a golden ring being the outward symbol of the line of succession.   Kate Macdonald finds the first two stories ‘highly derivative’ but regards the third tale (the previously mentioned ‘Wife of Flanders’) as excellent.  David Daniell is more enthusiastic describing the narratives as ‘fresh and good’ and noting that the “feel” of many different atmospheres is well done.

The Path of the King was not a great commercial success.  Janet Adam Smith reports that it sold less than 10,000 copies in its first year and combined sales (for the Hodder & Stoughton and Nelson editions) had reached only 75,000 by 1960.    Compare that to the 355,000 copies that The Thirty-Nine Steps had sold by the same date.