I’m thrilled to be hosting today’s stop on the blog tour for Poetic Justice by R. C. Bridgestock and to share with you my review of this prequel to the much-loved and highly regarded ‘DI Jack Dylan’ crime series.  If, like me, you’ve not read the other books in the series, Poetic Justice is the perfect place to start.

Do also check out the fantastic guest post by the authors I published earlier entitled ‘Walking With A Dinosaur’.  Do you have the observational and deductive skills to be a detective? And, in case you missed earlier stops on the blog tour, you can catch up here:

Thanks to Emily at The Dome Press for inviting me to participate and for my review copy.  Also to Bob and Carol (AKA R.C. Bridgestock) for their brilliant support of the book bloggers taking part in the tour, including the very special personalised token of their gratitude. I’m honoured to be part of #TeamDylan. 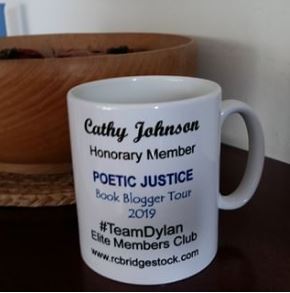 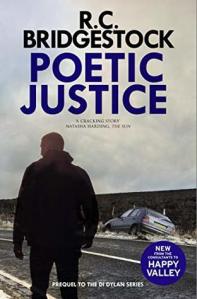 When Detective Jack Dylan heads home to his wife after a residential course, he has no idea that an extraordinary succession of events is about to turn his life upside down. A vicious, unprovoked personal attack is just the start. The discovery of his wife’s death in a road accident also reveals her affair, and his step-daughter is being expelled from university for drug use. Professionally, two teenagers have gone missing and one is soon found dead.

An ordinary man might break under the strain, but Dylan is no ordinary man. He knows that his survival depends on him carrying-on regardless, burying himself in his work, relieved by the distraction of newcomer to the admin department, Jennifer Jones.

His determination to pursue the criminal elements behind the events – both personal and professional – is to be his salvation, and his relationship with Jen, his ‘Guardian Angel’, will turn out to be the mainstay of his future, both within the Force and at home.

Life may have changed, but nothing will stand in the way of Dylan’s determination to seek justice.

I’ve observed previously that a prequel provides both opportunities and challenges for authors, although maybe more of the former than a sequel does.  The opportunities include the ability to delve more deeply into the past of the main character, to explain the background to decisions or actions they may take in later books, to fill in more of their back story.  The authors have certainly taken full advantage of this opportunity in Poetic Justice.

The main challenge is that the author can’t change what is going to happen in later, already written, books.  It’s no spoiler to say that the reader knows however dangerous the situations in which he finds himself, Jack Dylan isn’t going to die in Poetic Justice but, of course, he doesn’t know that.  And, of course, the same doesn’t necessarily apply to those around him…

Soon after being introduced to DI Jack Dylan, the reader becomes aware that his marriage to Kay is in trouble and that Isla, his adopted daughter, is in a precarious mental state.  Unfortunately for Jack, tragedy and turmoil will follow – as if the life of a police officer wasn’t challenging enough already.  I’ll admit I found it hard to have sympathy for Kay who seems to be trying to ‘have her cake and eat it’ although even she doesn’t deserve what transpires.   I found it much easier to empathise with Isla who is going through a tough time but whose inner goodness and touching relationship with Jack nevertheless shines through.

In Jack Dylan, the authors have created a character who is principled, incorruptible (although some may try), diligent, determined and has an eye for the details that others may miss. (On the latter point, you may want to read/reread the guest post by the authors I published earlier.)

The authors’ knowledge of police procedure comes across clearly in the authentic detail but the story never gets bogged down in too much information or jargon.  Quite the opposite in scenes such as the dramatic opening to the book and the later powerful and moving scenes involving Jack, Kay and Isla.

Poetic Justice introduces the reader to characters who will no doubt feature significantly in future books in the series, notably new recruit Jennifer Jones who has a similarly troubled private life.  There’s also a side story involving vulnerable children that, unfortunately, is all too reminiscent of real-life events in the news over the past few years.

I really enjoyed Poetic Justice. It’s gritty, atmospheric and full of drama.  It’s only fair to warn you that by the end – like me – you’re likely to be adding the other books in the series to your wishlist!

Try something similar: The Last Thread by Ray Britain (read my review here) 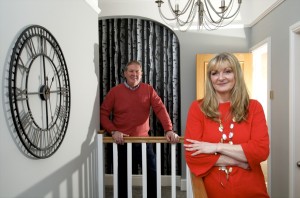 R.C. Bridgestock is the name that husband and wife co-authors Robert (Bob) and Carol Bridgestock write under. Between them they have nearly 50 years of police experience, offering an authentic edge to their stories. The writing duo created the character DI Jack Dylan, a down-to-earth detective, written with warmth and humour. The ninth book in the series will be published by The Dome Press in 2019, along with their backlist. A further crime series is presently being scripted by the pair, which has a strong Yorkshire female character – Charley Mann – at the helm.

Bob was a highly commended career detective of 30 years, retiring at the rank of Detective Superintendent.  During his last three years, he took charge of 26 murders, 23 major incidents, over 50 suspicious deaths and numerous sexual assaults. He was also a trained hostage negotiator with suicide interventions, kidnap, terrorism and extortion.

As a Detective Inspector he spent three years at the internationally acclaimed West Yorkshire Police Force Training School where he taught Detectives from all over the world in the whole spectrum of investigative skills and the law. On promotion to Detective Superintendent, Bob was seconded to a protracted enquiry investigating alleged police corruption in another force. He worked on the Yorkshire Ripper and Sarah Harper murder, and received praise from Crown Court Judges and Chief Constables alike for outstanding work at all ranks, including winning the much-coveted Dennis Hoban Trophy.

The couple are the storyline consultants/police procedural on BAFTA-winning BBC1 police drama Happy Valley and series 3 of ITV’s Scott and Bailey, and are presently working with Scott Free Production scriptwriters on two commissioned TV drama series.

Carol started and chaired the Wight Fair Writers’ Circle in 2008, along with Bob, where she created an annual charitable community writing competition to inspire others of all ages. This event has raised over £10,000 for Island charities.

The couple pride themselves on being up-to-date on past and present day UK police procedures, and as a result, Bob is regularly sought by UK television, radio and national and local newspapers for comment on developing major crime incidents etc. They have also taken part in BBC Radio 4 (Steve) PUNT P.I.

Together they can regularly be seen as speakers at a variety of events in the literary world and work with colleges in schools in providing writing seminars and workshops, and they also work with International TV/Film make-up artist Pamela Clare, to help inspire her students at the White Rose Colleges.